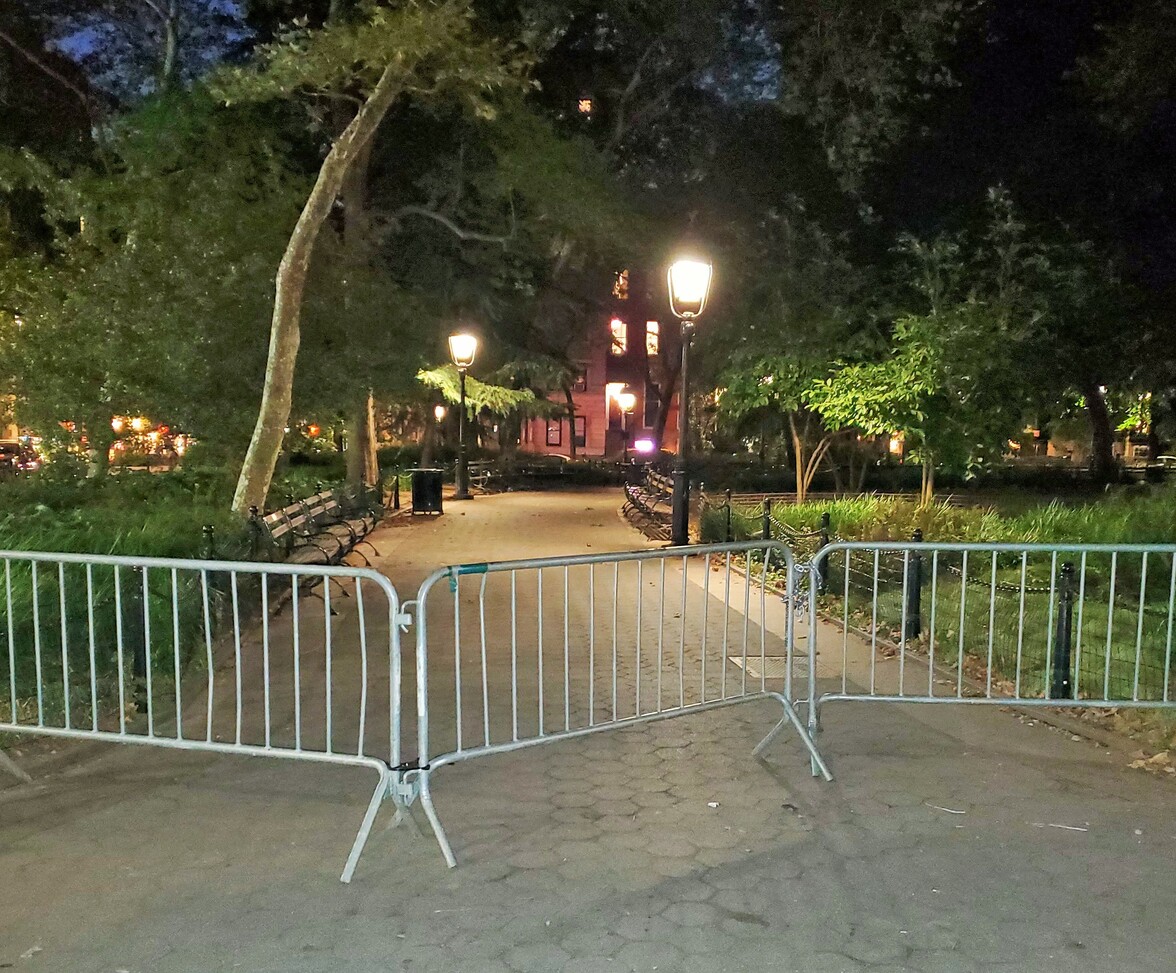 The park's northwest corner was gated off and empty — except for of course rats — on Friday evening Aug. 19. (Photo by The Village Sun)

Washington Square’s ‘drug corner’ closed off; N.Y.U. denies it made the call

“There was a major sweep apparently tonight in the park,” a local block association leader told The Village Sun. “We were told it’s in anticipation of all the N.Y.U. students about ready to arrive.”

Asked where he heard this, the man said, “Our network in the area sharing info.”

The park’s northwest corner was indeed closed off Friday evening around 6:30 p.m. In general, the park was a pretty mellow scene. For once there didn’t seem to be any weed sellers at tables around the fountain. There were only a few skateboarders, probably partly since “Ghostbusters” was playing for free on a screen in their usual stomping ground on the south side of the arch.

However, N.Y.U. spokesperson John Beckman, said the local grapevine got it wrong — though added that the university does feel the corner is “a particular source of concern.”

“What you ‘heard’ is incorrect,” he told The Village Sun. “N.Y.U. did not request that the northwest corner of the park be closed, nor any part of the park, for that matter.

“I don’t think it is going to come as a surprise to anyone that the northwest corner of the park has emerged as a particular source of concern in terms of quality of life issues,” Beckman said. “N.Y.U., like a lot of the park’s neighbors, has been concerned about quality of life issues in and around the park and has been collaborating with other groups and stakeholders on making the city aware and in seeking a multipronged approach from the city that can ensure that the park can be safely enjoyed by all users. But those collaborative consultations have likewise not involved asking for any part of Washington Square — a public park — to be closed.”

On Friday night, some of the people who might normally be hanging out in the northwest corner could instead be found on park benches just outside the metal gates cordoning of the usually sketchy area.

One sober-looking guy who gave his name as Drake said he “shoots by now and then” to the park to play cards and chess just for fun. But there were no games going this evening. The chess hustlers were elsewhere.

“It’s Friday night,” he said. “Most of the guys go to Union Square. I guess there are more tourists.”

Asked about drugs in the park and the surrounding streets, he didn’t feel the situation was that bad.

“I’ve been coming to this park like 40 years,” he said. “This was never a hot crime spot.”

Yet, at the same time, he assured it would be impossible to wipe out drug dealing and drug use in the area.

A few feet away, a man sat rigidly on a bench, clutching a small stack of dollars with both hands. A guy came and stood over him. Some small gray chunks were dropped into the sitting man’s lap. Eventually, the man started smoking a small, straight pipe, its end glowing in the dark. Then he passed the pipe back to the standing man. The sitting man smoked several more times, exhaling thin white clouds with a faintly chemical smell. Each time aferward, he handed the pipe back to the standing man.

“I remember it, early ’80s,” Drake recalled, “they were selling coke and smack out here. … The only thing that’s different is that the park looks dirtier.”

The Village Sun has also reached out to the Sixth Precinct about the closure of the park’s northwest corner.