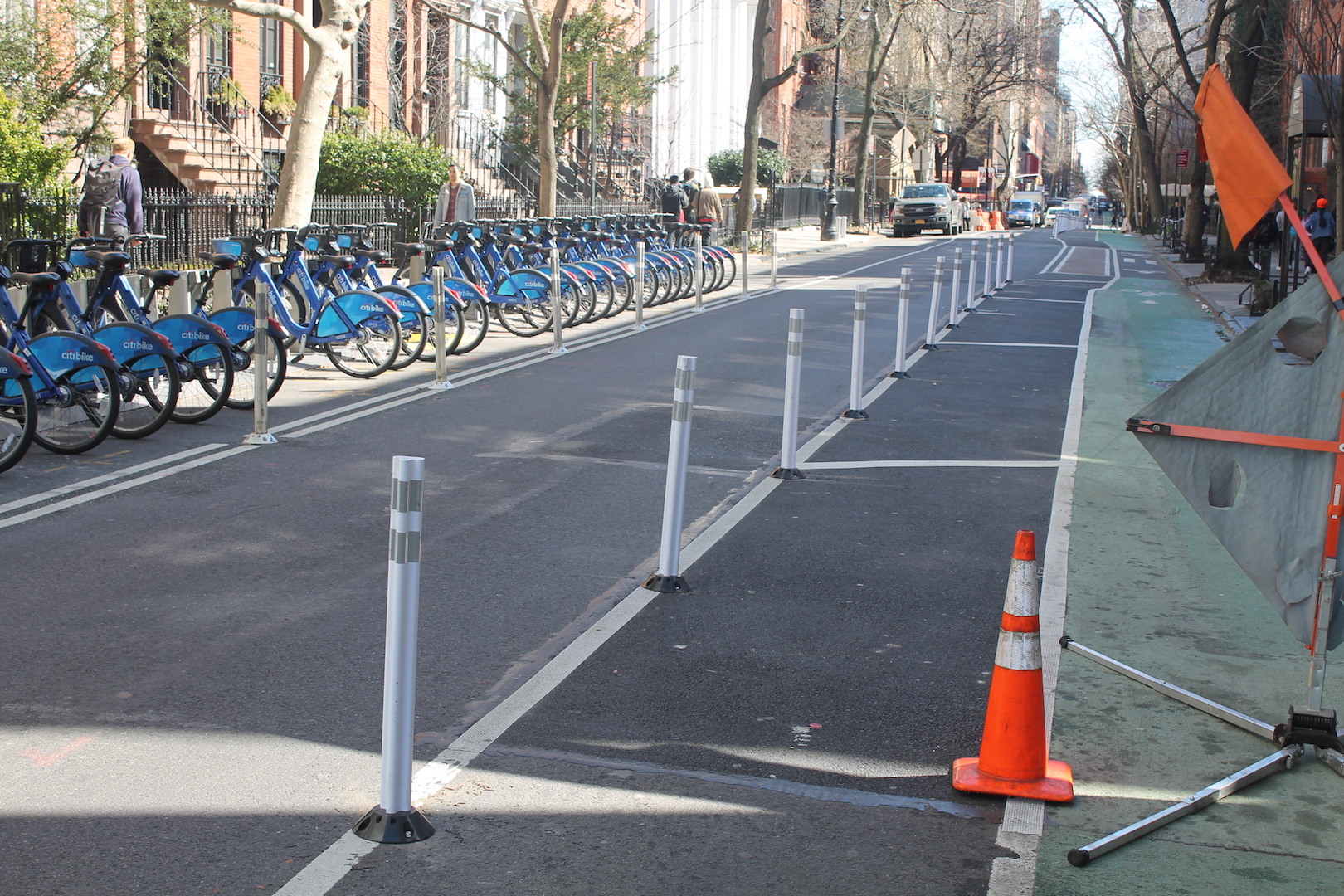 Newly installed bike-lane delineators on W. 13th St. between Sixth and Seventh Aves. near the former E. 13th St. Presbyterian Church. Down the block, brown paint in the buffer zone marks where a drop-off space has been left for City and Country School. (Photo by The Village Sun)

Many residents on 12th and 13th Sts. are still steamed from having crosstown bike lanes added on their side streets last year.

But now they’re hitting the roof all over again after the city recently beefed up the lanes’ protective pylons — specifically, on 13th St. between Fifth and Sixth Aves. and also between Sixth and Seventh Aves.

When the novel crosstown bike lanes were first installed, they were separated from the single lane of moving traffic by a striped buffer zone, plus widely spaced flexible plastic “delineators,” as they are known among transit officials.

Vehicles — such as ambulances, for example — could easily drive through the roughly 20-foot-long spaces between the delineators if they needed to access the curb or skirt a traffic jam. And, of course, drivers could simply roll over the bendable bollards, as well.

But, with all the newly added delineators, the space between them has shrunk to around just 7 or 8 feet.

Up until now, the buffer areas also have been plagued by drivers using them for parking.

Whether the new slew of delineators is to prevent cars from entering the bike lane or parking in the buffer zone — or both — local residents are fuming over them.

On the other hand, crosstown bike lanes are a rarity in Manhattan — and biking east to west without them can be deadly — so cyclists naturally favor any increased protections for them. The issue was tragically highlighted when two cyclists were killed in the same month, July 2017, while riding crosstown in the W. 20s.

But local residents say they find the bike lanes and the new street infrastructure dangerous, as well.

“These additions to local side streets are making it more and more challenging for those of us who live here,” complained Elissa Stein, a steering committee member of the 14th St. Coalition.

“Imagine trying to get out of a car and into a wheelchair, or a parent dealing with little children and strollers, needing to navigate through those delineators, in order to get to the curb,” she said. “And before [even doing] that, people have to survive bike lanes that are more than ever traveled by bikers going the wrong way, electric bikes and scooters flying down streets, riders at night with no lights. Streets are getting more challenging for too many.

“Having [the delineators] far apart makes it easier for cars/trucks to get into the buffer lane for deliveries and dropping people off,” Stein added of the situation before. “What’s going to happen now?”

David Marcus, a founding member of the 14th St. Coalition, downplayed the extent of the buffer-zone parking problem. And he slammed cyclists as “transients” just passing through the ’hood.

“This is an assault on our community and the quality of our life for a transient minority by a city that has no regard for neighborhoods,” he said.

“No one is ‘parking’ in that area except Department of Transportation and CitiBike vehicles,” he said. “If anything, it’s FedEx, UPS and restaurant deliveries that pull in to avoid blocking the pitiful one remaining traffic lane. At best, it is used for curbside drop-offs and pickups.

“Those vehicles are likely to roll over those bollards because they can, or worse yet, stop in the traffic lane and further exacerbate the traffic backups we are already experiencing due to the ill-advised 14th St. car ban.

“They gave no notice,” Marcus added of the delineator deluge.

The activist decried the bike lanes, in general, which admittedly serve a relatively small percentage of city travelers and commuters, according to D.O.T.’s own 2019 Mobility Report.

“D.O.T. continues to assault our neighborhoods, deny us access to our homes and destroy the quiet aesthetic of our historic streets in favor of a 1-percent-of-all-commuters-bike-riding constituency,” he said.

Shirley Secunda, chairperson of the Community Board 2 Traffic and Transportation Committee, said the board, too, was blindsided by the bevy of bollards.

“We were not informed either,” she responded by e-mail to a concerned resident’s alarmed query about the issue.

She added “It’s particularly surprising, because D.O.T. has been working on a program to give more curbside access for deliveries, drop-offs and pickups for people and cabs — so it seems contradictory.”

Secunda also noted that D.O.T., Sam Schwartz Engineering and New York City Transit will be returning to the local community boards next month to give the second quarterly report on data for the 14th St. busway, so that would be a good time to find out more about the new delineators and their intent.

The 12th and 13th Sts. crosstown bike lanes — like the 14th St. no-cars busway — were intended to lessen the transit burden of fully shutting down the L train for East River tube repairs. But after the L plan was scaled back to just a partial shutdown, the bike lanes were still kept.

Around noon on Thursday, a man who was delivering meat was parked on the bike lane on 13th St. near Fifth Ave. outside Parsons School of Design. He sat in the oversize RAM pickup truck as his worker made the drop-off to Mapi empanadas restaurant across the street.

“It’s crazy,” he said of all the new delineators.

As for his parking in the pedaling path, he said, “I really don’t have an option. Yeah, I know I’m in the bike lane.”

He admitted he had motored right over the flexible posts so that he could stand in the bike lane. But he said that, when he left, he would go through a larger space farther down the block that had been left between the delineators.

The driver, who declined to give his name, claimed the parking signage on the north side of 13th St. had also been changed. However, a sign there said metered three-hour parking for commercial vehicles was allowed. There were no empty parking spots on that side of the street, though.

The Village Sun is reaching out to D.O.T. and Council Speaker Corey Johnson’s office for clarification on the increase in the delineators on the two blocks and whether other blocks along 12th and 13th Sts. can expect the same.

Correction: The original version of this article incorrectly paraphrased Shirley Secunda saying she was surprised that D.O.T. had added so many delineators since Community Board 2 last month passed a resolution asking for a study on increasing curbside access for Amazon, FreshDirect and similar deliveries, plus for-hire vehicles. In fact, Secunda was referring to a D.O.T. program to increase curbside access and was not referring to the C.B. 2 request.