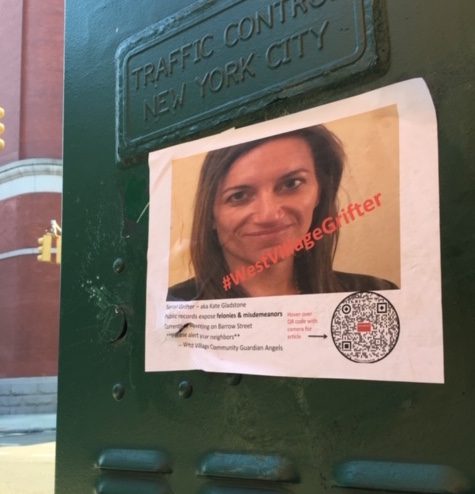 Posters of alleged "serial grifter" Kate Gladstone a.k.a. Katherine Klein have been plastered around the West Village as a warning to potential future "victims." (Photo by Arthur Schwartz)

BY THE VILLAGE SUN | Grifter alert!

Posters were recently plastered around the West Village warning people about a woman who has been dubbed a local “serial grifter.”

Heidi Russell, who lives on Barrow St. in a two-bedroom apartment, said that for a year roommate Kate Gladstone has refused to pay her $2,000-a-month rent or move out.

In a letter this June pleading for help from Governor Cuomo, Russell related that Gladstone moved in in June 2019 and was only supposed to stay for three months — yet only paid the first month’s rent and has since refused to vacate.

Gladstone, 44, is a Pittsburgh native who also goes by Katherine Klein. It’s reportedly not the first time she’s allegedly squatted in another person’s apartment in the Village area and refused to leave.

Among her previous victims is Matt Titus, a matchmaker and relationship expert who is a regular on TV talk shows. Titus sublet his 13th St. rented studio to Gladstone for a month but she wouldn’t leave afterward. He then had to rent elsewhere as he waited for his landlord to evict her.

In addition, according to Russell, three area hotels, including the Maritime and the Arlo, have banned the swindler.

The New York Post was the first to report about Gladstone.

This time, however, to Russell’s chagrin, despite her having obtained an eviction warrant against Gladstone, a judge recently ordered that Gladstone be allowed to stay in the Barrow St. apartment. The reason was the pandemic moratorium on residential evictions, which was recently extended through at least Oct. 1.

On top of it, Russell discovered that Gladstone has a rap sheet, including for charges of forgery and grand larceny in connection with stealing an ex-girlfriend’s credit cards to pay for hotel rooms.

The unwelcome roommate also has a 12-year-old daughter, who attends the 75 Morton St. middle school, which is reportedly another reason why the woman is refusing to budge.

Russell has filed several harassment complaints against Gladstone at the Sixth Precinct. Among them, she said, the squatter has spritzed her with liquids, including bleach.

Village District Leader Arthur Schwartz said he has been in contact with Russell for the past several months, following the postponement of Gladstone’s eviction due to the pandemic.

“I have been getting calls from the victim almost daily since April 1,” he said. “Gladstone does Airbnb, rents for a month, takes years to leave.”

Schwartz said Gladstone’s ex-girlfriend — on top of having her credit cards allegedly stolen by the chiseler — wound up having to pay Gladstone $20,000 to get her out of her Christopher St. apartment.

Similarly, though Gladstone was scheduled to be evicted from the Barrow St. home on March 31, she still had the gall to demand $24,000 to leave, according to Schwartz.

The uncomfortable situation has forced Russell — and her disabled dog, who she wheels around in a baby stroller — to spend as much time as possible outside of her apartment.

She sent The Village Sun photos recently taken on her rounds outside her home, writing, “This is a sample of my day out of the apartment. After I slept, I did work in my bedroom on my laptop. Then I go out from afternoon to late at night. I eat, wash and use the bathroom in our laundry room across the street.”

In her June letter to Cuomo, Russell noted that she and her partner — who is currently “stuck in Kiev” — had to spend more than $40,000, which they had to borrow, to secure the eviction warrant against Gladstone in January. In connection with the warrant, Gladstone had signed an agreement to leave by March 31 — but then the pandemic struck.

Russell wrote to Cuomo after being told by the Marshal’s Office that only the governor or mayor could lift the eviction moratorium. She stressed to the governor that her long-running case with Gladstone is actually “pre-pandemic,” so should be an exception to the eviction ban.

“How can you protect single-home owners in NYC who are victimized by a serial grifter who uses the stiff tenant-favored laws to repeatedly steal housing and intimidate homeowners while living in the home with the home owner?” Russell wrote Cuomo. “There were these daring grifters before the pandemic, and now they are taking advantage of the eviction moratoriums to continue to steal housing and terrorize homeowners.

“We want our home and life and security and safety back, but she WILL continue on to another victim,” Russell warned, continuing in her letter to Cuomo. “My partner is afraid to come home to this (she is stuck in Kiev handling her deceased mother’s affairs even before the pandemic hit); we are in debt, I have lost my job; we have a lender threatening foreclosure, so we have to be able to fix the apartment to show, which the grifter prevents us; we are behind seven months now on our maintenance because we lost our second bedroom income for 11, now going on 12, months; and the grifter terrorizes me with chemical sprays and incense my dog and I are sensitive to (which she knows); she uses her daughter as intimidation, and she stalks me in my own home spraying me, blocking me from my living room, kitchen and bathroom, all using fear that she will have her daughter accuse me of harming her. I have to use the bathroom in our co-op laundry room; I have to block the cracks in my bedroom door so chemicals don’t seep through. I have thousands of photos and hundreds of audio recordings I have had to take to protect myself from false allegations she uses as intimidation.

“We want to help prevent future victims from being terrorized and financially ruined in the Village and beyond,” Russell stressed.

She concluded by asking Cuomo to help get Gladstone and her daughter into permanent housing, for the sake of their own welfare.

In response to her letter to the governor, Russell received a reply from Dana Ferine, a spokesperson for the state’s Homes and Community Renewal agency.

Ferine wrote, in part, “The Tenant Safe Harbor Act, passed by the NYS Legislature and signed by Governor Cuomo, prevents evictions of New Yorkers who have suffered financial hardship due to the COVID-19 pandemic for nonpayment of rent accrued from March 7 until all pandemic-related government restrictions are lifted in a given county.”

In the meantime, Russell is hoping that politicians and judges “will see the light” and allow eviction warrants granted prior to the pandemic to be executed no later than Oct. 1.

She’s also thinking of organizing a protest outside her apartment to focus more coverage on the issue.

“This is the only way to put enough pressure on this serial criminal grifter to move on,” Russell told The Village Sun. “Also it would help raise awareness to the city of her grifting, and that grifters are taking advantage of the pandemic, as well as the horrific overextended tenant protections that hurt homeowners. This is a huge story with many fronts.”

Russell has also been working to find and encourage more victims of Gladstone’s squatting to come forward, with the goal of bringing a case to Manhattan District Cy Vance for possible charges of first-degree intent to defraud.