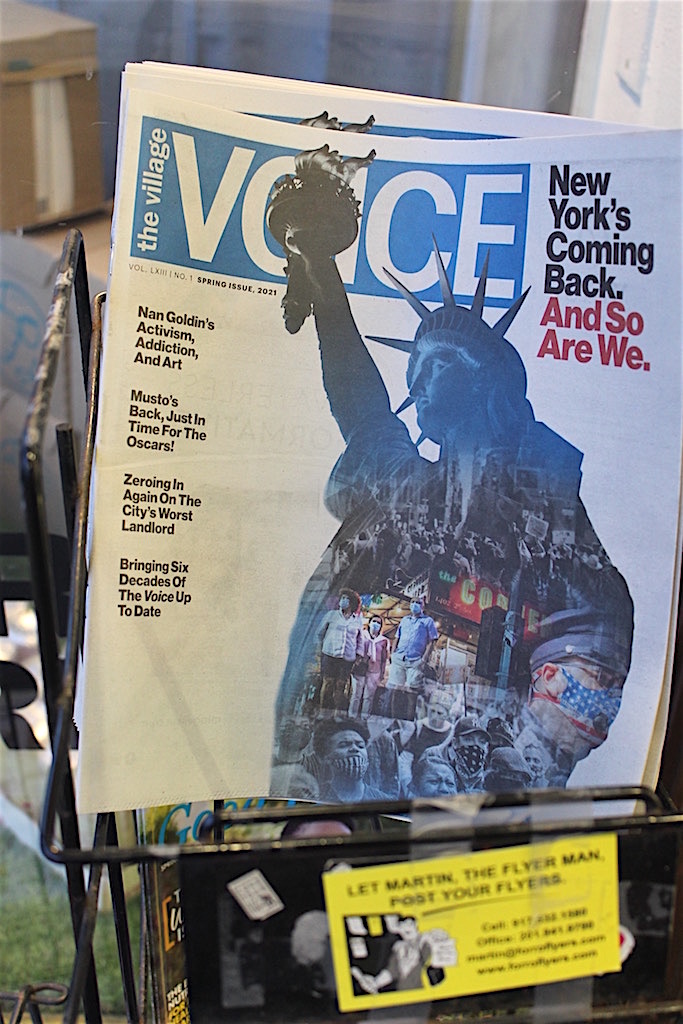 The spring print issue of the rebooted Village Voice, for sale outside a Greenwich Village store last weekend. (Photo by The Village Sun)

BY THE VILLAGE SUN | The Village Voice, New York City’s once-iconic alt-weekly newspaper, is back in print after a three-year hiatus.

However, the print version is only quarterly not weekly as in the groundbreaking countercultural paper’s heyday.

The new Voice’s spring issue hit the streets this past weekend. The relaunch features former Voice mainstays, like Michael Musto, giving his Oscar predictions, and an interview with photographer Nan Goldin. There is a “New York City’s Worst Landlord” feature article, plus pieces on how musicians and music club owners are rebounding from the pandemic. In addition, there is a “From the Archives” article by Peter Noel from 1998, “Driving While Black,” about racial profiling on the Jersey Turnpike, which is relevant today amid the country’s focus on police and race. Although the paper’s previous ownership had dropped sports coverage, the rebooted Voice in print has a sports page.

The Village Voice was founded in Greenwich Village in 1955, taking direct aim at the more staid existing community paper, The Villager. It printed its last issue in September 2017, featuring a classic photo of Bob Dylan giving a salute, by Fred McDarrah, on the cover. The following year, the paper ceased its digital operations.

At the end of last year, Brian Calle, the owner of LA Weekly, bought the Voice from Peter Barbey, announcing he would revive its print version, though limited to only four issues per year.

The spring issue of the tabloid is light on advertising, with eight pages out of its 40 being full-page ads and the rest all editorial content.

According to the publisher, the paper is being distributed to “select boxes around town, retailers, eateries, bookstores and apartment buildings.”

There is also an online edition with more content, heavy on arts and entertainment, along with articles from the Voice’s archives, plus sections, including “Cannabis Scene,” offering news about weed legalization and the business of pot, and “Dispatches From the Divide,” featuring reports on militias, gun nuts and the like.