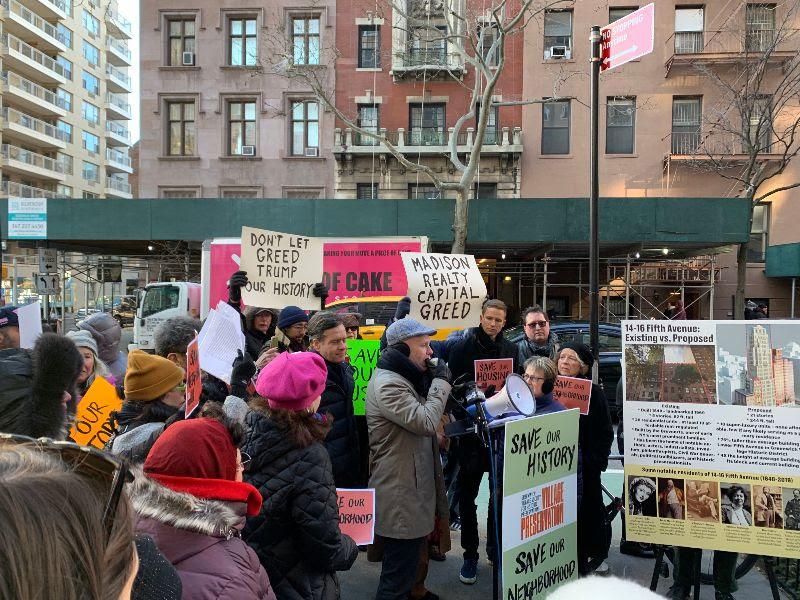 BY THE VILLAGE SUN | Village Preservation was joined last Friday by a host of local politicians, activists and fellow preservationists in decrying a plan by Madison Realty Capital to demolish a low-rise building at 14-16 Fifth Ave. in the landmarked Greenwich Village Historic District and replace it with a luxury tower more than four times its height.

The existing five-story building, which has 20 apartments, was constructed in 1848. Madison would replace it with a 244-foot-tall tower with just 18 units of super-luxury housing.

Those assembled condemned the proposed demolition of a historic building in a landmarked district, the inappropriate size and scale of the proposed replacement tower, and the loss of at least 10 affordable, rent-stabilized units in the building and their replacement with a smaller number of unaffordable units that would likely only serve as pied-à-terres or second or third homes for the super-rich.

The pols and preservationists spoke to the dangerous precedent the proposal presents for safeguarding the city’s landmarks. Meanwhile, tenant groups who have tangled with Madison Realty Capital spoke to what they called their harmful practices and poor treatment of tenants in other properties nearby.

“This outrageous plan is a slap in the face to our neighborhood, to our city’s history and to tenants and affordable housing advocates,” said Andrew Berman, executive director of Village Preseration. “To demolish a landmarked 170-year-old building which housed countless historic figures over the years and contained many units of needed affordable housing to make way for a high-rise pied-à-terre that will be grossly out of scale but actually contain less housing — and none of it affordable — is appalling. We urge the city and the Landmarks Preservation Commission to say no and to reject this application.”

“We cannot tear down the history of New York City and destroy affordable housing to make way for more luxury apartments,” Brewer said. “I am opposed to this development, and I will fight to ensure these buildings remain intact for future generations.”

“The Greenwich Village Historic District is known throughout the world for its beauty and unmistakable sense of place,” Speaker Johnson said in a statement. “It is our responsibility to ensure that this district is maintained and protected for future generations and to ensure than any new development is a complement to — not a subtraction from — the neighborhood’s historic fabric.”

“It shouldn’t be a surprise that one of New York’s worst landlords, Madison Realty Capital, is attempting to subvert the Greenwich Village Historic District by seeking a permit to build a luxury condo tower in our neighborhood,” Senator Hoylman said. “Madison Realty Capital has been a bad actor for years by pushing out rent-stabilized tenants to make quick profits for their investors, and our community is not going to roll out the welcome mat for their blatant greed.”

Added Assemblymember Glick, “While an application has been filed for a luxury tower on Fifth Ave. in the Greenwich Village Historic District, it remains to be seen how far this plan can advance. Historic Districts have been established to preserve neighborhood character — not to erode the sense of community — but to ensure that out-of-context intrusions like this proposal do not happen. This would be an unwelcome and thoroughly inappropriate development and entirely out of scale for this location.”

Sally Young of Tenants Taking Control, a coalition of tenants in buildings owned by Madison Realty Capital, said, “Tenants Taking Control has been dealing with Madison Realty Capital for over four years, since they helped finance the purchase of the 23 buildings in which we live. Madison’s vision for this part of Manhattan seems to be a preposterous and neighborhood-destroying ‘Midtown South’ for wealthy people. The attorney general has stated that Madison entered into a loan-to-own scheme with Raphael Toledano, in which TTC’s rent-regulated tenants were to be removed from our homes in the East Village. That didn’t work out for Toledano and it should not work out for Madison here in Greenwich Village. We say ‘No More!'”

Katharine Wolpe of Village Independent Democrats, Greenwich Village and the East Village’s largest Democratic Club, said, “Village Independent Democrats oppose the demolition of this historic building for a 21-story building putting additional pressure on city infrastructure. Landmark districts like this retain historic buildings to keep the character of historic neighborhoods. This destruction of our history and our housing is exactly the opposite of what this neighborhood needs.”

Because the existing building is located in the Greenwich Village Historic District, it can only be demolished if the city’s Landmarks Preservation Commission finds that the structure is of no architectural or historic significance, while the proposed replacement building must be found to be “appropriate,” in terms of scale, massing and design, for the site and surroundings. Madison Realty Capital has indicated it plans to argue both, while Village Preservation has compiled considerable research substantiating the historic significance of the buildings.

A hearing on the proposal at the Landmarks Preservation Commission has not yet been scheduled).

The building was constructed as two separate houses in 1848 by the Brevoorts, one of New York’s oldest and most prominent families. At that time, the houses led the transformation of lower Fifth Ave. into the most prestigious address in New York City. More details on the history of the building and historic figures who lived there can be found here and here.

In spite of the massive increase in height, the proposed new building would actually have less housing than the existing building, with just 18 super-luxury units, as opposed to the current 20, Village Preservation notes. Additionally, at least half of the units in the existing building were affordable rent-regulated units when Madison Realty Capital purchased it, including units housing low-income senior citizens. (Units in the building were enrolled in the Senior Citizens Rent Increase Exemption, or SCRIE, program).

Madison Realty Capital has also raised the ire of tenants in many of the buildings it has acquired in the East Village, where tenants claim the company has treated them poorly and warehoused affordable units. For more information on the affordable housing previously found at 14-16 Fifth Ave., click here.

A comparison of the existing and proposed buildings (including a visualization based upon a prior plan for the site by the same developer) and a summary and images of some of the historic figures who lived in the buildings can be found below.