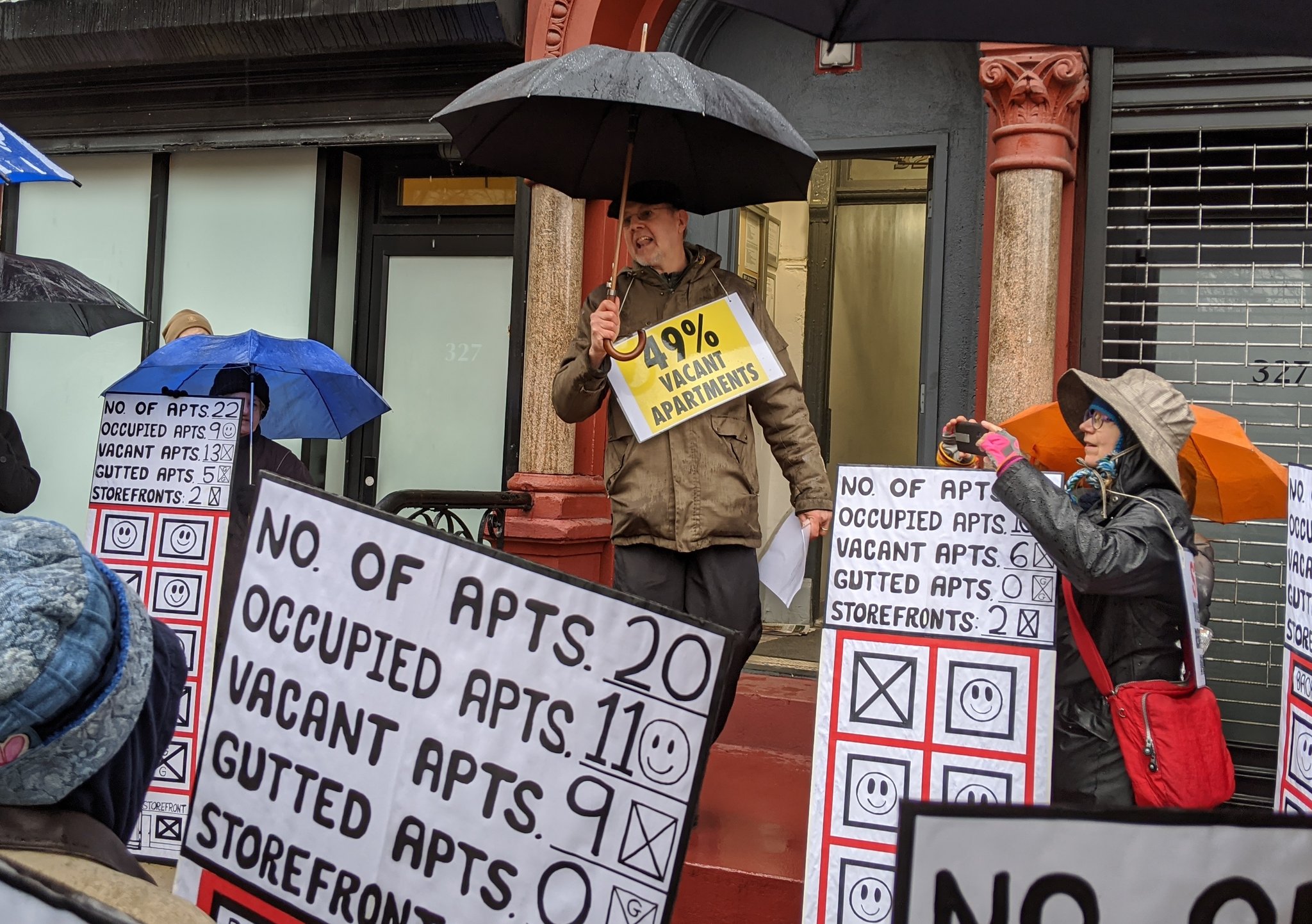 BY THE VILLAGE SUN | A real-estate private equity firm that owns 15 East Village buildings is warehousing nearly 50 percent of the rent-regulated apartments and must stop, tenants, housing activists and local politicians demanded at a rally on Tuesday.

The protesters gathered outside 325 E. 12th St., the offices of Silverstone Properties, which they say is the de facto office for Madison Realty Capital’s property management arm. Madison owns the building.

The group included Tenants Taking Control, formerly known as the Toledano Tenants Coalition. In 2017, Madison took over the buildings from Raphael Toledano. Toledano had bought the properties for $97 million in 2015. He reportedly owed a debt of $140 million to Madison, which paid him only $13 for the portfolio.

The protesters demanded that Madison Realty Capital sell the 15 buildings to a “nonprofit preservation buyer.” They said it’s increasingly common for property owners to let empty, rent-regulated apartments sit vacant in the wake of the state Legislature’s passage of the Housing Stability and Tenant Protection Act this past June, which increased tenant protections.

The biggest changes from the legislation were that rent-regulated apartments can no longer be decontrolled, meaning be taken out of the program, plus the end of the vacancy bonus for landlords. Previously, with the vacancy bonus, owners could jack up the rent as much as 20 percent after a tenant vacated a unit.

Despite the rain and chilly weather, the tenants picketed in front of the building for nearly an hour carrying signs and 5-foot-tall stanchions. The stanchions were modeled after their buildings and illustrated to indicate the number of vacant and gutted units in each tenement. The group chanted, “We need rent stabilization, not more speculation!” and demanded that Madison give tenants a seat at the table when discussing the future of their homes.

A survey conducted by tenants counted 136 vacant apartments across the 15-building portfolio, which contains a total of 279 apartments.

“It is unconscionable to keep these apartments empty, when affordable housing is so rare,” said T.T.C. member Beth Carey. “It seems like an attempt to avoid complying with the new laws. Maybe they’re waiting instead for legal challenges or legislative rollbacks, which T.T.C. will continue to oppose. Meanwhile, mold and vermin proliferate behind locked doors.”

T.T.C. members want the buildings to be sold to a nonprofit preservation buyer, which would offer available apartments to people who need affordable housing. They also say such a buyer would maintain the buildings better. Meanwhile, tenants claim the buildings contain many habitable but empty apartments. However, they say, many of these units, sporting plastic-covered doorways, are filled with debris and present security concerns and mold issues that are festering without serious attention.

“We have persevered for four long years — enduring an onslaught of insincere buyout badgering, construction as harassment, elevated lead dust, vermin infestations and unfair lawsuits,” said Sandra Mayer, a T.T.C. tenant and artist living on E. Fifth St. “We have watched our friends and neighbors be picked off one by one until these once-vibrant buildings stood dark and quiet. This community of working-class families and artists should not lose its spirit. It is our goal to bring back a solid base of rent-stabilized housing in the East Village. This story deserves a positive ending in favor of the people. So, we are asking that Madison Realty Capital sell these remaining 15 apartment buildings to a preservation buyer.”