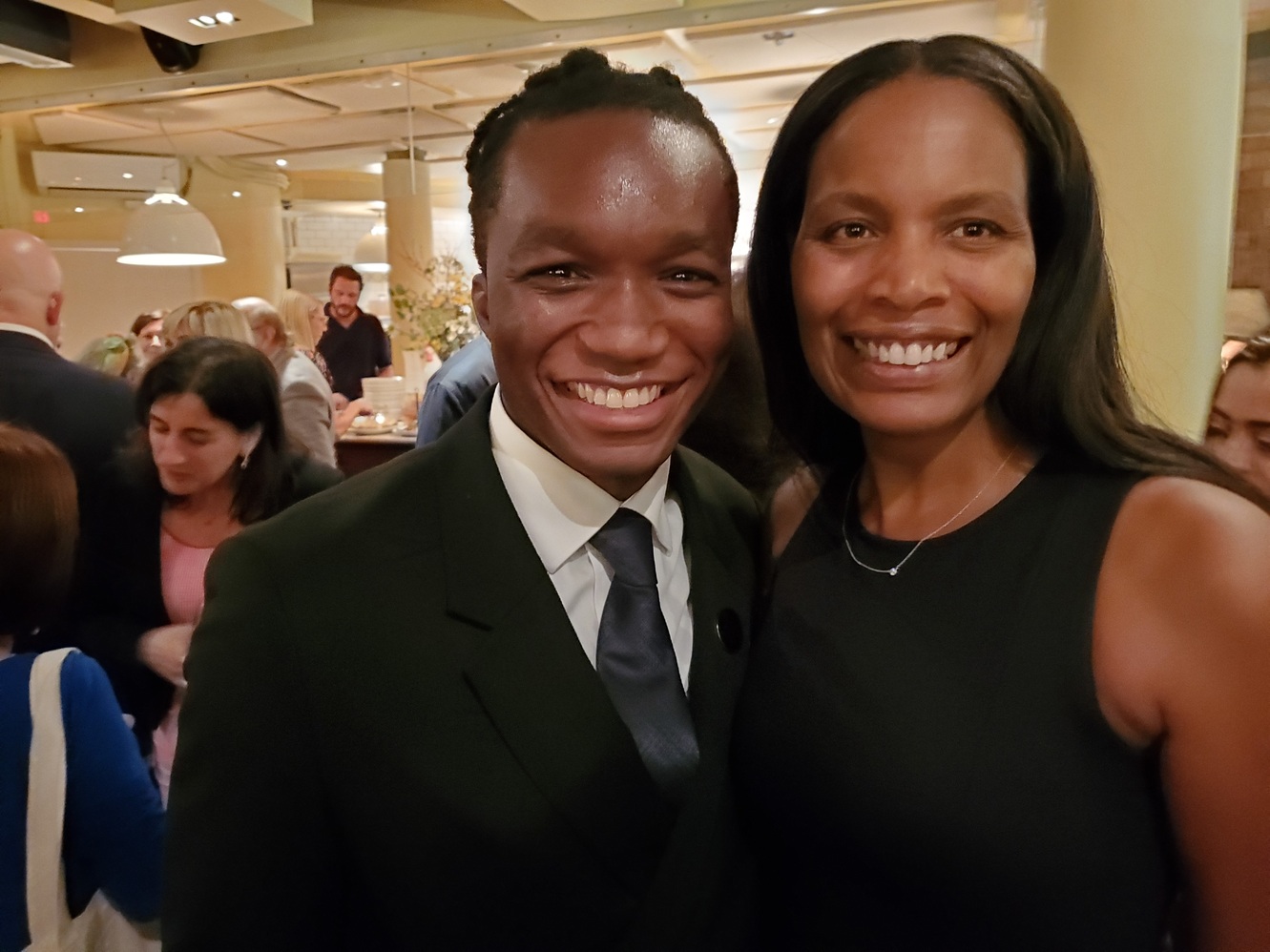 V.I.D. co-president Mar Fitzgerald, right, with Tevin Williams, who was the political director for Dan Goldman's winning congressional campaign in the August Democratic primary election. (Photo by The Village Sun)

This year’s event was titled, “Celebrating 65 Years of…Fighting for Your Rights.”

As usual, the place was packed with politicians, plus a slate of honorees, including progressive champions and community leaders.

The honorees at this year’s event included The Brigid Alliance, an organization providing free travel, food, lodging, child care and other logistical support for women seeking abortions; Laura Marceca, associate director of Adult Services at Greenwich House, who oversees Greenwich House’s five older-adult centers in the Downtown area; Kamau Ware, the founder of the Black Gotham Experience, which examines the African diaspora through art and local walking tours; and Kathy Slawinski, a former union official and activist and, for the past 10 years, V.I.D.’s recording secretary.

Marceca, in her remarks, touted the fact that Greenwich House recently opened up a new senior center at Westbeth Artists Housing — which itself is a NORC (naturally occurring retirement community) — and that Greenwich House soon will be opening up its Barrow Street building’s fourth floor as a “workforce center” for all adults. She poignantly recalled late V.I.D. member Tom Connor, who was a fixture at the Center on the Square, as “a mentor” to her who was passionately engaged with the political club.

For her part, Slawinski has led V.I.D. in staking out positions on the contentious East Side Coastal Resiliency project, renaming the Koch Bridge, the Soho/Noho upzoning, the Electoral College and immigration, and also organized a forum for the club on decarceration.

Cameron Krause, V.I.D. co-president, thanked Slawinski for always pushing the club to take even more progressive stances on the issues.

Councilmember Erik Bottcher, who is a V.I.D. member, gave kudos to Slawinski for her diligent work, noting light-heartedly, “Being the recording secretary sucks! Because you have to go home and type up what everyone said — and then you have to put up with, ‘I never said THAT!'”

Odile Schalit, executive director of The Brigid Alliance, noted appreciatively that New York has traditionally been a leader on abortion, recalling that the state “was a sanctuary for women three years before Roe v. Wade.”

Mar Fitzgerald, V.I.D. co-president — who grew up in and still lives in Westbeth — gratefully praised Ware’s work “to unearth the Black presence that I have lived in for 51 years.”

Ware, who did not attend the gala, gives several weekly walking tours focused on Downtown, colonial-era Black history. One of them, “Other Side of Wall Street,” details the Land of the Blacks, a free community that existed in Dutch New Netherland in the 1600s in what today is Greenwich Village, Soho, Noho, Chinatown and Little Italy.

State Comptroller Tom DiNapoli urged the crowd, “Don’t take anything for granted this election. We need a big turnout in New York City. That starts with V.I.D. Before you know it, it’ll be 2024 and we’ll be fighting for the White House — and let’s get some more Supreme Court justices, right?”

Also touching on the national picture, Assemblymember Deborah Glick took a shot at Senator Lindsey Graham, who in September proposed a national abortion ban after 15 weeks of pregnancy.

“I want to thank Lindsey Graham for making it clear that the Republican Party is anti-abortion,” Glick scoffed.

Dan Goldman, the Democratic nominee for Congress in Downtown Manhattan’s new District 10, thanked the storied political club for going to bat for him in August’s crowded Democratic primary election, which he won in a squeaker over Yuh-Line Niou.

“V.I.D. took a flier on me,” Goldman said. “They were the only club to support me. I would say, ‘Whenever I needed an ego boost, I would go to Abingdon Square.'”

During election season, Abingdon Square is one of the key spots where V.I.D. members can be found campaigning for the club’s chosen candidates. Clearly, Goldman felt the club’s backing was critical for him at the polls.

District Leader Vittoria Fariello, who was endorsed by V.I.D. in the August primary against state Senator Brian Kavanagh, also addressed the gala.

“I’m not going anywhere,” she assured the crowd. “The issues I ran on are still there.”

Rachel Lavine, Greenwich Village’s Democratic State Committee woman, stressed that it’s important for progressives and V.I.D. to maintain “a really human vision of politics — to move forward without dividing ourselves.”

Also among the crowd was Lavine’s wife, Roberta Kaplan, the attorney who argued for marriage equality on behalf of Edie Windsor in the U.S. Supreme Court, forcing the federal government in 2013 to recognize same-sex marriages.

Club co-president Fitzgerald reminded everyone that — with the key midterm elections approaching on Tues., Nov. 8 — V.I.D. on Wednesdays would be hosting congressional candidates in out-of-district and out-of-state races via Zoom, followed by text-banking and phone-banking to get out the vote in those areas.