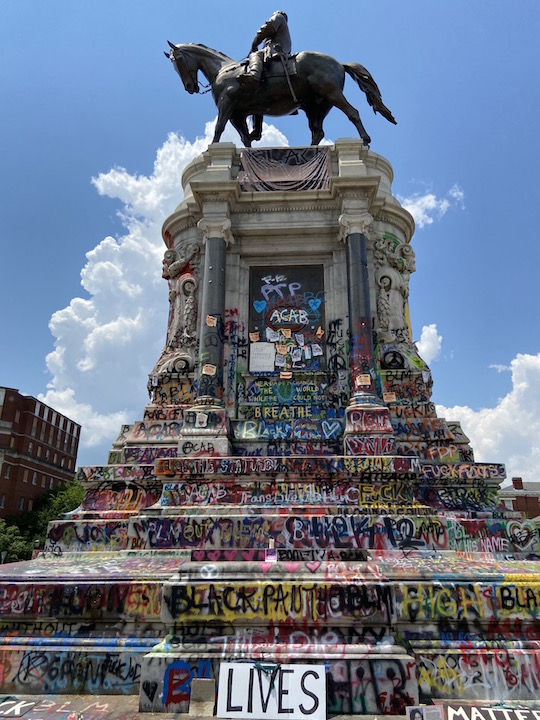 The Robert E. Lee statue in Richmond before its removal on Sept. 8.

So sang Levon Helm in The Band’s “The Night They Drove Old Dixie Down.”

A towering statue of the Civil War Confederate general that was installed in Richmond, Virginia, in 1890 was removed from its graffiti-caked pedestal by workers, as a crowd of onlookers cheered. The contentious monument will be moved to a storage site.

Chris Ryan, an East Village filmmaker, bicycle activist and musician, traveled to the southern city to document the statue’s removal and people’s reactions. He shared some of his videos with The Village Sun. Ryan is the husband of Allie Ryan, who is running for City Council in District 2 on the independent Neighborhood Party line.

In recent years, the 21-foot-tall bronze public artwork, located in the Confederacy’s former capital, had become a lightning rod for protesters, who condemned it as a symbol of slavery and white supremacy. The Lee statue was part of a national debate on monuments with racist historical associations and connotations.

Following the police-involved killing of George Floyd in Minnesota in May 2020, Virginia’s governor, Ralph Northam, declared the statue would be taken down. Clearing the way, last Thursday, a judge dismissed a legal challenge that had been mounted to block the removal.

Meanwhile, the New York Post reported that former President Trump, for his part, hailed the Lee monument as “magnificent,” “very famous” and “a beautiful piece of bronze sculpture,” and blasted its removal as a “complete desecration.”