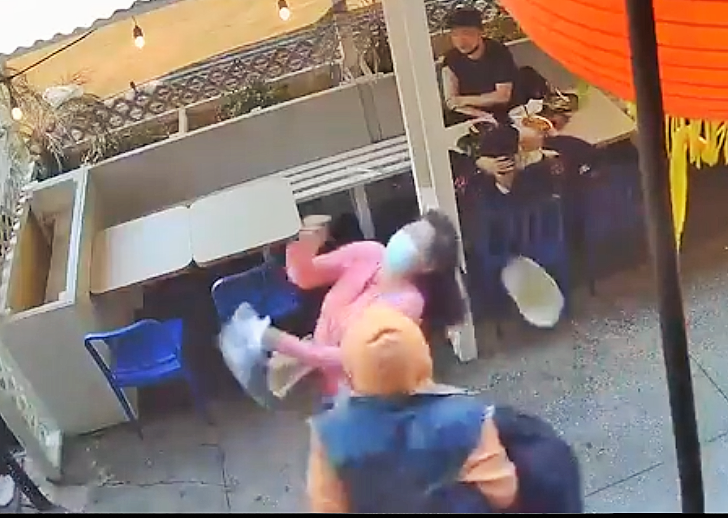 The moment the attacker punches the unsuspecting pedestrian in the face. (Twitter)

Video: Asian woman viciously slugged in the face in Chinatown in latest attack

In yet another shocking unprovoked assault on an Asian American, an unsuspecting woman was randomly slugged in the face Monday afternoon by a man as she walked down a street in the heart of Chinatown.

A video shows the victim, 55, wearing a pink top and dangling a plastic bag, walking breezily down Bayard St. near Mott St. shortly after 6 p.m. Suddenly, a man comes up out of nowhere and gives her a sweeping left hook. There’s a sickening smack as he connects with her face.

The woman puts a hand up in defense, but too late, and her hat flies off as she goes sprawling to the ground, where she slumps motionless against an outdoor dining structure outside of Kong Sihk Tong cafe, at 65 Bayard St.

This was just sent to me from my constituent. This just happened in my district in Chinatown. He has been arrested and our precinct is investigating. pic.twitter.com/sxNfCbrlza

Turning toward shocked witnesses, the unhinged attacker then yells, “What you hit me for?… Why you hit me?”

People rush to aid the woman as the attacker drifts out of frame. But, according to the New York Post, restaurant workers pursued the man, who cops said was arrested nearby at Bayard St. and Bowery. He was taken to Bellevue Hospital for psychiatric evaluation.

The arrested man was identified as Alexander Wright, 48, who lives in a homeless shelter on Wards Island, according to police.

He was charged with both assault as a hate crime and assault,  plus criminal possession of a controlled substance — K2, synthetic marijuana, which was reportedly recovered from him.

The victim was treated at NewYork-Presbyterian Lower Manhattan Hospital and was reported in stable condition.

About an hour after it happened, Assemblymember Yuh-Line Niou, who represents the area, tweeted out the video of the attack, which was filmed by the restaurant’s surveillance camera.

“This was just sent to me from my constituent,” Niou wrote. “This just happened in my district in Chinatown. He has been arrested and our precinct is investigating.”

Niou subsequently tweeted that the victim was “conscious and cognizant and alert.”

The video does not appear to show the attacker saying anything before bashing the victim, which would be a factor in whether it’s branded a hate crime. It’s not clear if he made any anti-Asian comments immediately afterward or once in police custody or at Bellevue. Police did not immediately say what qualified it as a hate crime, as opposed to merely a vicious random attack.

Chinatown activist Karlin Chan, posting about the incident, tweeted, “Random assaults by EDP’s getting out of control in NYC. Where and when will it end??”

“EDP” is police lingo for an emotionally disturbed person.