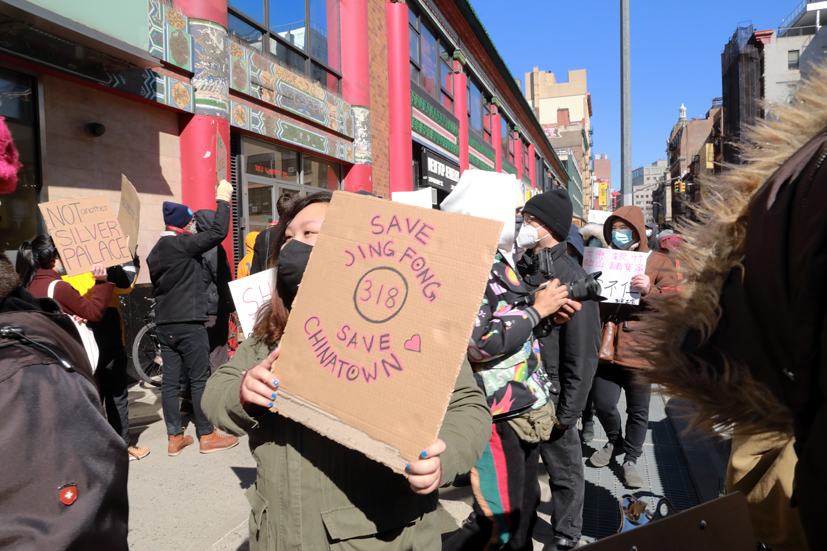 Protesting to save Jing Fong at a demonstration this past March. (Photo by Caitlin Kelmar)

BY THE VILLAGE SUN | Updated Tues., Dec. 7, 9:30 p.m.: Jing Fong, the legendary Chinatown dim sum palace, is reopening — but at a much smaller size.

The former restaurant space, which seated 800 people before, closed during the pandemic. The new place, at 202 Centre St., north of Hester Street, will seat just 125. Takeout will open in the next few days, according to the New York Post.

But former workers and their supporters who have been continuously protesting Jing Fong’s closure will keep on, declaring “the fight is not over” and demanding that the original space be reopened once again as Jing Fong.

In a press release, the 318 Restaurant Workers Union blasted the news, charging that Jing Fong’s scaled-down reopening “is still a loss for Chinatown.”

“Jing Fong’s reopening at a smaller location will not fill the void that landlords Jonathan and Alex Chu carved into the heart of Chinatown when they evicted the restaurant earlier this year,” the statement said, in part. “The former workers of the biggest dim sum hall in New York want to make clear that the fight continues to protect Chinatown and Lower Manhattan from greedy developers like the Chu family. The workers will continue to picket the Chu family businesses five days a week, including the Museum of Chinese in America (MOCA) where Jonathan Chu is co-chairperson of the board of directors.”

Meanwhile, if the contentious Soho/Noho rezoning is approved, the Chus are poised to cash in big time on their properties located in a corner of Chinatown that the city has deceptively redubbed “Soho East.”

Celebrity chef and director Eddie Huang recently came out in support of the picket. Although Huang, at one point, was going to go into business with Chu, he wrote on Instagram, “I pulled out of your project at 50 Bowery because someone alerted me to your greater plans in the neighborhood. You also mentioned several times how your intent was to raise property values and eventually turn over multiple blocks of Chinatown… I did not want to bring Bauhaus to your block and raise property values and be a gentrifier.”

The restaurant union and its supporters contend Jing Fong was not just some restaurant that could blithely be moved to a new spot.

“The size of the hall, its cultural, historical and personal significance for thousands of people, were deeply tied to the location of the space,” the press release states. “It was a unique economic engine for Chinatown, drawing thousands of people to the heart of this neighborhood every day.

“The closure of Jing Fong underscores the displacement pressures many longtime commercial and residential tenants in Chinatown and the Lower East Side are experiencing,” the union said. “For this very reason, the former workers of Jing Fong will stay on the picket lines as long as it takes for the Chu family to reopen the Jing Fong dining room.”

However, in a statement, Eric Phillips, a representative for the Chus, said the ongoing criticisms of them are false and “must stop.”

“The malicious lies about the Chu family are destructive and must stop,”  he said. “That the blatant and reckless amplifying of gross misinformation has incited physical threats against the safety of the Chu family and its affiliates is particularly disturbing and unacceptable during the current climate of AAPI violence.

“For more than four decades, the Chu family has created and supported countless jobs in Chinatown,” he added. “They allowed Jing Fong to remain in its old space for well over a year without paying a dime in rent and failing to cover even the real estate taxes due to the city and state. Jing Fong’s owners voluntarily surrendered the old location, reduced their workforce and should be held accountable for their business decisions.”