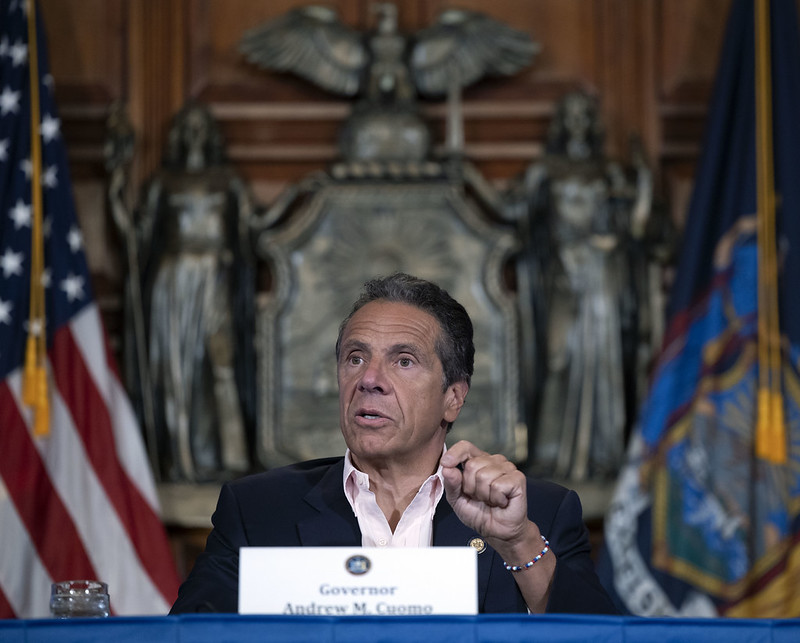 BY THE VILLAGE SUN | Busted!

On Fri., July 24, Governor Cuomo announced that 10 more place’s licenses had been iced that week, including Set L.E.S., at 127 Ludlow St., on the Lower East Side, and Cipriani Downtown, at 372-376 West Broadway, in Soho.

Leading the task force are State Liquor Authority Chairperson Vincent Bradley and State Police Lieutenant Colonel Dominick Chiumento. Businesses found in violation of COVID-19 regulations face up to a $10,000 fine per offense, while egregious violations can mean immediate suspension of a bar or restaurant’s liquor license.

The license of Set L.E.S. was suspended on Fri., July 24. The day before,  S.L.A. Chairperson Bradley conducted a compliance check of the Lower East Side watering hole, reportedly finding eight patrons drinking directly in front of the restaurant and about 30 more congregating near the premises, all without facial coverings and not practicing social distancing.

The place reportedly was operating “an obvious outdoor, self-service bar from a window — exactly the kind of service the [governor’s] executive orders and S.L.A. restrictions do not allow,” Cuomo’s press release noted.

In addition, Cipriani Downtown’s liquor license was suspended Thurs., July 23. According to the governor’s press release, following numerous complaints, the S.L.A.’s Bradley conducted a check of the Soho hot spot on July 21. During his visit, he reportedly observed 17 patrons drinking and standing around tables with no chairs in front of the business, most of them without facial coverings.

Bradley said he also went inside the restaurant and saw an employee behind the bar with no face mask, plus four patrons buying alcoholic drinks at the bar, in violation of the governor’s executive orders.

The New York Post noted that Cipriani Downtown was a “hunting ground” for disgraced and incarcerated movie mogul Harvey Weinstein.

“We are very proud of what New Yorkers did to flatten the curve of the virus, but we have to protect our progress because no one wants to do that again,” Cuomo said. “That’s why we’re watching the bar and restaurant violations and the congregations in front of these establishments, as we believe it’s connected to the increased infection rate with young people. We’ve tasked the State Liquor Authority and the state police to help local governments more aggressively enforce the law, and they are doing just that, with dozens of violations found last night alone.”

Among the other bars and restaurants in New York State whose licenses were summarily suspended last week, Queens led the pack with six and the Bronx and Deer Park, Long Island, each had one.

At Aqua, in the Bronx, Bradley said he observed 12 patrons having drinks inside the premises, which is currently not allowed in New York City. In addition, kitchen staff and servers were spotted without face masks, while patrons were also illegally puffing on hookah pipes both inside and in front of the premises.

On July 18, S.L.A. inspectors checking on Guaro’s Tapas Bar Lounge, in Jackson Heights, reportedly saw more than 20 patrons congregating outside in front without face masks or social distancing. The inspectors returned shortly before midnight — well past New York City’s 11 p.m. curfew for outside service — and allegedly found more than 25 patrons “in a nightclub-like atmosphere, with music blaring and patrons not wearing facial coverings or practicing social distancing.”

Kandela, on Cross Bay Boulevard, was cited for similar violations, including “dancing directly in front of the business…a DJ playing music outside the premises, creating a nightclub-like atmosphere where patrons were clustered…a bouncer and waitstaff serving patrons without facial coverings…[and] serving well past New York City’s 11 p.m. curfew for outside service.”

Meanwhile, outside of New York City, Secret’s Gentleman’s Club, in Deer Park, had its license suspended after an undercover inspection on July 17 by S.L.A. investigators and the Suffolk County Police Department.

The detail allegedly observed employees and patrons inside the club without facial coverings, including dancers performing while sharing the same stage pole and giving lap dances — violations of the governor’s executive orders and S.L.A. guidelines.

When the Secret’s owner was confronted by an S.L.A. investigator about the violations, he reportedly claimed it must have started without his knowledge after he had left. Yet the owner had already been caught on videotape buying drinks for the undercover agents and bragging about getting away with violating the executive orders.

Between July 21 and July 23, investigators from the governor’s new task force conducted 1,080 compliance checks across the state, documenting 84 violations. Since the start of the pandemic emergency, the S.L.A. has brought 443 charges against licensees statewide and imposed 33 emergency orders of suspension, immediately closing establishments in order to protect public health and safety. Queens has conspicuously had the most license suspensions.

On July 30, Cuomo announced seven more liquor license suspensions — in New York City, Westchester County and Erie County. Among the places nailed was Hi Life Bar & Grill, at 477 Amsterdam Ave., where patrons were reportedly observed being served inside under a permanent structure, a violation of the Department of Health’s interim guidelines for outdoor service.

Also among the scofflaws to have their licenses suspended after this latest round of inspections was the popular Bar Tabac, at 128 Smith St., in Carroll Gardens, Brooklyn.

“On July 24, investigators…observed seven employees [at Bar Tabac] without facial coverings, including the premises’ manager, a bartender, the host and four members of the kitchen staff,” a release from Cuomo stated. “The licensee was well aware of the requirements, with prior violations of the governor’s executive orders in June.”