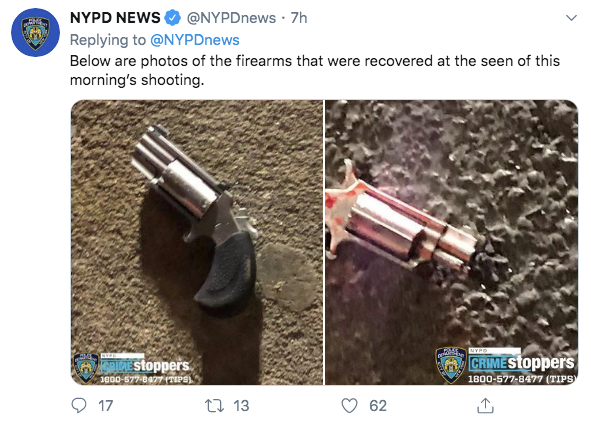 Two dead in shooting outside Avenue A hookah bar

Two men were fatally shot — one by police — after an argument spilled out of an East Village hookah lounge early Thursday morning.

According to reports, the argument started inside Hayaty, at 103 Avenue A, at E. Seventh St.

Two uniformed officers who were patrolling in Tompkins Square Park heard gunshots around 3:30 a.m. and responded to the scene, finding one man firing at the other.

The cops ordered the shooter to get on the ground but he reportedly refused.

“It was then the officers fired approximately three times at the male, striking him,” Terence Monahan, New York Police Department chief of department, said at a news conference.

Both men were removed to Bellevue Hospital where they were pronounced dead.

Two .22-caliber handguns were recovered at the scene, Monahan said. One firearm was recovered underneath the body of the shooter and the second gun was next to the other man. Although small caliber, the weapons are deadly.

The chief said the officers only shot the one man, not the guy he had been shooting at.

The officers’ body cameras were on and the footage is under review, he added.

The area was flooded by a large police presence after the incident, and police vehicles blocked off Avenue A and Seventh St. during the crime-scene investigation.

According to Monahan, the shooter had just spent eight years in prison for a prior shooting and was on parole. The two men’s relationship was not immediately known.