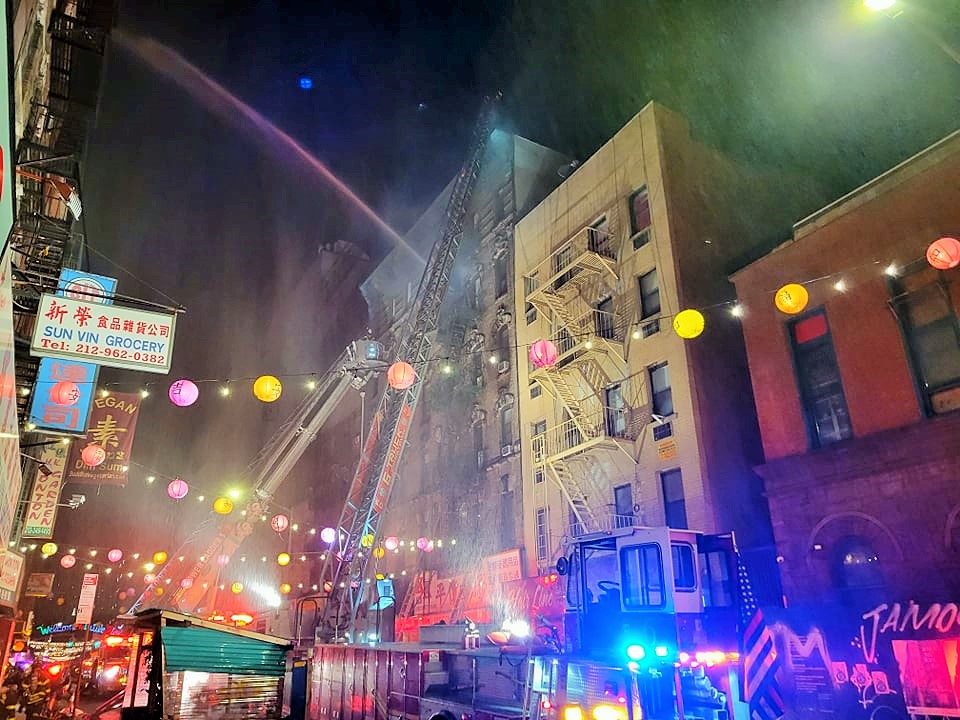 The major flames had been knocked down, but firefighters continued to bring the deadly Mulberry Street blaze under control around 4:15 a.m. Friday morning. (Photo by Karlin Chan)

BY KEITH J. KELLY AND DASHIELL ALLEN | Two people died and two firefigthers were injured in a fire that erupted in a six-story apartment building in Chinatown shortly before 4 a.m. Friday morning.

The flames at 78 Mulberry St., between Canal and Bayard Streets, were shooting out of a fifth-story window when firefighters arrived. It quickly escalated to two alarms as the fire spread to the sixth floor, eventually bringing 25 fire vehicles and 106 firefighters to the scene.

The fire was officially declared fully under control at 5:51 a.m.

Firefighters continued to bring the fire under control at 4:15 a.m. (Video by Karlin Chan)

Police said firefighters discovered two unconscious and unresponsive individuals in an apartment on the fifth floor, a 52-year-old male and a 91-year-old woman. The male was pronounced dead at the scene and the woman was transported to New York-Presbyterian Lower Manhattan Hospital, where she was later pronounced dead.

One firefighter was injured when a floor collapsed. He was transported to Cornell Medical Center with minor burns. A second firefighter refused medical attention at the scene. The Fire Department said its firefighting efforts were hampered by extreme clutter conditions inside the apartment but the blaze was deemed under control in two hours.

The identities of the deceased were not released pending notification of the next of kin. The Fire Department said the cause of the blaze is under investigation.

Assemblymember Yuh-Line Niou tweeted that the victims were mother and son.

Update on this morning’s fire…two people passed away. An elderly mother and her son in his 50s. Two other residents sustained some injuries along with two @FDNY fire fighters. DOB is still investigating & has let us know no vacate orders have been issued yet. https://t.co/34K91mGbhX

Meanwhile, local merchants with stores in the building or next door are dealing with major damages as a result of the firefighters’ efforts to put out the blaze.

Norina, the daughter of Ken Lee, owner of KK Discount Store,at 78 Mulberry St., said they rushed to the scene first thing Friday morning after learning of the fire.

“My parents rushed here to see what could be done,” she said.  “Unfortunately, everything has been damaged due to the water from putting out the fire, and ceilings are down, so it’s really unsafe for us to be in there now.”

The mom-and-pop shop sells houseware, from dishware to rice cookers, or as Norina put it, “We carry a little bit of everything that you might need at home.

“It was my father’s dream to open up his own business and Chinatown was the place to start it for him because it reminds him of home, which was Hong Kong,” she said. “And so now we’ve been here serving the community for over 30 years and it’s just unfortunate to see it come to this.

“We still haven’t processed everything emotionally. There’s still a lot of paperwork to deal with, but at this time we definitely don’t think we can open and operate within the immediate future. So we’ll just have to wait.

“Business for us has already been a challenge after 9/11 — and then with COVID, we really hit a low,” she said. “We weren’t open for three months, and that’s unheard of for us because we are open seven days a week all year-round.

“A lot of the nonprofit organizations have come and reached out to see what they can do to help, which we are very grateful for. But at this time we just don’t even know the extent of the damage. We know it’s heavy, it’s a lot, but we just haven’t had the chance to assess it yet.”

“We were able to go in and look at it, but it’s really dark inside,” she said. “The ceiling collapsed and there’s water on the floor.”

Her parents, who are from Guangzhou, China, opened the herbal medicine and tea store 30 to 40 years ago, she said.

“I grew up here,” she said. “I used to come here after class in elementary school. So this is a place that’s part of my childhood memories. And no one would expect what happened today, but a lot of buildings here are really old buildings. So when that happens it’s a disaster to anyone.”

Things had been starting to bounce back after the depths of the pandemic, she said.

“Everyone avoided Chinatown for a majority of 2020 and early 2021,” she said. “But I think a lot of these small assistance groups, like Welcome To Chinatown, really helped us bring back tourists to Chinatown. It got better — and then this happened.”

“I’m just really sad for the loss of life today,” she said, “and also for the many residents who lived here and who lost their possessions and now are displaced.

Welcome To Chinatown has set up a GoFundMe page to assist the victims of the fire, including residents and merchants. According to the page, “Donations will be used to fund services such as purchasing personal necessities, temporary housing, relocation costs for residential tenants, lost wages and inventory for commercial tenants.”