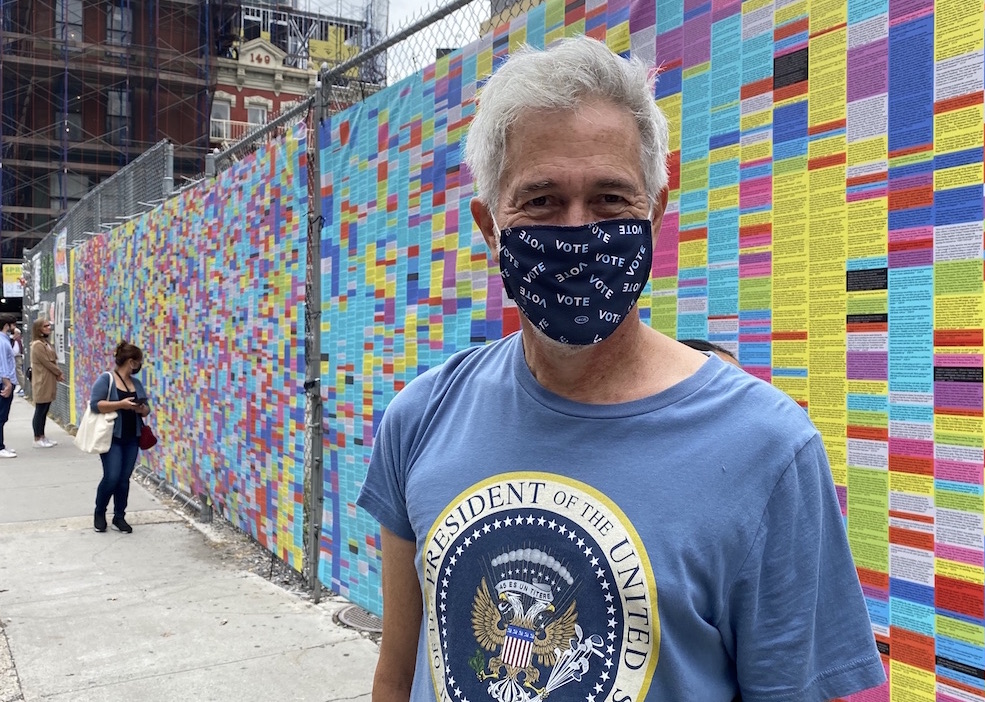 Artist Phil Buehler in front of the new Trump "Wall of Lies," at Grand and Lafayette Sts. (Photo by Daniel Miller)

Trump hits a wall — of his own lies — in Soho

BY THE VILLAGE SUN | The Trump “Wall of Lies” lives — and now in two boroughs, to boot.

After the initial outdoor mural — sporting thousands of the president’s fact-checked lies — was vandalized in Bushwick, Brooklyn, its creators have installed another one, on a chain-link fence at Lafayette and Grand Sts.

The piece is a collaboration by Tom Tenney, the executive director of Radio Free Brooklyn, and Bushwick artist Phil Buehler. Tenney initially had the idea of reading all of Trump’s lies in a 24/7 on-air radio marathon during the week before the election. But after the pandemic hit, instead of the marathon event, Buehler suggested turning the project into visual art.

The Donald’s lies during his term in office are listed in chronological order. Trump often lauds his own planned Mexican border barrier as a “big beautiful wall,” but this one in Soho really is aesthetically pleasing: His litany of lies are color-coded and broken out into categories — like Russia, immigration, environment, taxes, healthcare, coronavirus and Ukraine probe.

The Soho installation will remain up through Election Day.

Buehler has lived in Bushwick for more than 10 years, after prior stints in Chelsea and the West Village.

“We erected the new wall after the first one was defaced with ‘Vote Trump or Die’ and ‘Stand Back and Stand By’ graffiti,” the artist said. “It’s a collaboration with Tom Tenney and Radio Free Brooklyn, and they set up a GoFundMe campaign after the wall was defaced to replace it in Brooklyn. But after someone in the neighborhood covered the graffiti with spray-painted  hearts and ‘Love Thy Neighbor,’ the community thought we should leave it up as reminder of the division all these lies has caused and to use the money to build another one. So we found the perfect spot in Soho and put one up twice a big.”

Daniel Miller, first vice chairperson of Community Board 2, took photos of the “Wall of Lies” this past Saturday and shared them with The Village Sun.

“A short time after arriving, I felt a sense of relief,” he said of seeing the installation. “Accountability is on display. And it made me feel good. Our community shares a collective anxiety about the election. I got a small dose of anxiety reprieve when visiting this wall.”

When he’s not working on things like Trump “Wall of Lies,” Buehler mainly focuses on photographing abandoned places, which he tries to “bring into the present” through art installations or books. He also has gotten into doing photo “cycloramas.”

“Recently, I’ve been doing large-scale panoramic photographs of political places and turning them into cycloramas,” he said, “round rooms that you can walk into and be surrounded by the photo; places like Ferguson, Arlington Cemetery, Flint, Michigan, the border wall in Nogales, the Women’s March on Washington and, most recently, a Trump rally in Cincinnati.”

An archive of Buehler’s work documenting abandoned places can be seen on his Web site modern-ruins.com .