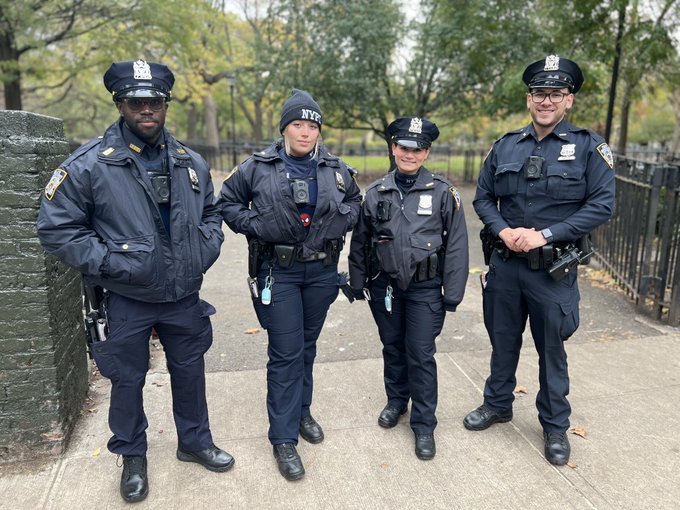 Police want to hear the community's concerns about the park. (9th Precinct / Twitter)

Tompkins Square Park drug use, curfew closure on the bill for meeting with 9th Precinct police

BY THE VILLAGE SUN | East Villagers will meet with Ninth Precinct police Thursday morning to discuss conditions in Tompkins Square Park. Also attending will be Assemblymember Harvey Epstein and Councilmember Carlina Rivera or their representives and contingents from Community Board 3 and city agencies.

According to a tweet announcement by the 9th Precinct, all “concerned residents” are invited to the meeting, which will be held inside the park, reportedly on the Ninth Street path near Avenue B.

Allie Ryan, a leader of the newly formed Friends of Tompkins Square Park group, told The Village Sun she’s especially concerned about seeing the park regularly closed for its nightly curfew once again. She said that since COVID broke out, the park has been closed at midnight only “inconsistently” due to what she called manpower issues at the precinct.

We are also using this medium to invite all concerned residents to Tompkins Square Park this Thursday, November 17th at 10AM to discuss community concerns in regard to the park. Come voice your concerns to us, your community board and local politicians and other City Agencies!! pic.twitter.com/kWQcJ7EdUw

Ryan — who recently filed to run for City Council in 2023 — said she is also concerned about increased heroin and fentanyl use in the park, which she said is leading to overdoses, sometimes fatal. Her husband, Chris Ryan, recently posted a video of a young man casually shooting up on a park bench in broad daylight.

On Aug. 28 around 8 a.m., as was reported by The Village Sun, Kevin Kleber, 39, who went by “Toasty,” was found dead on a park bench, slumped over on top of drug paraphernalia, according to police. The city’s Office of Chief Medical Examiner has not yet released Kleber’s cause of death or toxicology report.

Ryan’s Friends group recently did a trash cleanup in Tompkins Square Park and found a troubling amount of discarded hypodermic needles and crack vials around the place, including mixed in among fallen leaves on the ground.

Although the park has syringe-disposal boxes in the public restrooms, and a biowaste container is available at Seventh Street and Avenue A, obviously a lot of people are simply not using them after they shoot up, she said.

Former East Village activist John Penley, who now lives in Las Vegas, has lost close friends in New York to the OD scourge and is extremely concerned about fentanyl, in particular. He religiously scours sites like The Village Sun, EV Grieve and others to keep up with the local news. He said it’s time to go after the dealers peddling killer smack.

“The 9th Precinct needs to investigate all fentanyl OD deaths in the park, including past deaths, as homicides and not ignore the fact that these deaths were probably caused by Tompkins Square Park dealers,” he declared. “The dealers need to be aware that if their dope causes a death, they will be investigated and prosecuted. Stop sweeping these homicides under the rug, N.Y.P.D.”