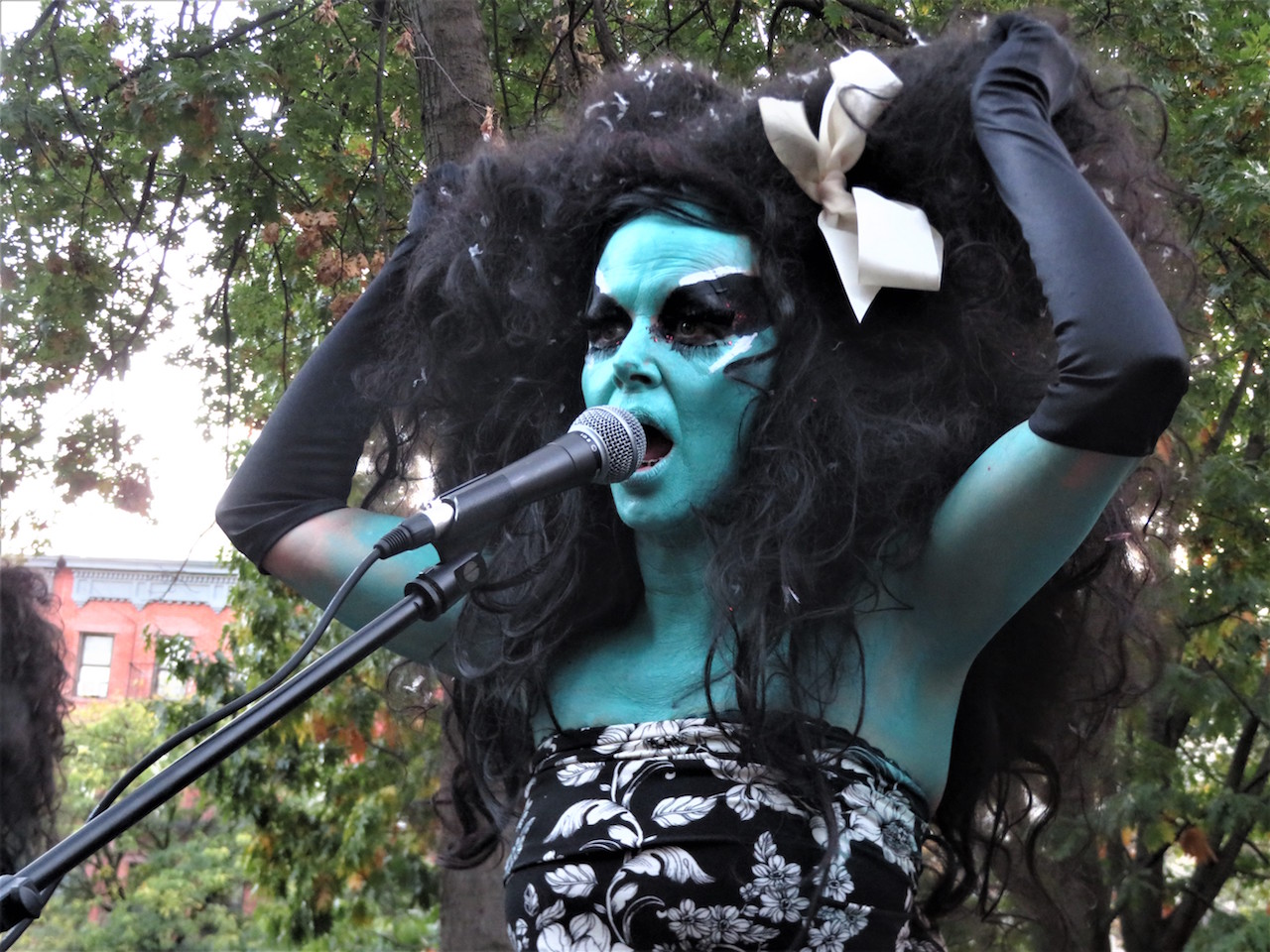 The Voluptuous Horror of Karen Black is on the bill for Sunday's planned show in Tompkins Square Park, though the Parks Department says it has not granted a permit for the event. An April 24 hardcore punk show in the park drew an estimated 2,000 people. (Photo by Everynight Charley Crespo)

BY LINCOLN ANDERSON | The embattled organizer of punk rock shows in Tompkins Square Park said he is ready to rock and roll — not just by putting on a punk concert Sunday, but also by going after media outlets that done him wrong.

Chris Flash is not backing down from his plan to hold a five-hour punk show in the East Village park on Sunday from 1 p.m. to 6 p.m. Hello Mary, Girl Dick, Sewage, Sea Monster, Wer and The Voluptuous Horror of Karen Black are on the band list.

Asked on Friday if he still plans for the show to go on, he told The Village Sun, “Yes!”

However, a Parks Department spokesperson on Thursday said, “We have not received a permit application for this event.”

But Flash, also speaking Thursday, said, “We’re going to have a permit. We’re going to have everything we need. It’s going to be by the book. We do clean shows, literally and figuratively. They know that. Everyone from the Parks Department to the parks manager knows that. … We’ll be receiving an N.Y.P.D. [sound] permit as per usual.”

Will the authorities allow the concert to happen? That’s drama number one.

Drama number is two is that Flash is suing the city and Parks Department in U.S. Southern District federal court for yanking his permits for a series of events that he had secured for 2021. The city made the decision after the big April 24 hardcore punk concert in the park, co-organized by Flash and Black N Blue Productions, that was attended by an estimated 2,000 people.

Infuriating Flash, the Parks Department told the media that the organizers had portrayed it as a 9/11-themed event. Parks sent media outlets Flash’s permit application for the event — but Flash charges that this application was “voided” after the department decided to deny them the Sept. 11 date for the event, instead switching it to April 24. There is an amended version of the application, according to him. Nevertheless, he says, some media — he singles out Gothamist and WPIX — ran with this story but did not attempt to reach him for comment.

Flash claims that, in another ethical breach, the voided application that Parks sent the media included his contact information, so these outlets had no excuse not to reach out to him directly for his side of the story. He says he knows the outlets had his contacts because one of them sent him the application.

“The application they received was not redacted,” he said. “They got a phone number, address and e-mail. They made NO effort to fact-check or verify.”

However, Joe Cammarata of Black N Blue, the April 24 event’s co-organizer, actually is given a chance to respond in an “Inside Edition” segment on the story, which also shows the burning Twin Towers.

In general, Flash says, he has been “smeared,” not just by Parks but also by the media, which he charges regurgitated the Parks version of the story without giving him a chance to respond.

Flash said he has asked Gothamist to revise or retract its article, but that it has, so far, failed to do so.

The Village Sun has reached out to Gothamist for comment.

“The amended application has no mention of 9/11 — amended application,” Flash stressed. “No one called to fact-check what the Parks Department was feeding them. This was a deliberate, organized smear campaign against us, and the media went right along with it. Obviously, they’re looking for content, sensationalism. They’re also exploiting the memory of those who died on 9/11.

“Only The New York Times had the integrity to not run with it because they knew it was unethical,” Flash said. “They did reach out [to us] and they realized there’s no story there.”

Flash said the original permit application, in fact, was for a 9/11-themed event — but that was for when the hoped-for concert date really was the 9/11 anniversary on Sept. 11, 2021, not after the event was moved to April 24.

“The posters said nothing, the Facebook [events page] made no mention of a Sept. 11 memorial,” he noted of the recent park punk-palooza.

The April Tompkins show raised around $6,000 for a firefighters burn center fund, according to the organizers. But, due to what Flash called the false accusations, the fund is now refusing to accept the money.

In short, Flash said, his attorneys advised him that Parks giving the media the voided permit was an “actionable offense.” He also said, according to the attorneys, the media’s misrepresentation of the April 24 concert as a 9/11 event is also “actionable.” And so, as a result, he’ll be taking action.

“It’s too late,” Flash said. “They were given ample opportunity to revise or retract the stories and were given the facts. They refused. Our attorney advises us that everything they’ve done is actionable.”

Beyond Parks’ disputed accusation that the April 24 concert was wrongly pitched as a 9/11 event, however, the department charges that the event also violated several mayoral pandemic executive orders, as well as the application agreement and park rules.

For starters, because of one mayoral executive order, the event’s size was supposed to be capped at 200, and, in fact, the application said only 100 people would come. But Flash says that it was impossible for them to predict six months in advance that 2,000 would show up. Other executive orders, according to Parks, mandated wearing face masks, social distancing and “no amplified sound in conjunction with a stage.”

But Flash said it was not realistic to expect them to enforce masking, for one, which can spark fights.

In terms of park rules and the application agreement, the Parks Department says the event was not allowed to bring in a stage, though did so. Also, according to Parks, while no alcohol consumption was allowed, “consumption was witnessed.”

But Flash noted that four cops were on hand during the April 24 show and did not issue any tickets for drinking alcohol.

In addition, he said he is still sore at Assemblymember Harvey Epstein, who walked into the park with his dog on April 24 and, in alarm, live-tweeted that the concert was a “superspreader” event.

“I cheered for him when he was elected,” Flash said. “I’m bitterly disappointed in Harvey Epstein. To gain a little bit of fame from a show in a park that lasted all of four hours and was clean as a whistle when we left. A lot of people at those shows are his constituents.”

Meanwhile, John Penley, a former East Village activist now living in Las Vegas, said he has been advising Flash, urging him to hold the concert. Penley said, his understanding is that Flash’s lawsuit is not seeking damages but merely the right to hold the concerts.

He recalled a similar situation in 2008 when police were denying a sound permit to the band Leftover Crack to play outside the East Village’s Ninth Precinct.

The band planned the performance as a protest over the police moving to shut down, based on decibel levels, the annual punk concert commemorating the 1988 Tomkins Square Park riots.

“They hate Leftover Crack because they used to do all kind of anti-cop songs,” he noted.

Penley and Jerry “The Peddler” Wade, a veteran squatter, sued, arguing that police would have to enforce decibel levels evenly for all events in the neighborhood. The judge ordered that the East Village crustcore band be allowed to perform in the street. The police backed off.

Penley said he was upset this past week to see that Pinc Louds and a high school prom with a three-piece band were kicked out of Tompkins for use of amplified sound without a permit.

“I spent so much of my life in it,” Penley said of Tompkins Square. “And so much of it was [protesting] over First Amendment issues in the park. And now we’re back to it again in Washington Square Park [with a curfew controversy] and Tompkins Square Park. It should be an exciting and interesting weekend down there. Those two parks are the ones they always go after.”