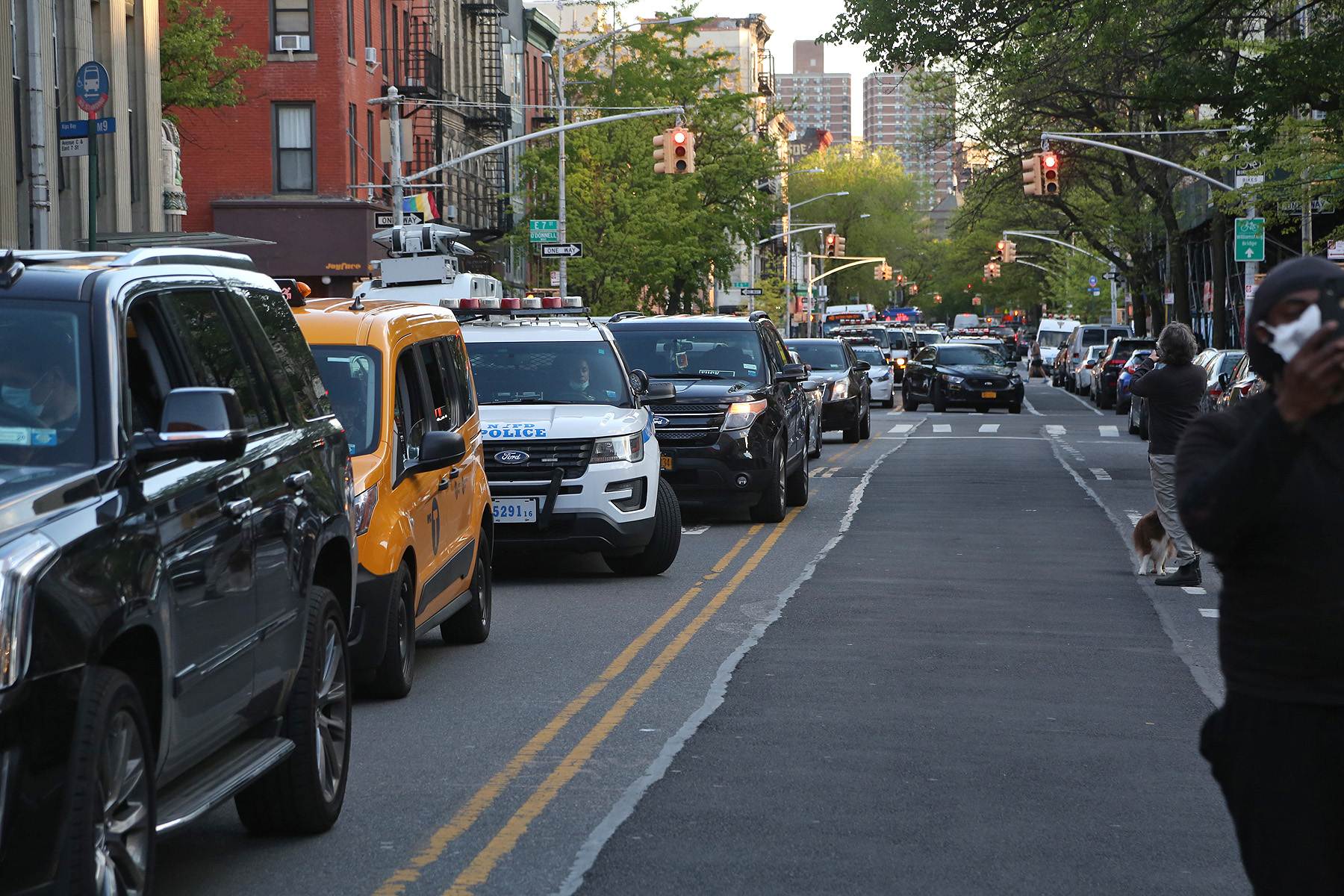 Traffic in the East Village on Avenue C. (The Village Sun file photo by © Jefferson Siegel)

BY LINCOLN ANDERSON | Charles Komanoff grew up a rabid Brooklyn Dodgers fan. So it’s not surprising that — with the fate of New York City’s congesion pricing initiative now in question — he would resort to a baseball analogy.

“I don’t know,” the leading transportation policy analyst said. “We put up a five-run first inning and that looks pretty good — and we’ve just got to carry that through nine innings. Now it’s 5-4, it’s the ninth inning, and the anti’s have a couple of guys on base. … The M.T.A. took a sure win and turned it into something that’s hanging in the balance.”

Komanoff, who is in his 70s and lives in Tribeca, created a congestion-pricing “model” that informed the current toll plan, which grew out of the FIX NYC panel that former Governor Cuomo created in 2017.

“It’s a beautiful, kaleidoscopic, spreadsheet model,” Komanoff crowed of the traffic model that he created. He noted it can be instantaneously adjusted to take into account a flood of Ubers or restauant sheds.

“It blows my mind that at my advanced age, they’re using my model to scope out congestion pricing,” he said, recalling when he initially sat down to talk with FIX NY members.

For the past 15 or so years, he’s been deeply committed to seeing a traffic-reducing toll implemented. But now, he’s getting that same feeling he used to have when, after a great regular season, Dem Bums would falter in the post-season to the accursed Yankees.

Last November, Komanoff was a panelist in an online forum on congestion pricing hosted by the Penn South Co-op, in Chelsea. The main concern at that forum — and top of mind for Komanoff at that time — was the issue of “carve-outs,” as in which drivers should get exemptions from or discounts on the congestion tax for driving into Manhattan south of 60th Street. Under the plan, which is still being finalized, the fee could be as high as $23.

Komanoff strongly argued back then, and still feels, that basically there should be no carve-outs or as few as possible, because otherwise the program would be weakened — both in terms of reducing traffic to Manhattan’s Central Business District and raising revenue for the Metropolitan Transportation Authority. The state Legislature has decreed that the tolling plan must raise $1 billion annually for the M.T.A.

However, the environmental assessment for the toll plan that was recently released by the M.T.A. was an utter disaster in Komanoff’s view, and the fallout from it is what has him nervous. (A few days after speaking to The Village Sun for this article, Komanoff laid out his traffic calculations in a post for Gotham Gazette.)

It was Pete Buttigieg, the U.S. Transportation secretary, who in March 2021 made the call that there should be an environmental assessment, or E.A., for the plan. Komanoff personally feels it shouldn’t even have been the feds’ decision but something that was left up to New York State.

The M.T.A. was tasked with doing the E.A. However, what the M.T.A. released a month and a half ago is what has now “made it a ballgame,” in Komanoff’s view. Usually, an E.A. is considered a less-extensive, and thus usually shorter, alternative to a full environmental impact statement, or E.I.S. But that wasn’t the case here.

“It’s like 46 volumes long,” he complained, “which is a little weird in itself. They had 16 and a half months to do it but they bungled it.”

Within all that confounding length there are some major problems that stick out, as Komanoff sees it.

“They vastly underestimated the extent to which the auto trips disappear” due to the tolling scheme, he said, citing, for example, trips from New Jersey to Queens: Some drivers simply wouldn’t want to make the longer drive that evading the toll would entail, the advocate notes.

“Some of those trips that now go from Montclair to Rego Park,” he said, “they’re not going to do that anymore. Some of those people will find another job where they don’t need to spend two hours on the road.

“There will be an increase in the traffic that will go around [the tolling zone], which is appropriate,” he admitted, “if you make it more expensive to drive through. But it is also true it will be faster and quicker to drive through [the zone].”

However, he fumed, “The E.A.’s conclusion of increased traffic in the Bronx and Staten Island is totally bulls—. And I’ve run the numbers!”

Specifically, he charged, “The E.A. has underestimated by fivefold the reduction of traffic — V.M.T., vehicle miles traveled — outside of the Manhattan core,” that the toll would cause. “They are impacted by the toll because fewer people are going to be driving into Manhattan from Connecticut, from New Jersey, from Montreal…from the North f—ing Pole,” he said, in exasperation.

“There will only be a 7 percent increase in the number of trips that go around [the zone],” he stated, with assurance. “That will be offset by the people who are going to switch to transit or disappear.”

The number of people per car would also increase under the toll — rising from 1.3 to 1.38, he said.

In addition to a bump-up in car pooling, the congestion tax would compel others to switch to mass transit and commuter buses, or simply choose to work from home.

Komanoff is an ex-math teacher and numbers are his thing. When he rides his bike, he’s constantly doing divisions and calculations with the numbers in cars’ license plates.

His facile mind for numbers and data informed the tranportation model that he created, and that is what made him a key adviser when the congestion tolling plan was hatched under Cuomo.

Now Komanoff is calling out the M.T.A. for the allegedly skewed numbers in its environmental assessment. While the authority estimates the toll would lead to an average reduction of 385,000 daily V.M.T. (with 200,000 at the low end and 750,000 at its highest), Komanoff argues the reduction in daily vehicle miles traveled would be much higher — 2 million.

Basically, he stresses, the wider metro region would see a greater reduction than what the M.T.A. study says.

“The whole region is going to see a much bigger reduction in absolute V.M.T.,” he stressed. “Manhattan will see a bigger proportional reduction.

“What the M.T.A. has done is hand live hand grenades to everyone who doesn’t like congestion pricing,” he said. “And the advocates are backed into a corner. Ultimately, the M.T.A. is carrying the water for advocates. … They are turning allies into skeptics,” he said.

As a result of the E.A.’s numbers, now advocates in the Bronx and transit advocates are saying, for example, that more must be done for the borough, like decking over the Cross Bronx Expressway, to offset the anticipated increased car trips, he noted. Komanoff says that’s a good plan, too, but shouldn’t be a roadblock to getting congestion pricing installed.

“All these things should be done, even if congestion pricing never existed,” he said.

If the M.T.A. now goes back and tweaks the numbers in its E.A., that wouldn’t look good either, he said, noting it will make people think the agency was just “cooking the books.”

So what happens now with congestion pricing, which was originally supposed to be implemented in 2021 but now is slated to go into effect next year? First, Komanoff said, it depends on who wins November’s election for governor, Kathy Hochul or Lee Zeldin. Hochul is committed to congestion pricing. Zeldin opposes it. Komanoff said Zeldin’s aversion to the toll isn’t simply because he lives on suburban Long Island.

“If she’s elected, it’s probably going to be able to go through,” he said. “But who knows how it could be changed in the legislation? It has to generate at least $1 billion a year in toll revenue. The Legislature could cut it down to half a billion. Everything is possible. Everything is political. … Maybe we’ll end up with congestion pricing but in a sadly reduced form.”

The tolling legislation was passed in 2019, yet the details remain up in the air. The appointees on the Transit Mobility Review Board still must assess the seven various toll-pricing scenarios and choose one.

Asked where the panel is currently in its process, Komanoff shrugged, “I don’t know that anybody knows.”

Komanoff has deep roots in the city’s biking scene and formerly headed up Transportation Alternatives, “reviving” the organization when it was in a down period in the 1980s. He met his wife at T.A. and they went on to have two sons together.

“I really care about things like having a livable city,” Komanoff said, “having transportatoin equity. You can’t find a place on earth that’s better for congestion pricing — it’s tailor-made. And if we can’t get it, it’s going to be a terrific loss. It’s going to be a blown opportunity. And it’s something that’s so relatively easy to do.”

Coming back to the Brooklyn Dodgers / congestion pricing analogy, Komanoff said, “They’re hanging on, really trying to get those final outs. But they have no relief pitchers left and everyone on the field is out of gas.”

When a reporter quipped, “No pun intended” after “gas,” Komanoff remained silent.