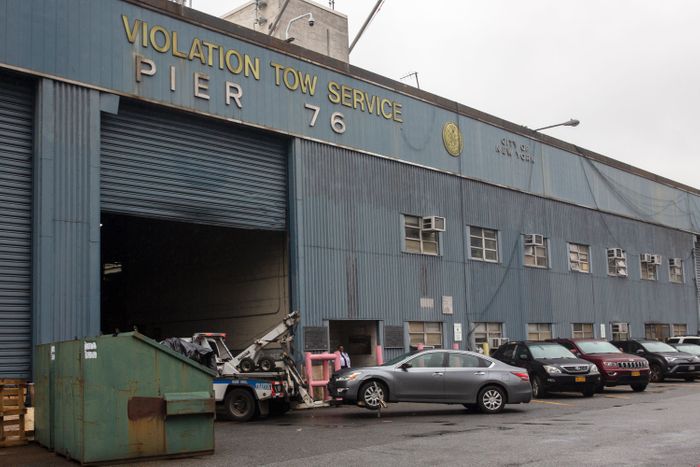 To expand Hudson River Park, tow pound may finally get hauled off the waterfront

Now, the N.Y.P.D. is working with City Hall to find a way to shut down the 230,200-square-foot structure and move its operations elsewhere to hand the pier over to Hudson River Park, city officials and the Police Department indicated.

“The N.Y.P.D. is currently exploring options to relocate the tow pound in order to make the area available for development,” said Sergeant Jessica McRorie, a department spokesperson.

The effort is part of a year-long study, pushed by Council Speaker Corey Johnson and conducted by Dattner Architects, on how to best use police impound lots across the city — including the West Side location, an evidence lot in Red Hook, Brooklyn, and a site in the South Bronx that is poised to become one of four new jails replacing Rikers Island.

The study began in February, and no final decisions have been made about the West Side site. But at an October presentation to Manhattan’s Community Board 4, city officials gave an outline of what they’re considering.

The tow pound, which currently takes in about 195 vehicles a day, may split into several smaller impound lots elsewhere in the borough, according to a copy of the presentation obtained by THE CITY. Automated parking-system technology may come into play, to stack cars and save space.

If and when it happens, the N.Y.P.D.’s departure would advance a plan 21 years in the making to incorporate the capacious pier into Hudson River Park. Still a work in progress, the park is developed and run by the Hudson River Park Trust, a partnership between the city and state.

A state law passed in 1998 to create the 4.5-mile-long green waterfront zone mandates the city to “use best efforts to relocate the tow pound on Pier 76” and directs the city to hand half the property over to the Trust as park space. It also requires the Trust to operate and maintain the entire park using funds raised within its borders “to the extent practicable.”

Six years ago this month, the state Legislature amended the law to require the city to hand over the entire pier to the Trust — and allow the other half to be used for moneymaking purposes that could include an entertainment production studio, restaurant, performance space, school or transportation.

As described in its 2020 financing plan, the Trust will seek proposals from private developers, after inspecting and analyzing the pier’s decades-old piles and working on a concept with the local community and elected officials.

A spokesperson for the Hudson River Park Trust said that the group currently has no plans for the site and that any potential project would take extensive planning and public input.

Recent cash-raising ventures by the Trust include the redevelopment of Pier 57 by RXR Realty, expected to bring in $220 million for the park, and the rehabilitation of Pier 40 via a real estate deal that put $100 million from a sale of its air rights in the coffers of The trust.

Construction is ongoing now on a new section of the park at Pier 55 created by billionaire Barry Diller, who will underwrite the $250 million price tag as “a gift to the city and the people of New York,” he said last year.

Hell on the Hudson

To Tom Fox, the steps toward new park land are long overdue.

Fox has been involved in planning on the West Side waterfront since the Westway plan crumbled in the mid-1980s and served as the first president of the now-defunct Hudson River Park Conservancy, formed in 1992. In his years of organizing to promote the waterfront park, the N.Y.P.D. has been, at best, reluctant to leave Pier 76 — and, at worst, downright obstinate, he said.

“They’ve had 20 years to get off the pier,” he said. “They’re tying up a valuable resource that’s critical to the financing of the park.”

The Manhattan Tow Pound at night is one NYC’s Circles of Hell. #thanksdeblasio

The tow pound has occupied the pier since 1977, when the waterfront was a very different place, home to “truckers and the homeless and salt piles, bus garages, sanitation facilities, a prison, concrete plants,” Fox said.

“Nobody wanted to be on the waterfront,” he said.

Nobody — including the many New Yorkers forced there to get back their towed cars. Over the years, accounts of misery have piled up.

In 1979, someone slashed the tires of 49 tow trucks at the pier, disrupting towing operations. In 1989, distraught motorists confronted tow truck drivers on the late-night “Disco Tow” shift. In 1991, an inside account of the pound detailed short tempers, bulletproof glass and one man who exposed himself to an attendant.

“The people that get towed, New Yorkers especially, have an extreme sense of victimization,” Transportation Department official Victor Rosen said at the time.

Razing the notorious spot is a no-brainer to Fox, particularly when it’s situated next to some of Manhattan’s most open space-deprived neighborhoods.

“How could you not build a public park on the waterfront to serve underserved populations?” he said.

Assemblymember Richard Gottfried cheered the movement on the pier, saying in a statement that removing the tow pound has “long been a priority for me” and that he has been pressing for it since the Hudson River Park Act was written.

“I look forward to the results of the city’s study so we can begin taking one of the final steps towards the completion of the park,” he said.

“The tow pound is an inconsistent use for the park and, once it is relocated, [the pier] will provide much needed open space for the people of New York,” he said in a statement.

Currently 72 percent of the Hudson River Park is complete, according to the Trust.

City Hall officials expect the author of the study of the tow pound and similar N.Y.P.D. lots to have initial recommendations to share by the end of this year.