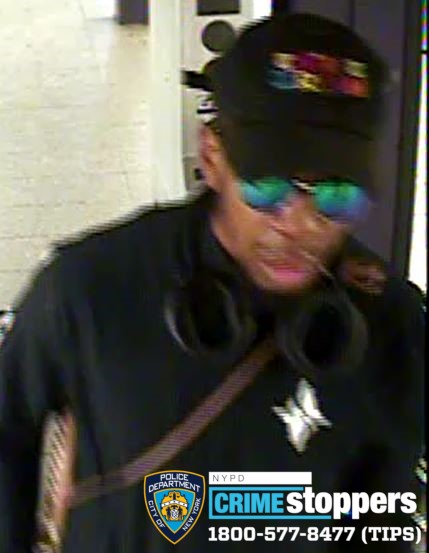 A surveillance-camera photo of the alleged attacker. (N.Y.P.D.)

BY KEITH J. KELLY | Police said they arrested the sword-wielding “ninja” who on Thursday morning clubbed a man on the head with the wooden sheath that housed a samuari sword at the Chambers St. subway station.

Selwyn Bernardez, 27, of Brooklyn, was arrested Friday afternoon shortly before 3 p.m. and the New York Police Department credited tips from the public for identifying him.

“Thanks to a tip from the community, the individual wanted for assaulting a man at the Chambers St. subway station Thursday morning has been arrested, Police Commissioner Keechant Sewell said.

Police had released photos and a video of the sword wielding suspect entering the subway on Thursday afternoon. Sewell added, “The @nycpolicefdn‘s support of the CrimeStoppers program continues to help fight crime across the city. Call #800577TIPS 24/7.”

In a bizarre twist, the New York Post reported Friday that the victim of the attack was Larry Griffin II, whom it previously dubbed the “bomber bozo” for his plot that planted rice cookers to resemble bombs in at least two instances discovered at the Fulton Street subway station back in 2019. The devices did not explode. Griffin pleaded guilty to falsely reporting explosive devices and in August 2020 was sentenced to two years in state prison and three years of supervised release.

Police said that prior to the attack, the assailant and victim had argued on the Uptown A train and had then both disembarked at the Chambers Street station. The argument turned physical when the attacker bashed the victim over the head with the wooden scabbard that housed the sword, causing a laceration to his head.

Police had not publicly confirmed the victim’s identity at the time of writing. But the Post in its Friday print edition ran a photo that it said showed Griffin with his head encased in bandages as he received medical attention.

The assailant was arrested at Lower Manhattan’s First Precinct, at Varick Street and Ericsson Place, and charged with assault and reckless endangerment, a police spokesperson said.