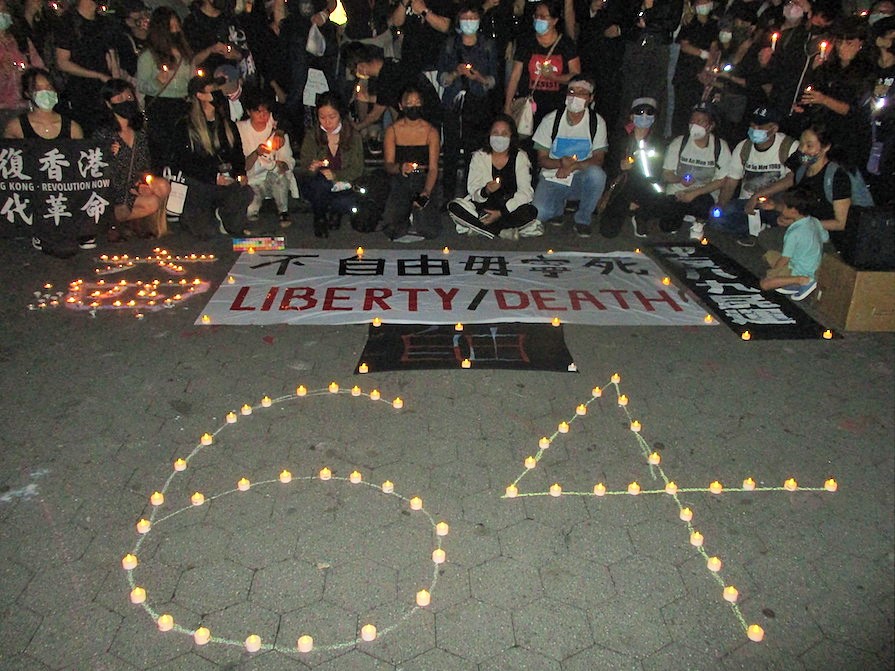 The numbers 6 and 4 signify June 4, the anniversary of the Tiananmen Square massacre. (Photo by Bill Weinberg)

BY BILL WEINBERG | The candlelight gathering of some 400 in Washington Square Park on June 4 was a sanctuary for a message now twice displaced.

Commemorations of the 1989 massacre of hundreds (perhaps thousands) of peaceful pro-democracy demonstrators in Beijing’s Tiananmen Square have long been prohibited in mainland China. This year, they were also prohibited in Hong Kong, where they have traditionally drawn huge crowds.

The local groups NY4HK and Lion Rock Cafe (named for the iconic mountaintop crag overlooking Hong Kong) teamed up for the remembrance in the heart of Greenwich Village.

Joyce Ho of Project Black Mask HK, a new group formed to support the protest movement in Hong Kong amid the current harsh crackdown, said in her opening remarks, “We are here to commemorate for those who no longer can. We have to carry spirit of Hong Kong and commemorate the deaths in Tiananmen Square here in New York.”

She reminded the group that Hong Kong authorities had imposed a five-year prison term for attending the commemoration normally held in the city’s Victoria Park, and a one-year term just for promoting it.

Sharon Hom, director of the group Human Rights in China and an adjunct professor at New York University School of Law, herself a Hong Kong native, also noted sadly that it was necessary to hold the commemoration “8,000 miles from our beloved city.”

Hom read poignant words from a new statement by the group Tiananmen Mothers, made up of women who lost their sons and daughters in the massacre and are demanding accountability from China’s government: “Our group lost two more mothers to illness in 2020. However, our faith and perseverance will continue.”

But Hom noted that even amid the current repression, Hong Kongers are resisting the “authoritarian tactics of forced amnesia.” She said that there is “graffiti all over Hong Kong” commemorating the massacre, which is rendered in China by the shorthand “6-4” (for June 4).

Also among the speakers were two actual veterans of the 1989 pro-democracy movement in China. One was Lu Jinghua, a founder of the Beijing Workers’ Autonomous Federation, an independent labor union that emerged in solidarity with the student protesters camping in Tiananmen Square. Lu had to flee China in the wave of repression following the massacre, and today has asylum in the U.S. She led the crowd in chants of “Democracy in China! Freedom in China!”

The other Tiananmen veteran was Chen Pokong, who led pro-democracy protests in Guangzhou, where he was then a student, during the 1989 movement. After the movement was repressed, he served years in prison and at hard labor. He went into exile in the U.S. after his release.

Addressing the current atmosphere of anti-Asian xenophobia in the United States, Chen emphasized that the enemy is the ruling Chinese Communist Party.

A veteran of a more recent protest movement was Alex Chow, who was a leader of the 2014 “Umbrella Revolution” in Hong Kong, and is now doing post-graduate work in geography at the University of California-Berkeley. He addressed the crowd in his native Cantonese tongue.

A small musical ensemble performed songs associated with the Tiananmen movement, including “Blood is on the Square,” written after the massacre by the American folk singer Phillip Morgan.

It was Sharon Hom who summed up the spirit of determination in the face of Beijing’s new wave of repression. She quoted what she said was an old Chinese folk saying: “You can kill all the roosters that herald the dawn, but you can’t stop the dawn.”