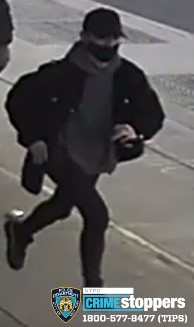 A surveillance photo of the young attacker fleeing after hitting the unsuspecting senior woman, according to police. (Courtesy N.Y.P.D.)

Punk hits woman, 68, in the head in Village

Police said a 68-year-old woman strolling in the Village on a weekend afternoon was randomly punched in the head.

According to cops, on Sun., March 7, the victim was walking down the street at Seventh Ave. and W. 13th St. around 4:50 p.m., when she was approached by an unknown man, roughly in his 20s, who hit her in the head. No words were exchanged.

The woman suffered pain and bruising but refused medical attention at the scene.

Police released a surveillance photo and video of the suspect — showing the cowardly attacker running away — taken nearby after the incident.