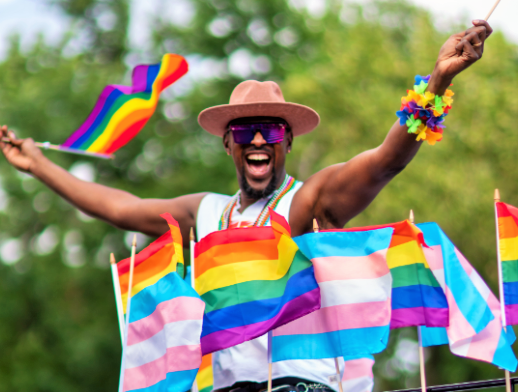 There will be a total of three Pride marches this weekend — two of them in person, one virtual — with one concluding in Washington Square Park and the other dispersing there.

Gay City News reported that Heritage of Pride (HOP), the Reclaim Pride Coalition and the NYC Dyke March all have weekend events planned to mark the end of Pride month.

The NYC Dyke March will be held Sat., June 26. Stepping off from Bryant Park in Midtown at 5 p.m., it will head south along Fifth Ave., winding up at Washington Square Park. “Black Dyke Power” is the theme of this year’s march.

Meanwhile, the Reclaim Pride Coalition’s Queer Liberation March will be on Sun., June 27. It, too, will gather at Bryant Park. Departing at 3 p.m., the procession will head down Seventh Ave. to Sheridan Square. The march had also been slated to end with a rally at Washington Square Park, but “the rally has been scrapped,” according to Gay City News. Instead the “march dispersal” will be at “Sheridan Square/Wash Sq Pk,” according to the group’s Web site.

The Queer Liberation March and the Dyke March are held without permits and have no corporate sponsors.

Also on Sunday, HOP will air a virtual march on ABC-7 from noon to 3 p.m. After that, people can tune in to HOP’s YouTube and Facebook channels to enjoy virtual programming with the event’s grand marshals, including actor Wilson Cruz of “Star Trek: Discovery” and “Noah’s Arc”; Ceyenne Doroshow, a performer and founder of GLITS, an L.G.B.T.Q. grassroots organization; Menaka Guruswamy, a senior advocate at the Supreme Court of India; attorney Arundhati Katju; Demetre Daskalakis, the director of the Centers for Disease Control and Prevention’s Division of H.I.V./AIDS Prevention; and Aaron Rose Philip, a model who has scored major fashion campaigns with Moschino, Sephora, Marc Jacobs and Calvin Klein.

HOP also will hold an in-person PrideFest, an L.G.B.T.Q. street fair, on Sun., June 27, from 11 a.m. to 6 p.m., on Fourth Ave. between Ninth and 13th Sts. Deejays Coco and Breezy, Papi Juice and artist Stass THEE Boss will perform.

Later Sunday evening, there will be a socially distanced “watch party” at Pier 17 at the South Street Seaport, featuring performances by drag queen Nicky Doll and DJ Joe Gauthreaux.