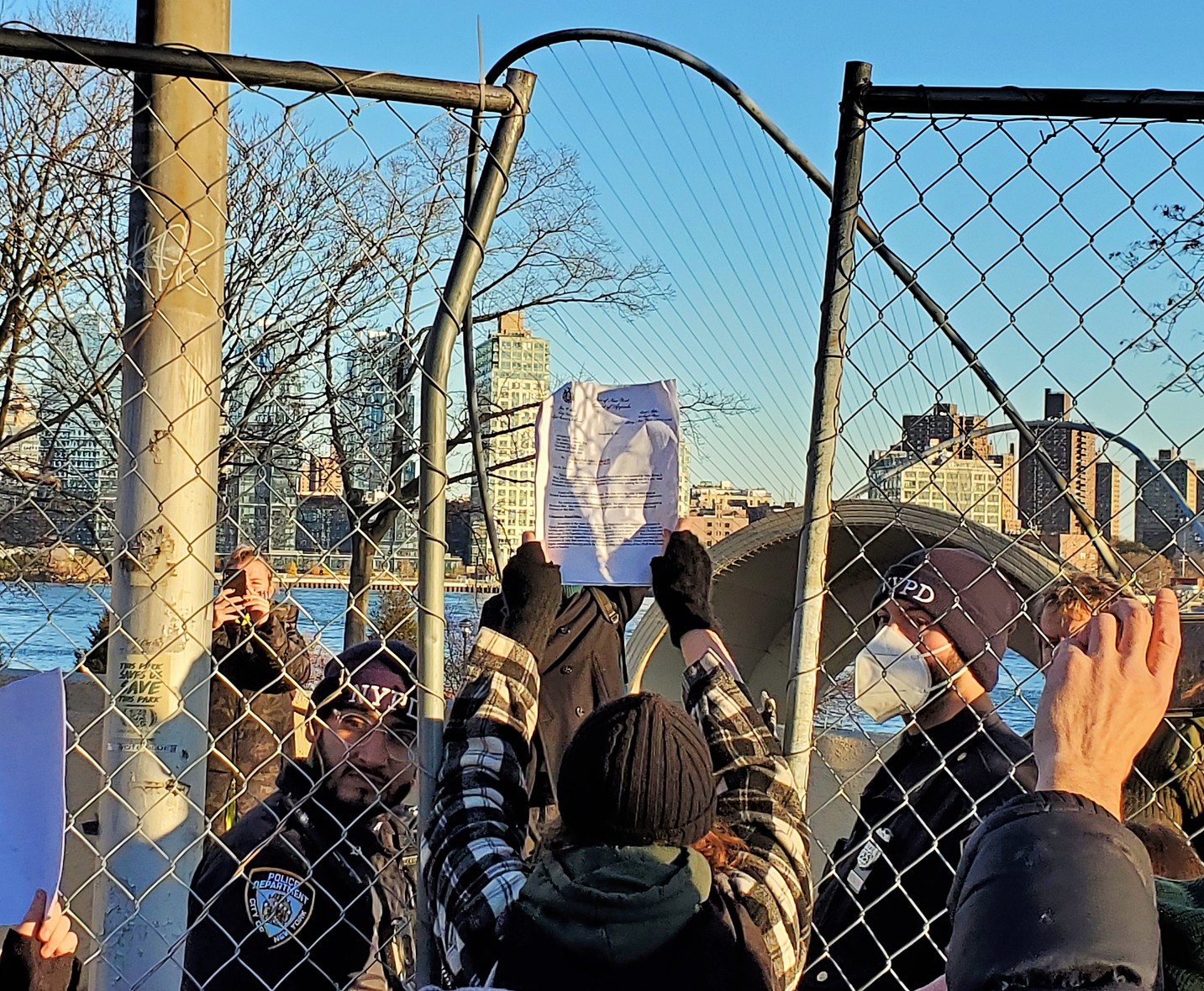 Sarah Wellington holds up a copy of the T.R.O. outside the gate at the East River Park amphitheater during Sunday's protest. (Photo by The Village Sun)

BY LINCOLN ANDERSON | It was more chop around the clock in East River Park on Sunday as workers stayed in overdrive mode, intent on wreaking as much destruction as possible over the weekend before Monday morning’s crucial court hearing.

And there were more arrests, too, among the resiliency resistance. Three park defenders were cuffed at the amphitheater after slipping in behind the construction fence there.

Police had initially just let the trio of activists hang out inside the fenced-off area as the protest wore on. But, at one point, cops zip-tied the gate’s doors together more tightly, to keep others from getting in, and things briefly flared up. Officers shook the gate to get the protesters to back off. In response, the crowd erupted, chanting “Shame! Shame! Shame!” as one of them repeatedly tried to serve the police with a restraining order to block the park work.

“Are you ready for the burnout?” a woman on a bullhorn blared at the police. “Because crime rates are gonna blow up on the Lower East Side [if the park is closed].”

A “construction bulletin” for the East Side Coastal Resiliency project says the daily work hours are supposed to be from 7 a.m. to 3:30 p.m. But par for the course for the de Blasio administration, public statements did not match reality, and work in the fenced-off section of the park went on 24/7 on both Saturday and Sunday.

Attorneys for the project’s opponents will be in court Monday at 8:30 a.m., desperately trying to stop the work. They argue that a previously issued temporary restraining order (T.R.O.) from an earlier court decision in the plaintiffs’ case should apply and should be preventing the current destruction. They’ll also be bringing a motion against the city for contempt of court.

Sunday more trees were chopped down. All of the ones — at least 50 years old, by park activists’ estimates — that ringed the dance oval / labyrinth north of the Brian Watkins Tennis Center have been totally cut down. Viewed from the west across the F.D.R. Drive on Sunday afternoon, where the stately London plane and locust trees had once stood, all that could be seen was a pile of freshly cut giant tree trunk segments.

In addition, workers were tearing up the riverfront esplanade near Grand Street late into Sunday night.

Rev Billy: “We are ALL feeling we did not do enough.” vowing to take the ENVIRONMENTAL FIGHT “To the TOMBS” ( #NYC #Jail ) to save East River Park TREES #saveEastRiverPark https://t.co/N3gR93SlGS via @YouTube @AllieRyanNYC @ChrisMarteNYC @1000treesNYC @ERPAction @TheVillageSun

Earlier that afternoon, park defenders held a gathering at Stanton Street in the park, where construction workers just added a second fence north of the first for an extra layer of protection. On Dec. 6, workers closed off the southern part of the park at this spot for the E.S.C.R. project’s phase one.

Among the speakers were Reverend Billy, the environmentalist performance-artist preacher, and Christopher Marte, the incoming Lower Manhattan city councilmember.

Using several electric bullhorns that were in the crowd, speakers blasted the city for destroying the park — and the police, too, for defending the workers as they are doing it.

“The destruction of the park is completely connected to the destruction of people of color in this country — I’m telling the truth!” shouted Katherine De La Cruz, a young Brooklyn activist.

Noting the surrounding area has many Hispanic residents, she said, “I’m Dominican. Dominicans love baseball. Dominican kids play a lot of baseball. Kids need outlets, emotional and physical. There are a lot of issues at stake here.”

“They are attacking the neighborhood of Black and brown people because they think we can’t fight back. We are fighting back,” she declared.

She seethed at the mayor’s audacity to have the workers demolish the park despite the existence of a T.R.O. that the opponents say is still good.

Referring to the deforested dance circle, Reynolds said, “You see that sick circle? It’s sick. Mayor de Blasio is the mayor for the people? He’s showing his true colors on the way out the door.”

“I’ve known these trees my whole life!” she said. “These trees are my friends — and we’re not going to let them die!”

Virginia Ryan, her pal, said, “These trees are 50, 60, 70 years old. They’re like parents and grandparents. We grew up in this park and we will not let it die!”