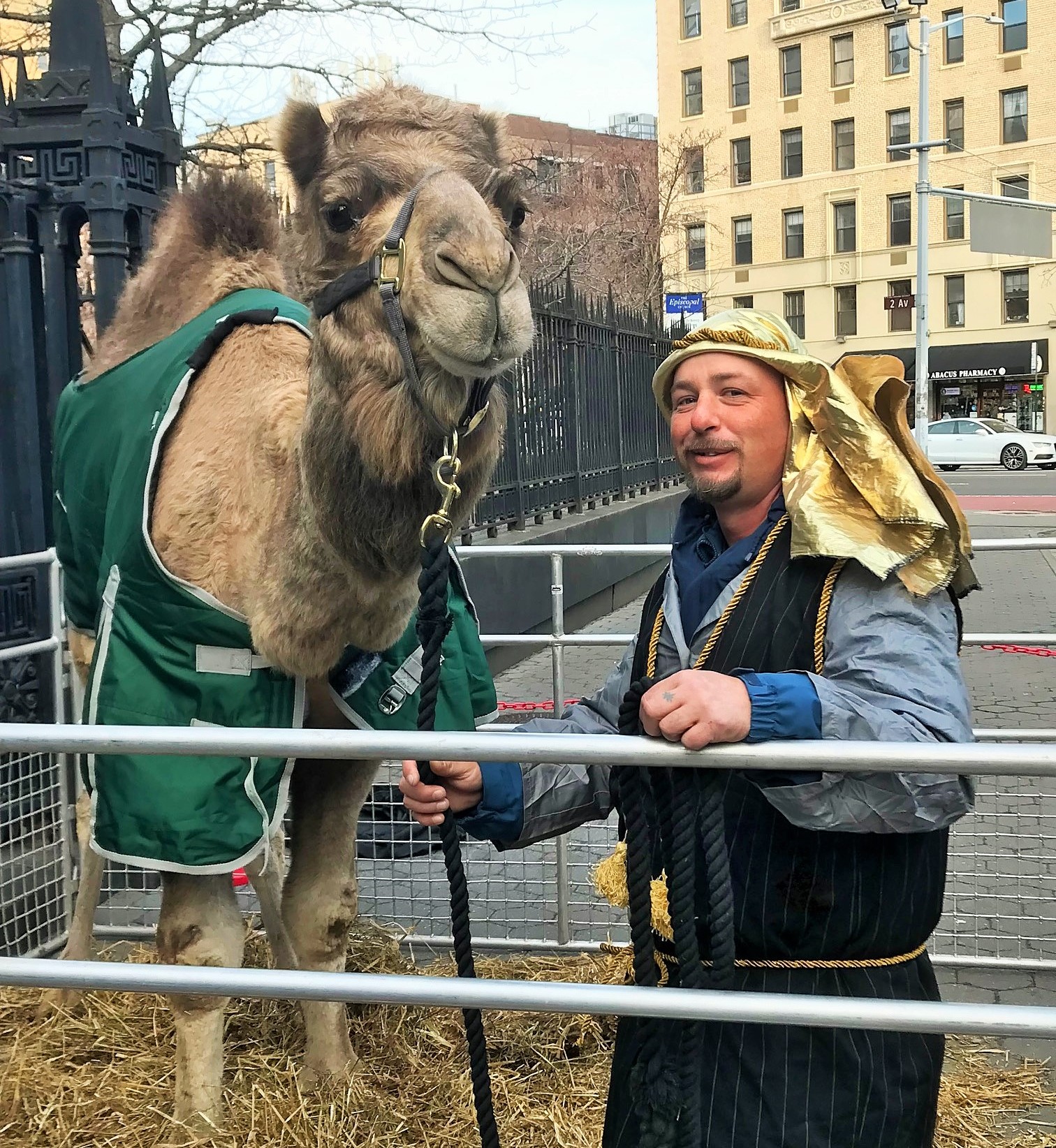 Chesney, the dromedary, and handler hanging out in front of St. Mark’s Church. (Photo by Bonnie Rosenstock)

BY BONNIE ROSENSTOCK | Three Kings Day (Los Reyes Magos), Jan. 6, is celebrated throughout the Spanish-speaking world to mark the birth of Jesus, and in the Puerto Rican Loisaida community, it was commemorated in style. There were drums to herald in the occasion, an original play with song and dance that depicted the biblical event, homemade cupcakes, gifts for children and adults alike, and, a first for the community, a very large camel.

Beginning at 3 p.m. at Haven Plaza, E. 11th Street and Avenue C, the driving rhythmic drumbeats of Fogo Azul (Blue Fire), the all-women Brazilian drumline marching band, wended its way west to St. Mark’s Church in the Bowery on 10th Street and Second Avenue. There a docile dromedary by the name of Chesney, from Green Horse Farm in Pennsylvania, took center stage in front of the church to delight the gathering onlookers.

As the lively crowd conversed and milled around, succulent cupcakes, courtesy of the Puerto Rican-owned Harley Cakes, and hand-carved tres reyes figurines, crafted by Dina Leor of La Sirena, a Mexican folk art store, both local small businesses, were offered.

Because of the pandemic, “Gifts of the Magi,” scheduled to be performed inside the church, was canceled (all cast members were required to take rapid tests). So the invited children from the Henry Street Settlement were ushered into St. Mark’s West Garden for the annual gift-giving party. Later that afternoon, the cast performed the play for videotaping with no audience. This reporter was an invited guest.

“Gifts of the Magi,” celebrating its 10th anniversary, has special meaning for playwright/director Maria Angie Hernández. It started out as a five-minute skit to accompany the gift-giving to local children, at the behest of Carlos “Chino” García, co-founder of CHARAS/El Bohio. Hernández was part of that cultural organization for many years. It was presented at St. Mark’s Church for nine years, the last time in 2009. Now it runs about 45 minutes.

“Not only did it grow in time, but also in music, dance and theater,” explained Hernández.

For Hernández, this year especially is a labor of love.

“I am struggling with cancer, dealing with chemo, which is worse than the cancer itself, but it could be worse. If I slow down, it slows me down,” she said.

Most of the play’s dialogue is in English, interspersed with Spanish translation and phrases and infused with Puerto Rican humor, “the spirit of Puerto Rico,” she said.

“We grew up singing and acting,” he said. “We have it in our blood. Everyone in our family has a particular talent. We did it virtually last year as a surprise for Angie. Her granddaughter Esme was the Star.”

Hernández’s daughter Martha Badillo grew up and into doing the role of Mary, Jesus’s mother.

“Every year I look forward to doing it,” she said. “Mother enlisted all the family into roles. My son, 37, plays an angel.”

Hernández was living in Puerto Rico when the devastating Hurricane Maria hit in 2017.

“It brought me back to New York City,” she said. “When I left Puerto Rico, I took a few barrels of costumes that I took there and had someone bring them back to New York.”

Laura Texter, a local costume designer, added a lot of trim and details. She has her own small costume business, Yesterday Night, and St. Marks Masks, which she created during the pandemic to sell masks.

“This time around, it has been wonderful,” Hernández said. “I have never had such a great experience. Being able to do this, that counts a lot for me.”