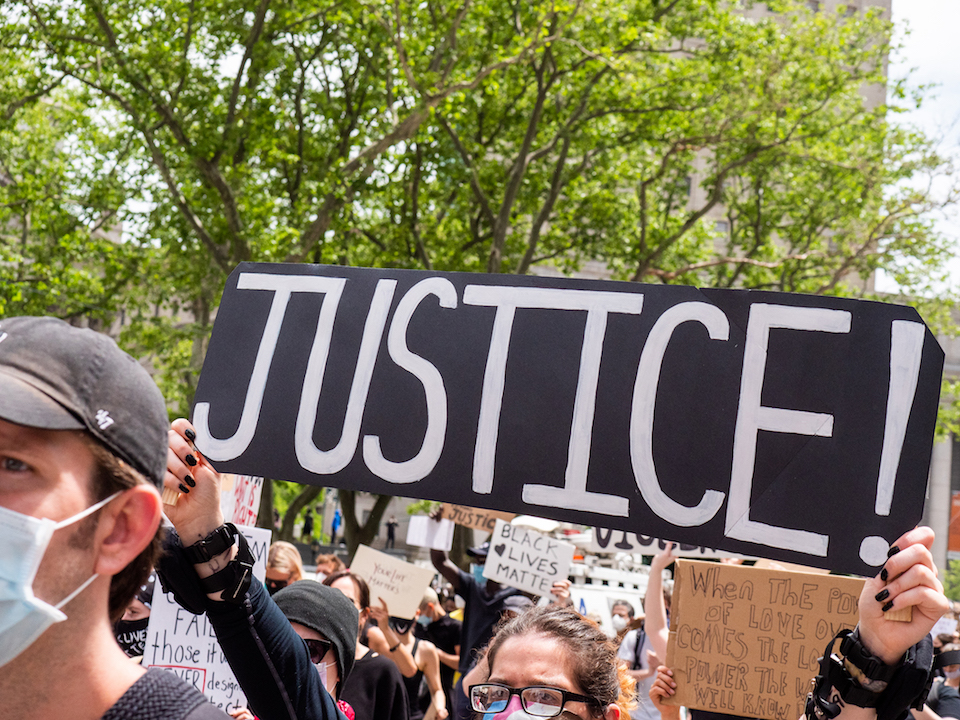 At a George Floyd protest in June. (Photo by Milo Hess)

They stole us; They sold us; They owe us: Black reparations now!

BY FRANK MORALES | This past Sat., Aug. 15,  supporters of the movement for Black reparations gathered at Columbus Circle in the shadow of Trump Tower.

Numbering about 100, many wearing white T-shirts and caps adorned with an “X” in honor of Malcolm X, they chanted, “They stole us! They sold us! They owe us!” and echoed various statements issued by rally sponsors the December 12th Movement a.k.a. D12.

The date chosen is meant to commemorate the first National Reparations Conference in the United States, held in Washington, D.C., in August 2002. The U.S. event was sparked by the 2001 World Conference Against Racism held in Durban, South Africa, which declared, according to a D12 flier, “the Transatlantic Slave Trade and Slavery a Crime Against Humanity with no statute of limitations. A crime that stole the labor of our Black ancestors through forced brutality and mental and physical terror in order to build the wealth of America.”

According to D12 Movement organizers, “Reparations is the issue that ties together all the threads of oppression and resistance we see today: structural racism, police terror, state failure to protect from COVID and to take into account slavery-bequeathed health problems of Black folks, lack of wealth, employment, proper healthcare, poor housing, environmentally unhealthy communities, and denial of education for the 21st century.”

The movement’s aim is to “tie solutions of the particular manifestation of oppression we are dealing with to the demand for reparations.”

Organizers said they chose Trump Tower at Columbus Circle for the action “because he is the president of the U.S. and the U.S. government must provide reparations. We are at Columbus Circle because Columbus initiated the criminal enterprise of white supremacist-guided genocide, enslavement and exploitation, of which Trump is the current chief spokesman.”

During the course of the rally, held directly across the street from Trump Tower, in full view of a bevy of police in vehicles and interested onlookers, a number of Black activists and educators spoke, offering their own particular insights and perspectives on the critical importance of the drive for Black reparations in America. They all generally affirmed the basic claim that reparations is a matter of simple justice.

As a longtime collaborator with D12, I was also asked to speak, and given my interest in housing issues, offered the following: “So how ’bout this? How about reparations in the form of a free home for every Black man, woman and child in America! Right now! That’s right! No rent, no mortgage payments, straight-out ownership of your home. Hand over the deed!”

Further on, I also stated, “There needs to be reparations for homeless folks in the form of a home, with healthcare rehabilitation built in, for a people whose life expectancy is 20 years less than you and I. Did you know that a homeless person lives 20 years less than the rest of us?

“Reparations means to repair the hurt,” I continued, “to repair the violation, to repay the debt garnered through centuries of violence, from the sick sadism and obscene violence of slavery, to the racialized counterinsurgency against the Black community in modern times.

But I added that to repair such a profound wrong “will most certainly necessitate such an extensive and systemic reworking of this racist American society, that it would be tantamount to a revolution in America.”

In conversations with many of those in attendance and previously with activists involved in the wider Black Lives Matter movement, my sense is that the movement for reparations hovers between two poles: On the one hand, some hold a generalized and possibly revolutionary vision that anticipates the profound implications of full Black reparations. On the other hand, others assert that a more immediate and practical set of objectives, meant to remediate the more immediate violations and needs of the Black community, is called for.

Regardless of where one comes down on the continuum of transactional versus transformational demands, it is clear that given the ongoing BLM mobilizations, that the call for Black reparations has surely arrived.

But D12 organizers stressed that the call for Black reparations is “a demand only made real if You stay down with the work! So keep in touch with us at www.d12m.com  718-398-1766 and make 2021 the National Year for Reparations.”