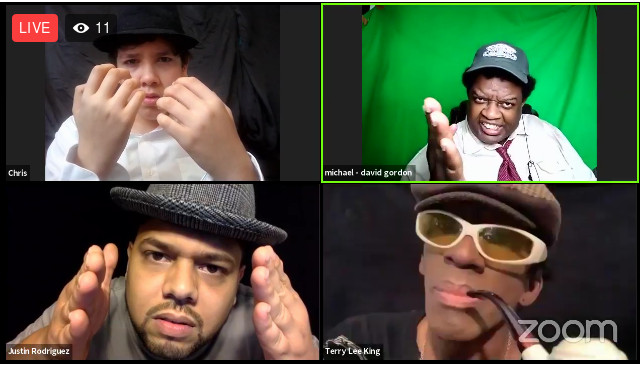 Clockwise, from top right, Michael-David Gordon, Terry Lee King, Justin Rodriguez and Chris are among the performers in "Liberty or Just Us, A City Parks Story." (Courtesy TNC)

In the time of COVID, Theater for the New City is bringing you street theater like you’ve never seen it before — namely, on your screen.

Due to coronavirus, the city has refused, at least so far, to give the East Village theater permission to perform its traditional summer outdoor show in the city parks. So, the theater is doing it via Zoom instead.

The theater’s 2020 piece is “Liberty or Just Us, A City Parks Story,” an oratorio written and directed by Crystal Field, TNC’s artistic director and founder, and composed by Joseph Vernon Banks.

Field said the theater applied to put on the piece in the parking lane outside the theater but was told by the city that neighboring restaurants were already using all the allowable space for their outdoor service.

The show is designed to be performed both outdoors and virtually, though right now is only virtual. It honors New York City parks for being refuges of activism for many 20th- and 21st-century progressive causes, from the Triangle Shirtwaist Fire protests to Occupy Wall Street. The piece revisits these movements through the eyes of a contemporary park manager in songs featuring him and the multiethnic, multi-abled ensemble.

TNC Street Theater is a 43-year tradition of performing outside in city streets, parks and playgrounds.

Each showing is performed live only, with the performers “zooming” in from their residences, to create the feeling of performing outside and holding a large, non-captive audience. If pandemic regulations change, the production will shift to live outdoor performances on the same schedule, with social distancing and occupancy limits strictly enforced.

TNC’s Street Theater productions are always a bouncy joyride through the undulations of the body politic, with astute commentary couched in satire and song. They are suited for family entertainment, since complex social issues are often presented through children’s allegories, with kids and neighborhood people as the heroes.

In a typical year, the production arrives on a truck and is mounted on an elevated proscenium with trapdoors, giant puppets, smoke machines and a huge, 9-foot-by-12-foot running screen or “cranky” providing continuous moving scenery behind the actors. Music varies in style from bossa nova to hip hop to musical comedy to classical cantata. Seating is laid out with milk crates and a crowd is summoned by playing recorded jazzy, peppy music before the show starts.

Later in the run, if city and state regulations permit outdoor performances, social distancing will be achieved by spreading the milk crates out for individuals and couples and marking areas where three to four family members can sit together. The cast of 20 will be staged far apart on three separate platforms, each with multiple stair units. Actors and crew will don gloves and masks as necessary. Disposable song sheets will be passed out to the audience for sing-alongs and attendees may even be asked to provide harmonies. Instead of the “cranky,” there will be a painted banner behind the center platform.

To accommodate the need for simplicity, author/director Field and composer Banks have adopted the form of an oratorio this year. The restrictions of technology are taken into account and the music is accordingly simple. Since live Zoom requires presenters to take stage sequentially, there’s no way for the ensemble to sing together, so songs are divided up verse by verse. Classic folk songs are also used, notably “This Train Is Bound for Glory,” by Woodie Guthrie. Accompaniment is by a solo keyboardist and two guitars.

The playing schedule is Saturdays and Sundays starting at 2 p.m. Each free performance pays tribute to the park, playground or neighborhood street it was originally scheduled for. The shows started on Aug. 8. Upcoming shows include:

The show will not change from performance to performance, but each time a different park will be highlighted.

Field told The Village Sun she’s extremely concerned about the fate of small theaters, like her own, if they are not allowed to reopen at least somewhat this fall. Broadway theaters have a lot of money behind them, but that’s not the case for smaller venues, she noted. She said she’s even willing to put on indoor shows for as few as 10 people, if that’s the maximum allowable audience.

Not surprisingly, not much has been going on inside TNC lately. Performers recently were at least going inside to get their costumes — but there was no hugging due to the pandemic.

To watch “Liberty or Just Us, A City Parks Story,” visit the Theater for the New City Web site at 2 p.m. on the above dates.