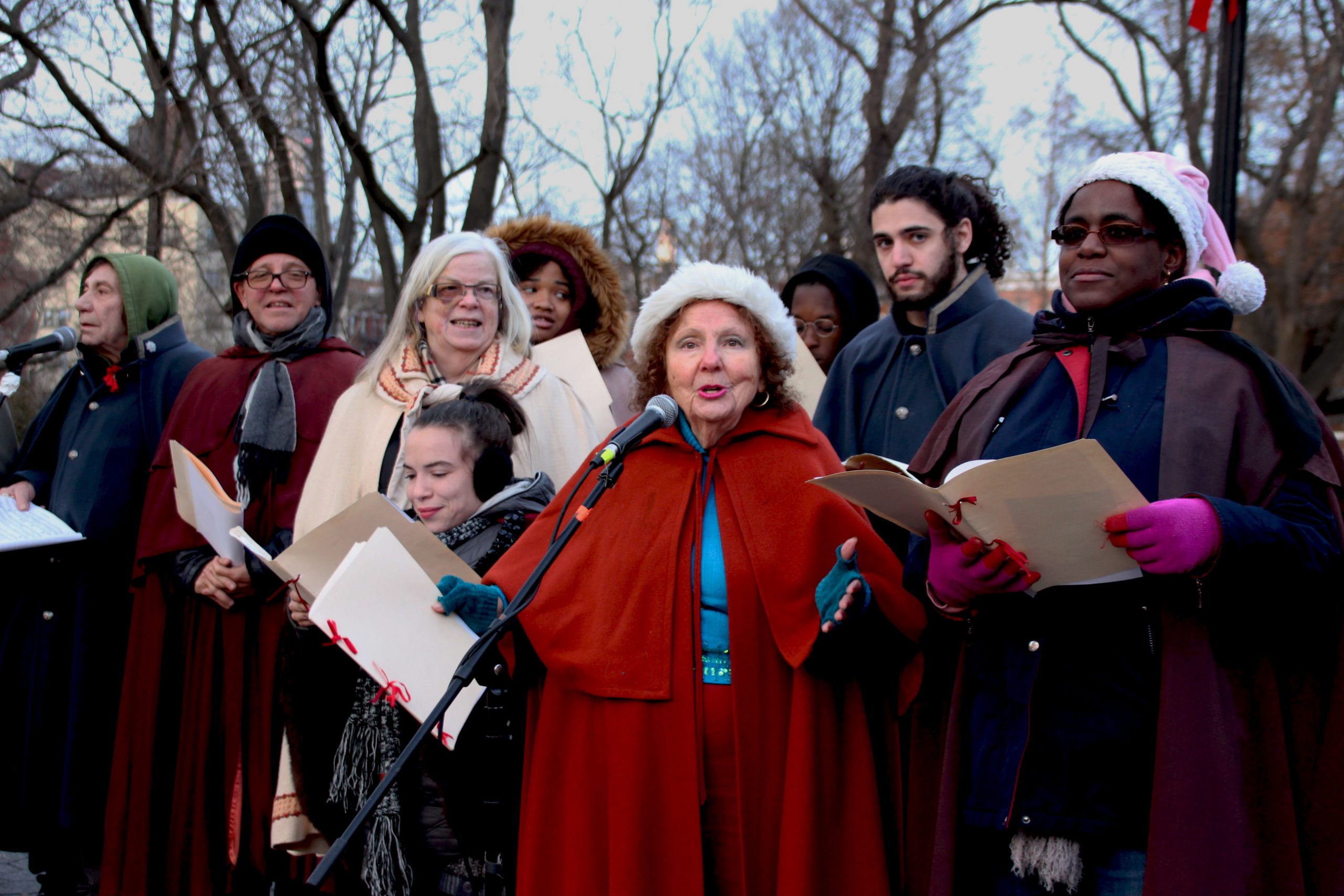 BY BRIANA BARTENIEFF | Between the city’s holiday markets and the frothing mouths of consumers, the Christmas spirit can become buried somewhere between a Forever 21 bag and an ugly Christmas sweater your aunt bought you a year ago.

But the Christmas spirit can be found not by following the great star in the sky, but by the sweet steam that wafts off of Veselka’s hot chocolate and the holly jolly notes from Theater for the New City’s Christmas Choir that spread out around Tompkins Square Park for its annual tree-lighting ceremony.

It’s the 28th year the East Village and Lower East Side community has come together for the event. More than 300 people came — from all the way over by the East River, from the busy (yet carless) 14th St. and from elsewhere around the neighborhood — to see the celebration that marks the beginning of the Christmas season for many.

Just like the joy that marks this time of year, the event is for everyone. Tiny tots in their parents arms sing along to the holiday classics with smiles on their faces, beaming ear to ear, while Jack Frost nips at their nose.

The choir from Theater for the New City, at 155 First Ave., between Ninth and 10th Sts., has sung at the celebration for 28 years, accompanied by the lovely Mandel Lyden Trio, as always. Among the 20-member choir’s repertoire are such favorites as “Rudolph the Red-nosed Reindeer,” “Feliz Navidad” and “Don’t Let the Lights Go Out,” a Hanukkah song.

But arguably one of the event’s best moments is when Crystal Field, the artistic director of Theater for the New City, recites “The Night Before Christmas” to the crowd.

The energy that bounced off the trees from the audience was something that could only be created in that particular moment. Looks of amazement and joy filled the faces of everyone listening as Field’s voice got more passionate with every word, until ending the story with the famous line, “Merry Christmas to all, and to all a good night!”

Everyone cheered with a great roar. I even found myself cheering passionately because, even though the poem took four minutes to recite, every word was just right. You almost felt as if you could hear the sound of Santa’s reindeer walking nearby.

After the Christmas caroling, it was time to light the tree. City Councilmember Carlina Rivera, who represents the Second District, briefly spoke.

“There have been challenges, but we are a family of neighbors,” she said.

She then helped everyone count down from 10, and just like that, with one click of a button, the tree was lit.

Community activist Albert Fabozzi started this event 28 years ago for the community.

Alison Patrick called out the number “69” and a youthful cry came from the back, “That’s me! That’s me”

A child who couldn’t have been more than 6 years old ran up and gleefully grabbed the ticket and walked back to his mother as everyone watched affectionately.

After wishing everyone a happy holiday and some goodbyes the event was over. People started walking off, with the tree’s soft light fading behind them.

This event may last for only a few hours, on just one day of the year, but the emotions and sense of “family” sense of community that it creates has made it a tradition of 28 years, with many more to go.