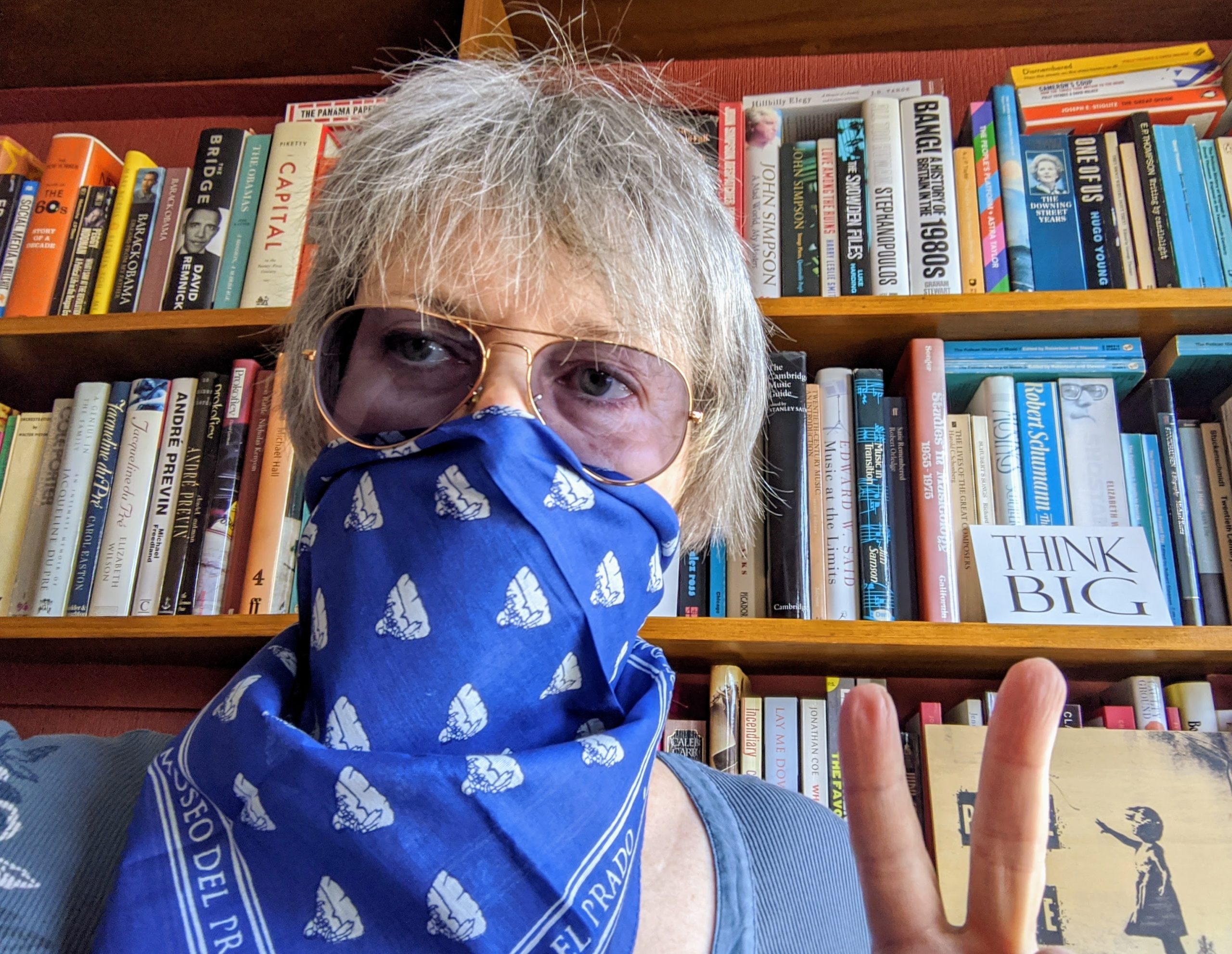 The view from London

BY LIZ THOMSON | I’ve always felt that Britain’s voting for Brexit contributed in some way to the election of Donald Trump, so let me begin with an apology.

Yet, while I’d always felt with horrible certainty that, were it put to a vote, the UK would leave the EU, I never imagined America — a puritanical country in so many ways — would vote for a tax-fiddling philanderer and failed businessman. I was in New York when Trump made his declaration speech. Success seemed inconceivable.

So it is our shared misfortune that we in Britain and you in America find ourselves at this perilous and frightening time governed by dangerous and self-serving ideologues whose narcissism, desire for power and general corruption have rendered us incapable of mounting a credible response to the coronavirus. Trump has dismantled the health security operations set up by Obama and even at this moment of crisis pursues personal vendettas.

The Conservatives came to office in the UK in 2010 determined to roll back the state. Under cover of supposedly necessary post-crash austerity, they slashed the budget for the National Health Service (NHS), the cradle-to-grave healthcare-for-all system set up in 1948 by the Labour government and paid for by a hypothecated tax. They slashed the budget for public health education, for social and elder care; and they decimated welfare, branding all those reliant on it feckless and work-shy, thus pushing some 5 million children into poverty even before the corona crisis. They fought a war with doctors and nurses over hours and pay — more of the former for less of the latter.

This past weekend it emerged that in 2016 there was a three-day dry run for a pandemic eerily similar to coronavirus. Professor Sir Ian Boyd, Britain’s then-chief scientific adviser, warned then-Prime Minister Theresa May that Britain would be overwhelmed, having insufficient critical-care beds, personal protective equipment (PPE) and mortuary capacity. The report was discussed and then shelved: too costly. Besides, May was busy with Brexit. A request a year later that there be sufficient eye protection available to all healthcare professionals was similarly dismissed.

So here we are, in the eye of a perfect storm: a pandemic we seem powerless to stop, with too few hospitals, and too few medics and caregivers. All are now expected to go into battle with inadequate kit. Britain loves war metaphors — the blitz spirit, the Dunkirk spirit — but the metaphor that applies comes from World War One: We are sending our doctors and nurses “over the top” equipped with what my neighbor, a hospital doctor, describes as “a doctors and nurses kit” of the sort we played with as children. “I’m quite scared,” she whispered, glad that her children thought coronavirus dangerous only for older folk.

Like Trump, Boris Johnson took no notice of COVID-19 till it arrived on our shores — perhaps brought in by Chinese returning to Britain after the Lunar New Year, perhaps by British families who’d spent half-term breaks skiing in Northern Italy.

When I returned from New York on Feb. 27, processing through London Heathrow, no one was checked. Nor were there any public health notices that might have prompted anyone feeling unwell to consider their symptoms. We’ve now been in lockdown for a week, yet during that time, friends returning from Australia also passed through unchecked; so too cousins back from holiday in Jamaica. You have to wonder.

It was soon clear to everyone — everyone but the government — that we were heading for trouble, yet there was no attempt to cancel concerts, ball games or the Crufts Dog Show. An exhibition center with 160,000 attendees is a Petri dish of infection at the best of times, and the Midlands area around it now has notably high levels of sickness. One must assume that, to coin a phrase, it was “the economy, stupid.”

The first coronavirus-specific summit took place as late as March 9. Three days later, Prime Minister Johnson, flanked by two uncomfortable-looking health experts, told the nation that the goal was “herd immunity” — that is, around 60 percent of the population, some 40 million people, becoming infected in order that there be sufficient tolerance to stop coronavirus circulating. That way, Johnson said, Britain would “squash the sombrero.” The approach would result in around 260,000 deaths.

Criticism rained down from the world’s scientists. The nation felt uneasy about a giant chicken pox party. So a few days later it was all about “social distancing,” advice given to stay out of pubs, restaurants, theaters — though the government saw no need to order them closed.

On March 18, my local indie pharmacist set up a volunteer group of people able to deliver provisions to the vulnerable and the over-70s who would, he predicted, be told to “self-isolate” before the week ended. That instruction took a further six days.

It was delivered in a rare primetime TV broadcast, Johnson scripted and speaking from Downing St. By that time, a public spooked by grim footage from northern Italy had stripped bare supermarket shelves and were for the most part staying home, so bars and restaurants decided they might as well close.

Now the prime minister ordered a shutdown of all but “essential” services and asked everyone who could to work from home. But it wasn’t clear what was “essential,” which meant the reduced-service subway trains resembled sardine cans, packed with contract and casual workers who get paid only if they show up. Government plans to support business and employees was trickled out. Provision for freelancers and the 5 million in the gig economy came last.

The Conservatives’ determined dismantling of the post-war settlement — their decade-long “austerity” program that led to Brexit, playing into the hands of the rich and big business, with its desire for a “bonfire of red tape” — has left millions struggling to survive. Including, shamefully, the doctors and nurses on whom we are now utterly dependent.

The sell-off of public housing, begun by Margaret Thatcher in the 1980s, has continued and came to include Housing Association projects. Across the country, the rental market is now overwhelmingly in private hands and, unlike in New York, there are no controls and certainly no grandfathered rents. Lack of regulation has resulted in shocking abuses — and the squeeze on local councils means they can’t afford inspectors to police transgressions, including food standards. Nor is the so-called National Living wage of £8.21 per hour (£7.70 for under-25s) properly policed.

I live in Muswell Hill, an urban village perched high above the city. It is green, family-oriented, left-leaning, art-farty (not for nothing is it nicknamed Muesli Hill) and determinedly anti-Brexit. It’s not Greenwich Village but it is a community, with good schools, local shops alongside supermarkets, a cinema, music-making…a good place to live.

I moved in 22 years ago having grown up five miles away. Home is a 1907 apartment in an Arts Crafts building that I couldn’t begin to afford now. Not everyone owns and the renters are young professionals, mostly with kids, who see no prospect of ever saving enough to buy. Some of them are freelance, so they are now worried despite (maybe because) of government plans that are, naturally, more accommodating of the better paid, and of businessmen known to avoid tax.

We are looking out for each other — texts, WhatsApp, a conversation across the hallway or in the garden. Eggs, toilet rolls, hand sanitizer, baby wipes and of course our equivalent of acetaminophen were all but impossible to find for a week, so we helped each other out.

Many of us have signed up not only to the pharmacy group of helpers but to NHS Volunteers, which had a target of 2,500 people. So far, three times that number have stepped up. Some 20,000 doctors and nurses have come out of retirement, but the loss of death-in-service benefits, not unreasonably, has made some reluctant to work in high-risk areas — two doctors died this weekend.

Medical schools have been told to fast-track final-year students and to waive requirements for clinical exams in favor of assessment methods, in order to get young doctors registered and on the wards as soon as possible, a process that normally requires two carefully supervised years. Some will relish the challenge but many risk burnout amid the unmitigated horror.

And of course we are desperately short of PPE, short even of basic masks, which are being shared. We have only 8,000 ventilators and need 30,000 more. A number of businesses stepped up, an early contract going go Conservative-supporting vacuum cleaner tycoon James Dyson. Johnson turned down the opportunity to join the EU’s acquisition scheme, saying the public would understand why. But the public did not, at which point Johnson said he hadn’t declined the opportunity — merely missed an e-mail.

There are stories of spivs and shysters, of nurses being evicted from their apartments by landlords who fear they are bringing coronavirus home. But, in general, Britain, as divided as America, is pulling together. As I type, Johnson — now sick and isolating in Downing St., having only recently declared he was continuing to shake hands with everyone — told the nation that “there really is such a thing as society.” In 1987, Margaret Thatcher said exactly the opposite.

Both Britain and America now face unimaginable horror, the only difference one of scale. We must hope that when we’re through this — and we’ve tonight been told that Britain is likely to need to “keep the lid” on life for six months — there is a full and open enquiry into the events and policies that delivered us to this desperate pass. And we must hope too that the rediscovery of our common humanity, of our interconnectedness in the face of an indiscriminate virus, leads to fundamental changes to the way we live our lives and who we choose to lead us.

Today, March 31, I was due to be heading back to New York to work on The Village Trip 2020, the third installment of an annual festival celebrating the history and heritage of Greenwich Village. I founded The Village Trip with Judy Paul and Marc Garrett, owners of the Washington Square Hotel.

I haven’t given up hope that we can salvage something from the plans I formulated on my last visit, but it’s too early to tell. I’d like to think that we can at least go ahead with the concert on Sept. 26 in Washington Square Park and there celebrate our survival and renewal, just as our parents and grandparents celebrated the triumph of VE Day and VJ Day.

We’ll see. Meanwhile, I can’t help but shed a tear every time reporters from BBC News stand in front of the Washington Square Arch as they bring New York’s pain and suffering into British homes.

I’ve spent so much time in New York these past five years and have made so many precious friends there. Please stay home and stay safe, and I pray that I’ll be back to see you all before too long.

Thomson is the founder and director of The Village Trip.