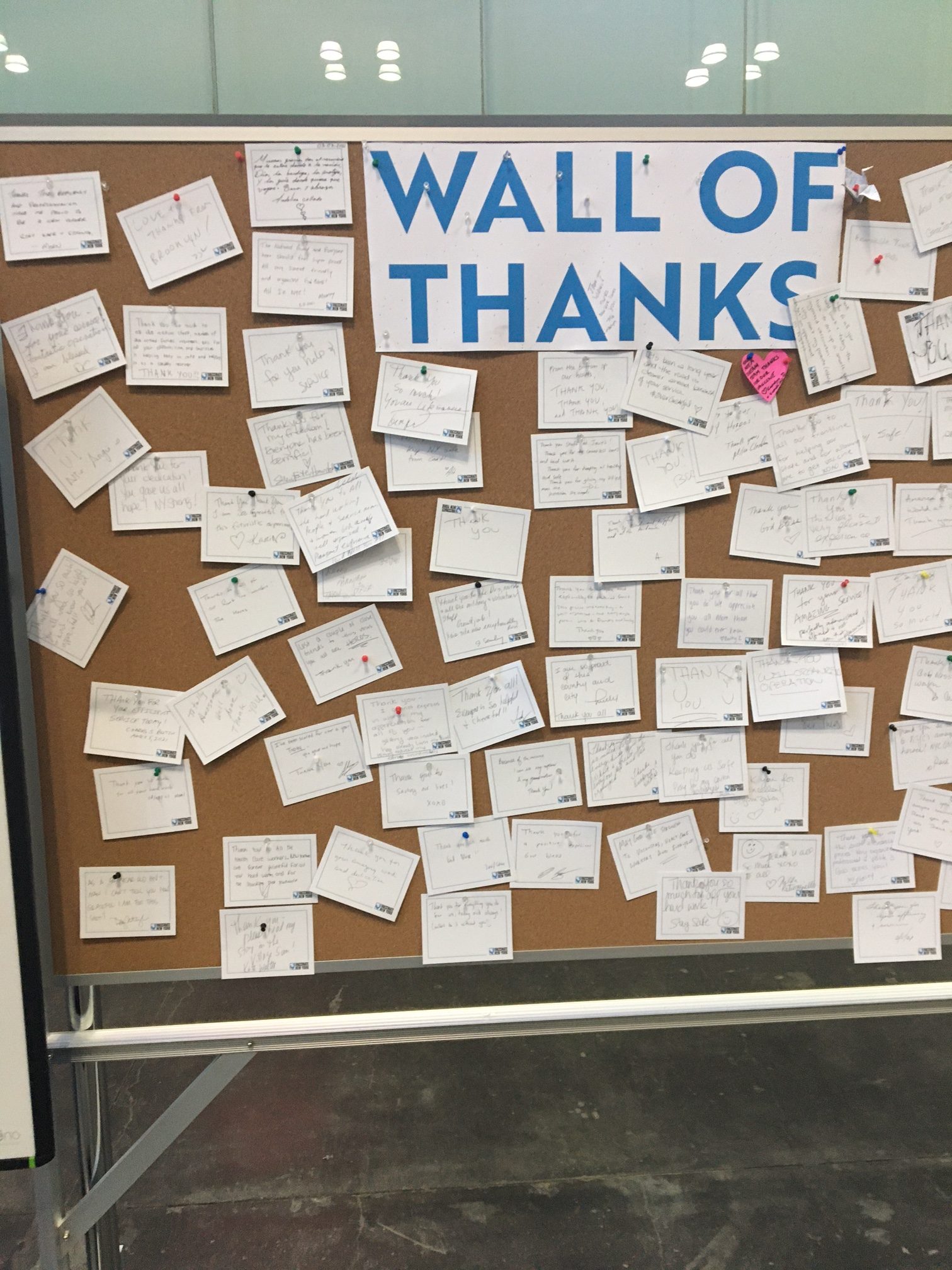 After getting vaccinated at the Javits Center, people can post a note on the "Wall of Thanks" bulletin board. (Photo by Kate Walter)

The second time around; Getting the vaccine

BY KATE WALTER | I felt a lot calmer when I went for my second shot at the Javits Center because I knew the drill. Call me superstitious. I wore the exact same clothes as the first time and packed my good luck charms again. It was still really cold at 25 degrees but at least the snow and ice were gone.

The bus was waiting on the corner. I hopped on and everything was fine until we’d gone about 10 blocks and some idiot boarded without a mask. (The driver said nothing.)

After he sat down, I called out to him, “Put your mask on.” He did but not over his nose.

I moved my seat.

When I got to the Javits Center it was much more crowded than my first time. Now there were at least 100 people ahead of me but the lines moved quickly, thanks to the New York National Guard directing us. I saw lots of people who didn’t look over 65. But in the last three weeks, more people had become eligible due to their medical conditions.

Yet I had numerous friends and colleagues in New York their early 60s who didn’t qualify for the vaccine. I felt bad for them. I also knew couples, like the gay men across the hall, where one qualified but the other didn’t, due to an age gap.

A healthy neighbor, who is 64, said, “It’s the first time I ever wished I was older.”

I shuffled along to the Muzak as we all maintained six feet apart. I was grateful to see a hydration station and grabbed a bottle of water.

I wondered how people would tag me. I was wearing striped Adidas sweatpants, short black boots trimmed with faux fur and a stylish black parka. Manhattan, I thought.

As I played my silly guessing game, I couldn’t help but notice the majority of people moving along the line were white. I didn’t know what to make of that.

This time when I got to the check-in desk, the woman asked me for my insurance card. I was really glad I had brought my Medicare card. When I mentioned that no one asked me for this the first time, she said, “I’m doing my job properly.” I hoped she did not take it as a criticism.

“I like your shirt,” I said as we finished up the registration. She was wearing a Black Lives Matter shirt.

“Thanks. Stay safe,” she replied.

As the next line moved toward the vaccination area, I chatted with a couple behind me. I heard them wondering about reactions. I felt like an old hand, reassuring them that I had almost no reaction to the first shot except for some fatigue. No headache. No fever. No sore arm.

When I got to the vaccination table, I commented to the intake worker that the center was a lot busier than three weeks ago.

“Yes,” she agreed, adding “Now we are doing vaccinations 24/7, around the clock.”

The way she said it, I got a sense that everyone at the Javits Center was proud to be part of this massive lifesaving operation.

This time I was asked, “What qualifies you for the vaccine?” I thought that was odd because this was my second visit and I wasn’t asked the first time. But since then the vaccination criteria had opened up. It was no longer limited to seniors.

“I’m over 65,” I explained, although she had already asked my birthday when I handed her my license. Were people borrowing IDs? Was that why she checked my birthdate?

“You look great,” she said.

She also asked, “What is your first name, Ms. Walter?”

“Kate,” I automatically replied, then quickly corrected myself, “I mean, Kathleen,” knowing it had to match my legal name on my license. I wanted to get this right.

Then the nurse came to do my vaccination. When I told her this was my second shot, she said, “Congratulations.”

I waited in the post-vaccination area for 15 minutes. As I headed toward the exit, I saw the “Thank You” bulletin board. I posted a message and went back out into the cold humming, “Happy Days Are Here Again.”

Walter is a freelance writer and the author of the memoir “Looking for a Kiss: A Chronicle of Downtown Heartbreak and Healing.” She is working on a memoir in essays about her life during the pandemic in New York City.