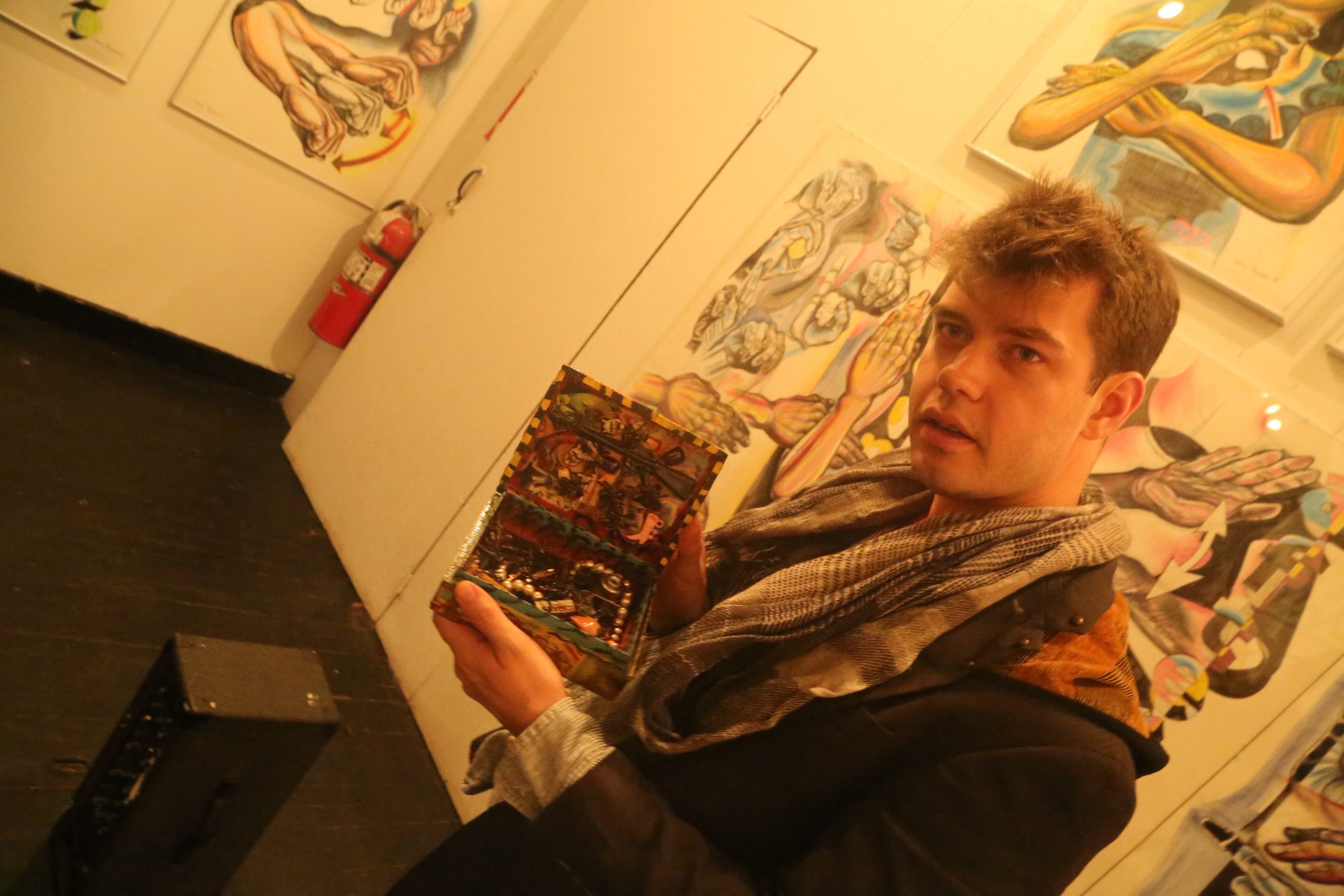 Gryphon Rue with a Clayton box at the Jerry Pagane show at the Clayton Gallery. (Photo by Clayton Patterson)

The flower, the wolf, the curator and Elsa Rensaa

BY CLAYTON PATTERSON | It gives me great joy to know Gryphon Rue curated the “Beauty Mark: Clayton Patterson” show at Printed Matter / St. Mark’s. He had worked with me when he was very young. Looking at photos.

It made me reflect and think back. He grew up with an Elsa painting in his bedroom.

I have been reflecting on two images since the opening of my photo show at Printed Matter.

The flower: I remember when I was young, watching a stop-action film on TV. A tightly wrapped, hard-as-a-rock bud, wrestling and  struggling to push off the outer shell and unfolding into a full-on flower.

The wolf was the other image. For Gryphon, like the wolf, the family is of utmost importance. Then, at the opening, in his own quiet way, circling the pack of people who came to the show. The curious and the loyal who came to see what he had produced. Quiet and almost silent. Fully in charge. Wearing his 1980s father’s wolf cap. The wolf cap was one of the custom jewels that Elsa produced following his father’s specifications.

Over years, I have watched the wolf, as the seasons changed, shed the various coats of youth and grow into a full-on strong, independent man — Gryphon Rue. Yes, he is now a man. No longer “the kid.” Gryphon is beginning to settle in on who he is. The musician and the curator.

As the curator, he is also an art historian. I listen to his YouTube talk on the use of sound in his great-grandfather Alexander Calder’s sculpture. He gave the talk at the Montreal Museum of Fine Arts. You grasp he knows his subject. Fully informed. An expert. A confident speaker.

At this moment in time he seems to have landed on music and curating.

The curator: Most people who look at my photos act like they are flipping the channels of a TV…click, click, click. He stops. He looks.  Comes back and looks again. He thinks, and he makes his choice.  That impressed me. The wolf.

At the show’s opening, the setup by Johanna Rietveld and Emmett was perfect. Standing on the street, Second Ave. at my back, looking at the front of the space: The photos were in a window on the left side of the front door; the second set was in the window  around the corner, on the St. Mark’s side.

At the right side of the front door, Jose “Cochise” Quiles and I sat at our table. On our table were Clayton books and caps. Cochise and I talked to people about the books and caps and chatted with friends.

Gryphon ruled a second table, the photo side. It was the curator’s day. It was his space. He held the crowd, the curious, the spectators, the investigators, the questioners and the time-wasters. I knew I was in good hands. I never spoke to one person about the photos. Never answered one question. Was perfect. Brilliant. He talked for me. I thank him for that. That was the day of the wolf.

I hope he carries on both paths, music and curating. I think the young man has much to offer and he can be a game changer.

After the show, in the following days, I had a couple of debates with Johanna on a subject we both know something about. I tend to pound my point. She is more connected to this topic. In the end, I have to accept she is right. She is a very capable director of St. Mark’s / Printed Matter. I respect that.

As to Elsa, my part of the opening was also to remember Elsa. Keep her love and respect in my thinking. As her memory continues to disappear, I have to be her memory.