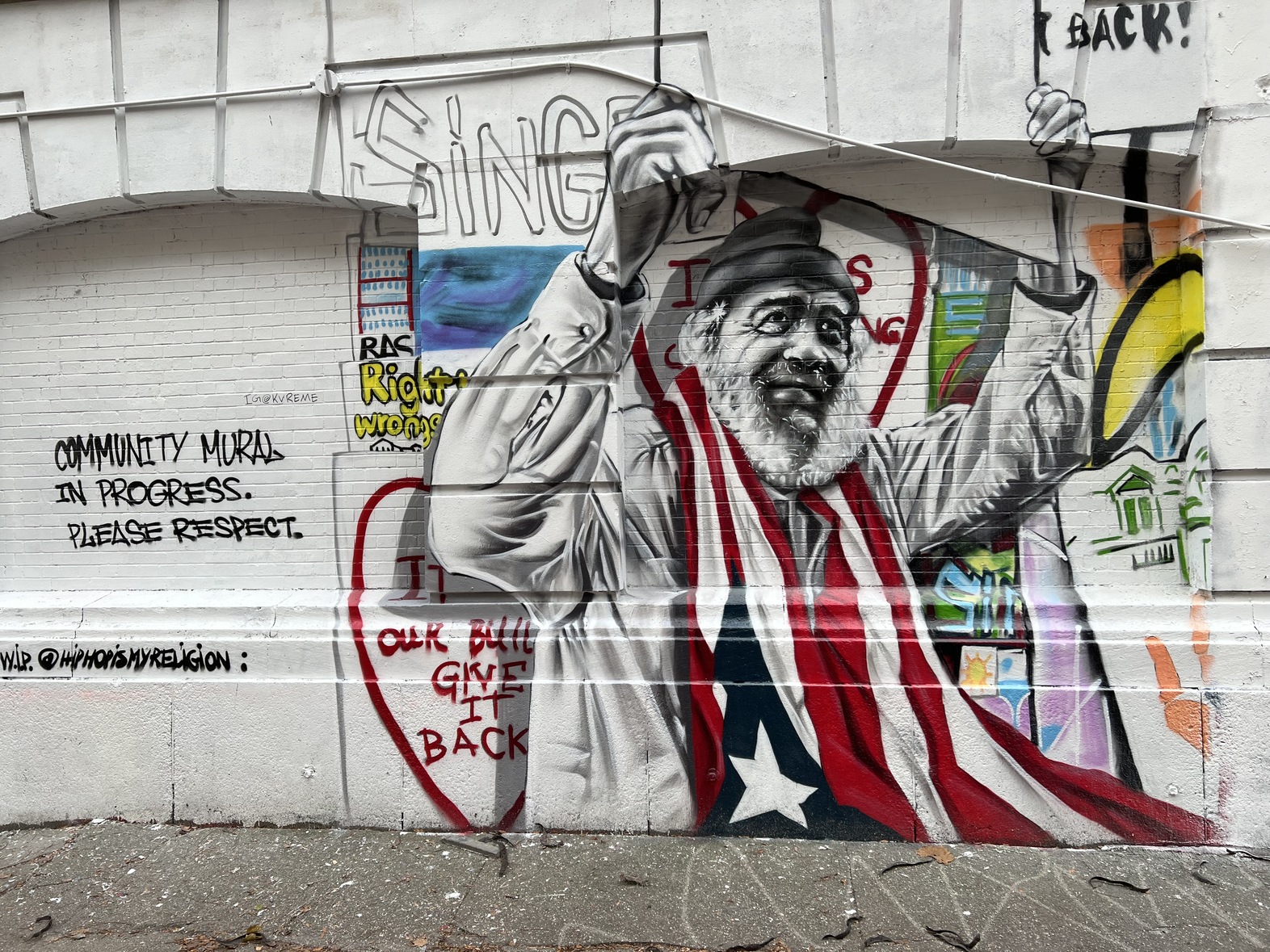 The almost-complete portrait of Chino García. (Photo by Bonnie Rosenstock)

The CHARAS Wall Project: An homage to the Loisaida community

BY BONNIE ROSENSTOCK | Musician/activist Daso (David Soto) said that every time he walked outside of his Piragua Art Space on E. 10th Street, which opened on May 1, he was “hit in the face over and over again” by what he saw on the opposite side of the street.

It was the back of the abandoned and deteriorating former CHARAS/El Bohio Community Cultural Center, the beloved arts space that has been the center of contention ever since 2001, when it was evicted by the new owner.

The long stretch of chipped and cracked wall was full of graffiti and fading posters, the street was strewn with trash, fallen leaves, dead rodents, dog feces and other unpleasant sights and smells.

“People told me they’re afraid to walk down 10th Street because it’s so dark and dirty,” Daso said. “I had to do something about it. I started having conversations with people about doing an outdoor art exhibit that our friends and family from the neighborhood can enjoy. As a good neighbor and small business owner, it’s my responsibility to be part of activating the space in a beautiful way.”

Daso consulted with Frank Gonzalez of Loisaida Realty and LES CommUnity Concerns; Alejandro Epifanio, executive director of Loisaida, Inc.; MoRUS (Museum of Reclaimed Urban Space); The Clemente; La Plaza Cultural; Why Not Care; and Jeremy Del Rio, co-founder and executive director of the Thrive Collective, and Christian Penn, also of Thrive, who selected and organized most of the artists and curated the logistics. Thrive Collective is a community of people who work toward social change through music and art.

“I had to sort out 20 artists that wanted to help,” Penn said. “Not all had much mural experience. This is for the people who could come two days in the cold and get it done.”

Daso said the mix of portraits, abstract art and graffiti art is meant “to beautify this whole area and bring this theme of unity to the wall of this building that has been very much abandoned and forgotten.”

The walls will be broken up into sections and the artists will each be assigned a space. Some artists will bring their own paint and material, and Thrive is donating as well.

The artists — some local, some not — submitted concepts based on topics like El Bohio (“the hut”), celebrating community, CHARAS founders and more. Those selected include (as of this writing) Will Power, Danielle Mastrion, Marissa Molina, Christian Penn, Nico Collazo, Michela Muserra, Jodie Dareal, Dast One, Juan Carlos Pinto, Charlie Elo and Al Diaz, the well-known graffiti artist with the tag SAMO, a onetime collaborator of Jean-Michel Basquiat

On Sat., Nov. 12, volunteers gathered at the site to clean up the streets, filling more than a dozen trash bags. That Sunday, they power-washed the walls, blasting off the posters, while other volunteers swept more of the debris into bags and the water into the streets.

“You wanna rock with me?” said Power on Monday evening, Nov. 14, as he was whitewashing his section of wall in preparation for his portrait of Carlos “Chino” García, co-founder of CHARAS. “If I weren’t part of this, I would be upset. Al Diaz is going to help me. I hit him up. I had him in mind ’cause it’s his neighborhood.”

The finished portrait is startling in its likeness, power and beauty. Power created it from a photograph of García, in which he wore a scarf, which Power changed to the Puerto Rican flag. He is saving the left side of his space for additions by SAMO.

“We are celebrating and honoring our leaders and the founders of CHARAS and those that came before us who inspire us to do what we do,” Daso said. He got very emotional talking about CHARAS because Salvador Becker (the “S” in CHARAS) had come by to visit a little before our interview.

“He said if it weren’t for Chino, he’d probably be dead,” Daso recounted. Daso added that he had been going to CHARAS since he was 6 years old, and it kept him away from gangs and drugs and focused on the arts. His mother, Angie Hernandez, was also one of the place’s unlisted co-founders. “I always acknowledge my mom for the work that’s she’s done in activism in this community, with bomba y plena, traditional Puerto Rican folk music.

“This is the type of movement that I love being a part of because it inspires people to stay away from things that can take your life and [instead] move you in a direction of empowerment through this art, through our culture.

“This whole ‘us’ and ‘them’ thing,” he said, “we are all a part of this movement. Originally, there were a lot of Puerto Ricans involved, but along the way we have all these families and friends and people that have been a part. We are all ‘us.’ We celebrate diversity.

“The foundation of CHARAS was built on activating folks to get involved in their community, politics, activism through arts and culture,” he explained. “To me, it’s not just about a building. Regardless if we get this building back, whoever has billions of dollars to renovate the space to keep it as a community space that our artists can utilize, CHARAS is a movement, whether it’s this building, here at Piragua, La Sala de Pepe, Casa de Adela, Nuyorican Poets Café or the Lower East Side. It’s whatever gets us to work together as one people to engage the next generation.”

It’s an awesome experience to stop by, meet the artists and witness their unfolding creations over the next week or so.

Also, two events honoring Lower East Side icons will take place on Sat., Nov. 26. The first, from 2 p.m. to 4 p.m., is the unveiling of “The Mosaic of Chino García,” by Juan Carlos Pinto, the MetroCard muralist, at Olean For All People’s Garden, 293 E. Third St., between Avenues C and D, with live music by Daso and El Grupo Cemi/Gina Fuego. Then from 6 p.m. to 9 p.m., “LES Icons: The Art of J.C. Pinto” at Piragua Art Space, 367 E. 10th St., between Avenues B and C, through Dec. 10. It’s also Piragua’s first official art exhibit. Pinto requested to present his solo show there to celebrate the people of the Lower East Side, he said.