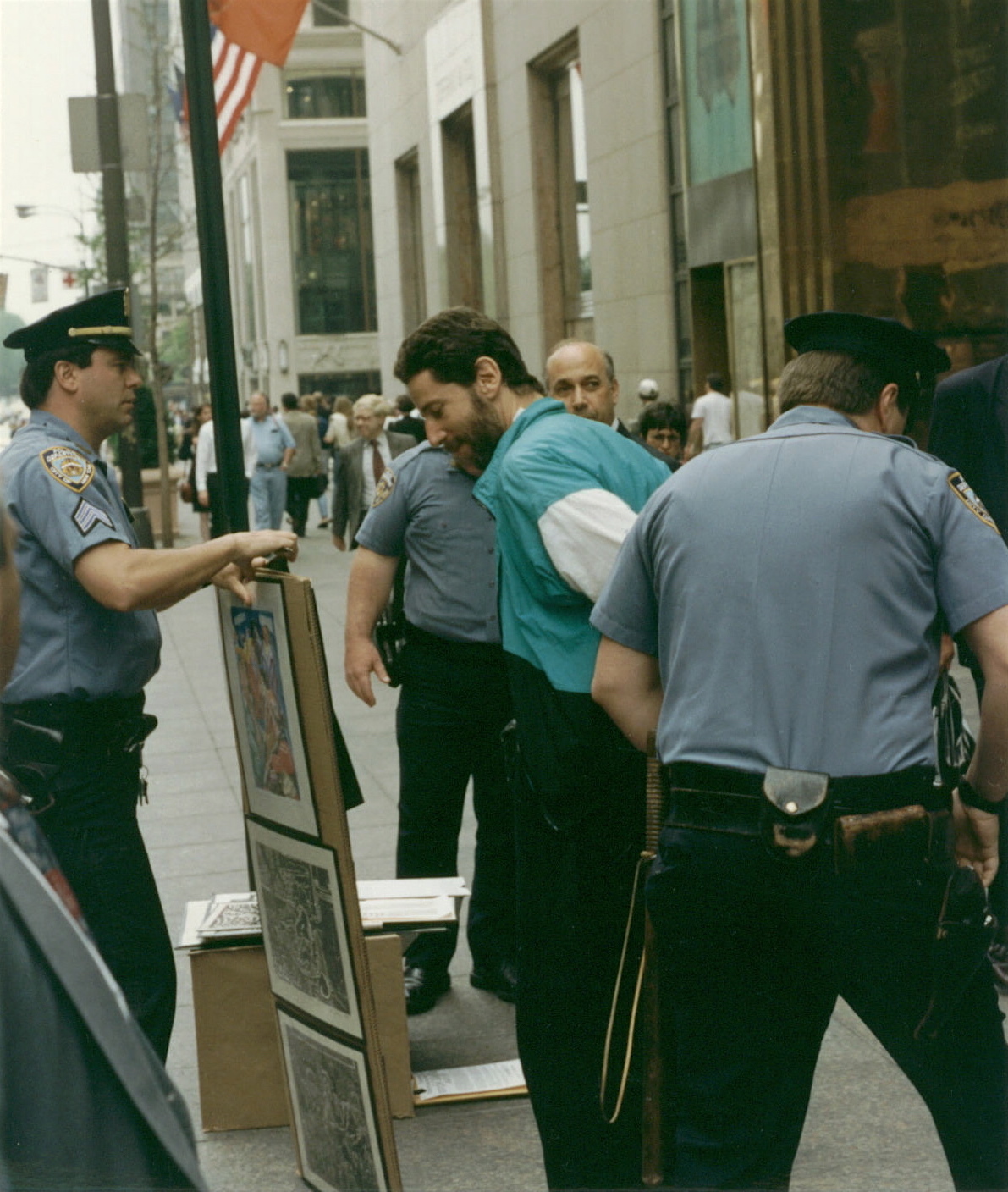 Gotta fight for your right to vend: Artist Robert Lederman being arrested in front of Trump Tower in 1994, on Donald Trump's order, according to Lederman. (Photo copyright Robert Lederman)

That didn’t take long; City back to cracking down on vendors

BY ROBERT LEDERMAN | At the end of January, as part of their newly enlightened wokeisim, New York City elected officials used Intro #1116 to remove the New York Police Department from vending enforcement, creating a “new agency” to harass, summons and confiscate street vendors.

But, just two months later, the mayor has announced that the N.Y.P.D. is back doing vending enforcement and that vendors are a “mess.” To the mayor and the business improvement districts (BIDs) street vendors are the equivalent of homeless people and drug addicts.

“‘The mayor and the local politicians didn’t want the police to deal with the homeless and peddlers but now that their plan failed miserably, the mayor is asking the police to help clean up the mess they created,’ a Manhattan cop said.”

So besides pretending that Intro #1116 was about helping immigrant vendors and increasing opportunities for all vendors, and that it would lead to less anti-vendor harassment, the ink hadn’t even dried on the new law before the N.Y.P.D. was back, specifically assigned to literally harass immigrant vendors out of the territory of the BIDs.

The crackdown was totally predictable.

Intro #1116 put the BIDs directly in charge of all vending. Did anyone actually believe they were going to get soft and fuzzy with vendors?

Intro #1116, the so-called Street Vending Modernization Act, was before the New York City Council for years in various forms, all of which failed to pass into law until this year. Written in part by the Street Vendor Project (SVP) and sponsored by many of the most liberal city councilmembers, the bill originally would have increased the number of food vendors by 4,000.

That was reduced to 400 new food vendors a year spaced out over 10 years, with the new licenses going to those on the waiting list, rather than specifically being handed out to undocumented immigrant vendors as the media wanted the public to believe.

Other than the SVP, no other vending advocacy group testified in favor of the new law. Hundreds of vendors, as well as representatives of the Mayor’s Office, testified against the bill. The measure failed to pass and shortly thereafter the director of the SVP stepped down.

Then, in November 2019, two Hispanic female vendors selling churros in a Brooklyn subway station were arrested.

City councilmembers who were previously supporters of Intro #1303 began publicly claiming that the arrests were racist, unprecedented and out of line with New York City vending policy. Not mentioned by the media is that these were some of the same city councilmembers who routinely demand vending crackdowns on immigrant vendors in their districts.

“Churro Ladies Arrested” became a national story with hundreds of articles and TV news pieces attacking the police for their anti-churro vending racism. The SVP did an impressive job of keeping the story alive and their efforts eventually paid off with a newly rewritten Intro #1116, supported by virtually all New York City elected officials, including the mayor.

The only problem with the churro lady story is that these women had been warned and summonsed repeatedly for illegal vending. No vendors, regardless of ethnicity, are allowed to sell in a subway station. No vendors are allowed to sell food without a vending license, a food-handling certificate from the city Department of Health and a regulation food cart with hot and cold water that is stored in an approved commissary.

Thousands of New York City food vendors, including white disabled veteran food vendors who are fully licensed and legitimate, are summonsed every year for vending infractions. If they fail to change their mode of vending so as to follow the vending laws they are sometimes arrested.

Timing is everything. The churro story and a video of the arrests perfectly fit the narrative of racist cops targeting people of color and elevated a very routine arrest into a national scandal.

The New York Times and many other media outlets knowingly misrepresented SVP as the only vending advocates in New York City and connected their campaign with the Black Lives Matter protests and other efforts at racial justice. The mayor and even the BIDs all began falling all over themselves describing vendors as the salt of the earth, essential workers and the embodiment of the American Dream.

However, behind the stirring rhetoric about how wonderful and important street vendors are to the city, Intro #1116 was actually a very bad deal for Gotham’s vendors. The law takes vending policy out of the hands of elected officials and puts it directly in control of the BIDs by means of a Street Vendor Advisory Board made up of BID executives, city officials and a token street vendor. Historically, most of the BIDs were started specifically to eliminate vendors.

Removing the N.Y.P.D. from the task of vending enforcement was also a very bad idea for vendors. While occasional incidents of police brutality against vendors have occurred, for the most part, police officers see vending as a very minor problem and actually try to avoid writing any vending summonses.

N.Y.P.D. officers typically ignore vendors unless there is a specific complaint about them, most often called in by a BID executive. By assigning the Department of Consumer Affairs to directly take over vending enforcement, the law will unquestionably increase the number of vending summonses issued and increase the number of arrests of unlicensed immigrant food vendors, the very people Intro #1116 was supposedly written to help.

Now, just two months after the bill was passed, the mayor, the BIDs and the media outlets who stirred up the fake churro controversy and pledged their undying love for all vendors, are once again calling for a fierce crackdown on the exact same immigrant vendors they were championing.

As it turns out, the only accomplishment of the Street Vendor Project, a front group partly financed by the New York City Council, was to con the media into believing they were vendor advocates. SVP has repeatedly done more harm to the entire vending community than any BID or elected official ever could.

Robert Lederman is president of A.R.T.I.S.T. (Artists’ Response To Illegal State Tactics). He has been a street vendor since 1961.