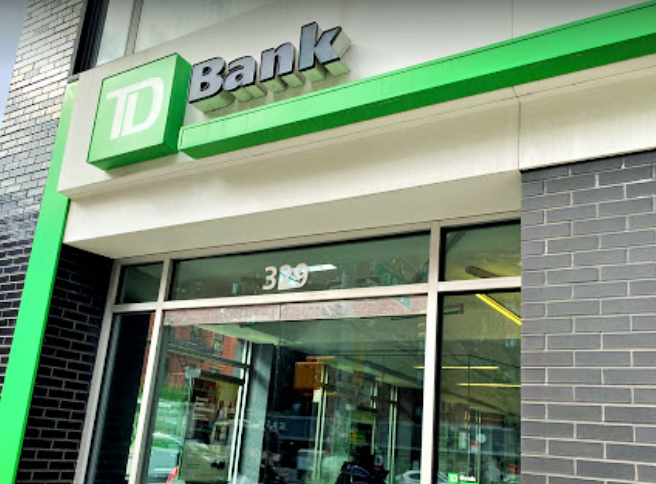 It's not clear if the TD Bank robbery is connected to two other morning weekend robberies in the outer boroughs. (Google Street View)

BY KEITH J. KELLY | Cops are searching for a robber who struck a Stuyvesant Town-area TD Bank at First Avenue and 19th Street on Sunday morning.

Around 10 a.m. on Feb. 27, the solo robber passed a note to a teller at the branch and escaped with $1,100, according to a police spokesperson.

No further details were available and police did not have a video of the suspect by Monday evening.

No one was injured and no arrest has been made.

It marks the third time this month a TD branch in the city has been hit in a morning weekend robbery. Police said an alleged bank robber wearing a puffy winter coat, black pants and a black mask got away with $600 in a robbery on Graham Avenue in Williamsburg, Brooklyn, on Sat., Feb. 19. No arrests were made in that case.

A robber also struck a TD Bank on Cross Bay Boulevard in Howard Beach, Queens, on Sun., Feb. 13 fleeing with $1,000 just before noon. The teller complied and there were no injuries in that case either.

That stands in sharp contrast to a suspect who was arrested this past fall after a one-man crime spree that included shooting a man during a subway robbery after robbing a TD Bank at Canal and Lafayette Streets of $1,100 on Oct. 18.

In that case, about 10 minutes after hitting the TD branch, the robber blasted a man in the leg in an attempted mugging on an Uptown N train at Union Square during the evening rush hour.

The following day, the same suspect attempted to rob a Chase bank branch at W. 28th Street and Seventh Avenue, according to cops. Damon Bailey, 38, was reportedly carrying two automatic pistols and a revolver when police arrested him without a struggle in the Union Square subway station shortly after the Chase bank incident.

The last three TD robberies all took place on weekend mornings. Police have not said if they think the trio of recent heists in three different boroughs are related.