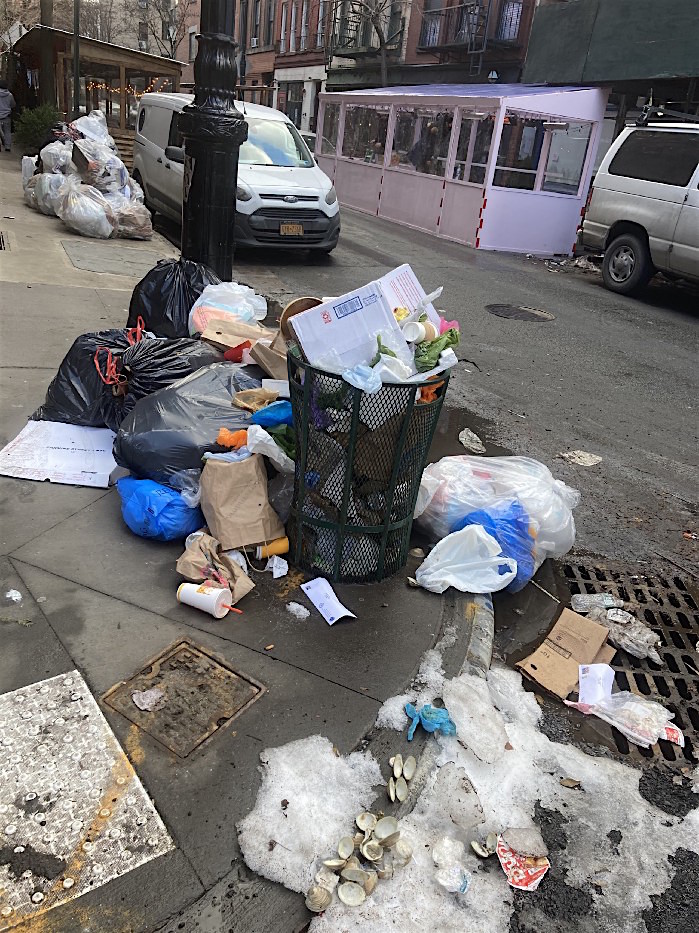 The morning after, at Bedford and Downing Sts. (Photo by Stuart Waldman)

Tailgating on a residential street: How not to remake New York

BY STUART WALDMAN | “Remake New York” is the new buzzword for pundits and politicians. It envisions the post-pandemic city as a blank slate on which to try out cool new ideas. There’s nothing wrong with cool ideas but actual policy requires more than slogans and press releases. It requires planning. It requires expertise. It requires debate and public input.

Permanent outdoor dining is a warning for what can go wrong when you remake New York on the fly. Outdoor dining was started as a temporary measure designed to help restaurants survive the lockdown, and the public took to it right away. After a grim spring, when moving vans were more common than taxis, people loved the sight of the funky shacks, festooned with fake flowers and painted in gaudy colors, that were bringing life back to the streets.

Elected officials love popular programs, especially if the official has worn out his welcome. Mayor de Blasio jumped all over outdoor dining, declaring that it must “be part of city life for years to come.” Just a few weeks later, his wish became an actual law mandating “the establishment of a permanent outdoor dining program” by October 1, 2021. In the blink of an eye, and with no debate, the city tossed out long-established policy, ignored long-established zoning restrictions and gave away public land — sidewalks and roadways — to private businesses.

Local Law 114 is a textbook example of how not to make policy. At a single hastily convened hearing, members of the City Council tossed softballs to representatives of the restaurant industry and business improvement districts (BIDs). Representatives of the neighborhoods impacted by the new law were nowhere to be found. The official voice of these neighborhoods, community boards, didn’t learn what was in the bill until after it had passed.

The one saving grace of this whole misbegotten process was that the city had an entire year, after the bill’s passage, before the permanent program took effect. One would think that the mayor and City Council would have used that time for due diligence on a program they’d cobbled together so quickly. Instead, elected officials took the three-monkeys approach: neither seeing, hearing and certainly not speaking of the problems that came with outdoor dining.

Noise. Anyone who has ever walked into a New York restaurant is familiar with that wave of sound the moment you open the door. When a restaurant operates on the street, the sound resembles a tailgating party. Every night, a raucous, alcohol-fueled din echoes off buildings on formerly quiet streets and through windows of apartments whose leases had guaranteed the right of “peaceful enjoyment.”

Trash. Outdoor dining shacks make plenty of their own, but they make even more by blocking sanitation access to adjoining buildings. Having no place to put trash, frustrated supers will drop bags at the nearest corner. The bags sit there for days, outdoor dining for neighborhood rats.

Sidewalk access. Harried pedestrians find themselves squeezed between tables and chairs on paths as narrow as the aisles of a 737. Those with walkers and in wheelchairs find navigating a street full of shacks particularly challenging.

Hazards. Propane heaters, which the F.D.N.Y. identifies as a major fire hazard, abut flammable umbrellas and tablecloths. Power-guzzling outdoor electric heaters, while less dangerous in the short term, fuel the long-term disaster known as climate change. (Right as New York welcomed the mass deployment of outdoor electric heaters, Paris announced that it will be banning them because of climate concerns.)

Outdoor dining also causes problems for the city government that created it. The program has spawned a chaotic and costly bureaucracy that’s cobbled together with staff from no less than five agencies. Instead of enforcing regulations, they spend much of the time tripping over each other’s toes or passing the buck.

An obvious question hangs in the air: Why make this program permanent?

It’s not as if the average restaurant will benefit. Once indoor dining returns, for the vast majority of restaurants, it will work like it has for existing sidewalk cafes. Full tables outside mean empty tables inside — and vice versa. Landlords, however, will do quite well as they increase rents on new leases. Those higher rents will be based on additional table space on land given free of charge by city taxpayers. It’s the real estate industry that will make a killing from permanent outdoor dining. And is any New Yorker surprised by that?

It’s not as if a permanent program addresses an unmet need. In pre-pandemic New York, diners weren’t exactly crying out for more outdoor options. Even with 65 million hungry tourists wandering the streets each year, there were no long lines at sidewalk restaurants. But let’s say the demand for sidewalk restaurants were somehow to increase in post-pandemic New York. Expansion could be far more easily accomplished through changes in existing regulations rather than through a new law and cumbersome bureaucracy.

Roadway dining is another story. Dining shacks are placed in parking spaces because the sidewalk is too narrow to accommodate them. These are most often on quiet streets that are zoned for residential use. Allowing a noisy, disruptive commercial enterprise to operate outdoors and at night on these streets makes residential zoning meaningless.

I live with a popular dining shack beneath my window. As I prepare to post this, the nightly party is in full swing. On the street, the sound level hovers at 70 decibels, vacuum cleaner level, according to my decibel-meter app. Inside, the din, only slightly muffled, is more like the soundtrack of a wild bar scene in a western movie, a scene that goes on for hours. Despite this, that shack should stay right where it is. COVID-19 is still with us and the economic well-being of fellow New Yorkers depends on the restaurant’s survival.

But once the emergency is over, once restaurants can again operate inside at full capacity, there will be no need for outdoor dining on my street or any street. The shacks, and Local Law 114, should be dismantled. However New York is going to change after the pandemic, those changes should come through planning, not on impulse. We should welcome new ideas but we should also challenge them. We should debate fully, openly, with all stakeholders at the table. If we’re going to remake New York, let all New Yorkers have a voice.

Waldman is a writer and activist living in Greenwich Village.