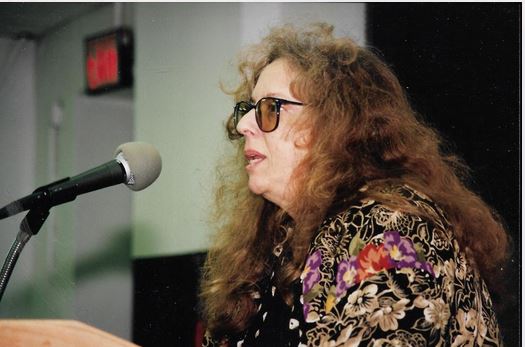 BY THE VILLAGE SUN | Susan Leelike, a longtime East Village activist on tenant issues, community gardens, small business and quality of life, died on Sat., Oct. 26. She was 81.

The blog EV Grieve reported that she was admitted to the hospital on Oct. 24 with cardiac issues.

Lisa Ramaci, a former Community Board 3 member, wrote a lengthy tribute to her good friend and ally:

“Her name was Susan Leelike, and she was a city and neighborhood treasure,” Ramaci wrote. “She was born in 1938, into a very different New York City, to parents of Russian Jewish extraction; both of her parents were communists, and she was a true red diaper baby who lived for the vast majority of her 81 years in either the West or the East Village, the last 50 of them on our side of the island.

“She co-founded GOLES (Good Old Lower East Side) in 1977 with her friend Floyd Feldman, with the objectives of providing tenant advocacy and shining an early spotlight on neighborhood preservation.

“Among other things, they envisioned the transformation of an underutilized Department of Sanitation facility, in one of Mayor LaGuardia’s old former city markets, as a perfect spot for a theater; without their creativity and tireless efforts, Theater for the New City would not today be calling E. 10th St. and First Ave. home.

“She was also a founding member of the Shelter Task Force, created in an attempt to block the city from overloading the East Village with homeless shelters, and of BASTA, formed to regulate and better conditions at the infamous Third St. Men’s Shelter, a processing shelter for the homeless, since the city was doing absolutely nothing about the horrific site they were supposed to be overseeing.

“Through her — and others’ — years-long efforts, the shelter was cleaned up and became a positive resource for the East Village rather than a nonstop source of thievery, drug-dealing, garbage, violence and menace.

“In the 1990s, Susan and her neighbors on 10th St. between First and Second Aves. took on the 24/7 drug dealers that infested so many streets of the East Village back then and won; this on top of helping to gut-rehab an abandoned, fire-ravaged tenement building that she had called home since 1982. Now a fully-functioning H.D.F.C. [Housing Development Fund Corporation], it survived and thrived, in no small part, to her unceasing labors, and the success of her undertakings helped to turn that block into the thriving hot spot that it is today.

“She was a founding member of the Democratic Action Club, formed to take on and eradicate the issue of the homeless encampment in Tompkins Square Park, another city-ignored situation which turned one of the only green areas in the neighborhood into a filthy, drug-ridden haven for the homeless, while putting it off-limits to neighborhood residents. Anyone who utilizes the park today — its playgrounds, asphalt, dog run or lawns — can thank, among many others, Susan.

“She tried to fight for the preservation and renovation of the now-closed-and-awaiting-demolition Essex St. Market, one of only two instances I can recall of a battle in which she was vanquished.

“I called her the East Village Jane Jacobs — her love of New York and its historical significance, her knowledge of the neighborhood and its architectural and personal history, her memories of the things that used to be here that have vanished in the mists of time, were encyclopedic, and the loss of the memories she carried in her head is incalculable.

“She labored in obscurity and has passed into the shadows with no fanfare, save for that given to her by those of us who loved her, her sense of humor, her stubbornness, her sharp laugh, her crankiness, her belief that a city’s history and the everyday people who made it mattered, and above all, her fierceness in fighting for the things she believed were right.

“Susan was my friend for 30 years, and on Oct. 26. 2019, I was holding her hand as she lost that second battle, surrounded by the family and friends who cherished her, and whom she loved so much in return.

“Her passing has ripped another hole in the every-evolving quilt that makes up New York; while to some it may seem tiny, to those of us who knew, put up with and adored her, it is a massive, gaping one that will never be filled. There aren’t many like her left today, and we have just lost one of the good ones.”

Howard Hemsley, a former East Village Democratic political activist, was a very close friend and ally of Leelike. He’s retired now in San Jose, Costa Rica, and is active with Democrats Abroad and Expats and Students for Warren.

Hemsley posted the following on Facebook after Leelike’s death:

“Susan Leelike, my oldest, dearest friend and buddy, died today at 81, leaving behind a grown son and two grandchildren. Susan was my ally, helpmate, inspiration, and sounding board for over 30 years.

“In 1988, when Martha Danziger, Community Board 3 district manager and neighbor, drafted me, her block president, to lead the fight against a new homeless shelter proposed for E. First St., one block east of our block, Martha told me to talk to Susan, who was an original member of the Shelter Task Force that had been meeting for 15 years about the horror-show conditions at the existing Men’s Shelter on E. Third St.

“Susan had the notes and personal recollections of the broken promises and useless meetings she attended with dogged determination. In addition, Susan was a co-founder and current director of GOLES (Good Old Lower East Side), a pioneering tenant advocacy organization.

“For over two years Susan and I went to meetings together and strategized. We won on both issues — stopping the First St. shelter plan and working to improve the Third St. shelter — in great part because of her efforts for almost 20 years.

“In the ensuing years, Susan and I were a team that fought many neighborhood quality-of-life battles with more than our share of victories. Brainy, feisty and notoriously combative, she fought with me privately and publicly, so often that strangers assumed we were married.

“She was one day older than me and I ribbed her constantly about her advancing oldladyhood while I, of course, would remain young forever. She loved to predict that two days after her death, I would be older than her. My heart is broken. She will be missed.”

Issues that Leelike continued to be involved in recent years included the fight against the city’s and Department of Housing and Preservation’s move to
make H.D.F.C.s adopt a restrictive 40-year regulatory agreement; and, more recently, the opposition to the Parks Department’s efforts to tighten the Green Thumb regulatory agreement for community gardens.

Earlier on, Leelike, who then owned a store, was a leading member of a now-defunct group, Sweet 14, a sort of unofficial business improvement district meant to help the shops along E. 14th St.

In later years, she remained extremely concerned about the fate of supermarkets and small businesses in an increasingly gentrified landscape. She recalled how former Councilmember Ruth Messinger had tried to implement “commercial rent protection” in 1985, but that there had been little help forthcoming from City Hall in the more than three decades since.

In an e-mail in 2017, Leelike wrote: “When Ruth Messenger was the Upper West Side councilperson, she helped create the Small Business Task Force. It was led by a wonderful cleaning store owner. It’s so long ago I don’t remember his name. Gale Brewer was there, with Ruth and an intern named Michael.

“I do remember how hard everyone worked to get the word out that we were losing our small family stores at a fairly rapid pace due to enormous rent increases.

“Learning from Sweet 14, which failed to protect their stores, the S.B.T.F. tried to have the businesses lead the fight but the results were the same. The state again told the city that they needed to pass legislation protecting small stores, and the city asked the state for the required enabling legislation.  Family businesses do not have the time or resources to lobby and take time off from work to save their business.

“Ruth and her staff worked hard on the issue, as did the hatters’ union, which donated a small office, and a few banks sent representatives and at least two events were mobilized. But business owners are not organizers, and after a few years everyone got discouraged.

“And now rents have really gotten out of hand, and the extraordinarily greedy desire for profit is pushing them even higher. No matter how outrageous it is, it is hard to stop. And this is no longer just a Manhattan issue.

In another e-mail Leelike wrote, “Today there are few mom-and-pop stores left. What a shame. The vitality and diversity that made our city interesting has been replaced by chain stores and entertainment venues. One big loud party! Each neighborhood replicates the other.”