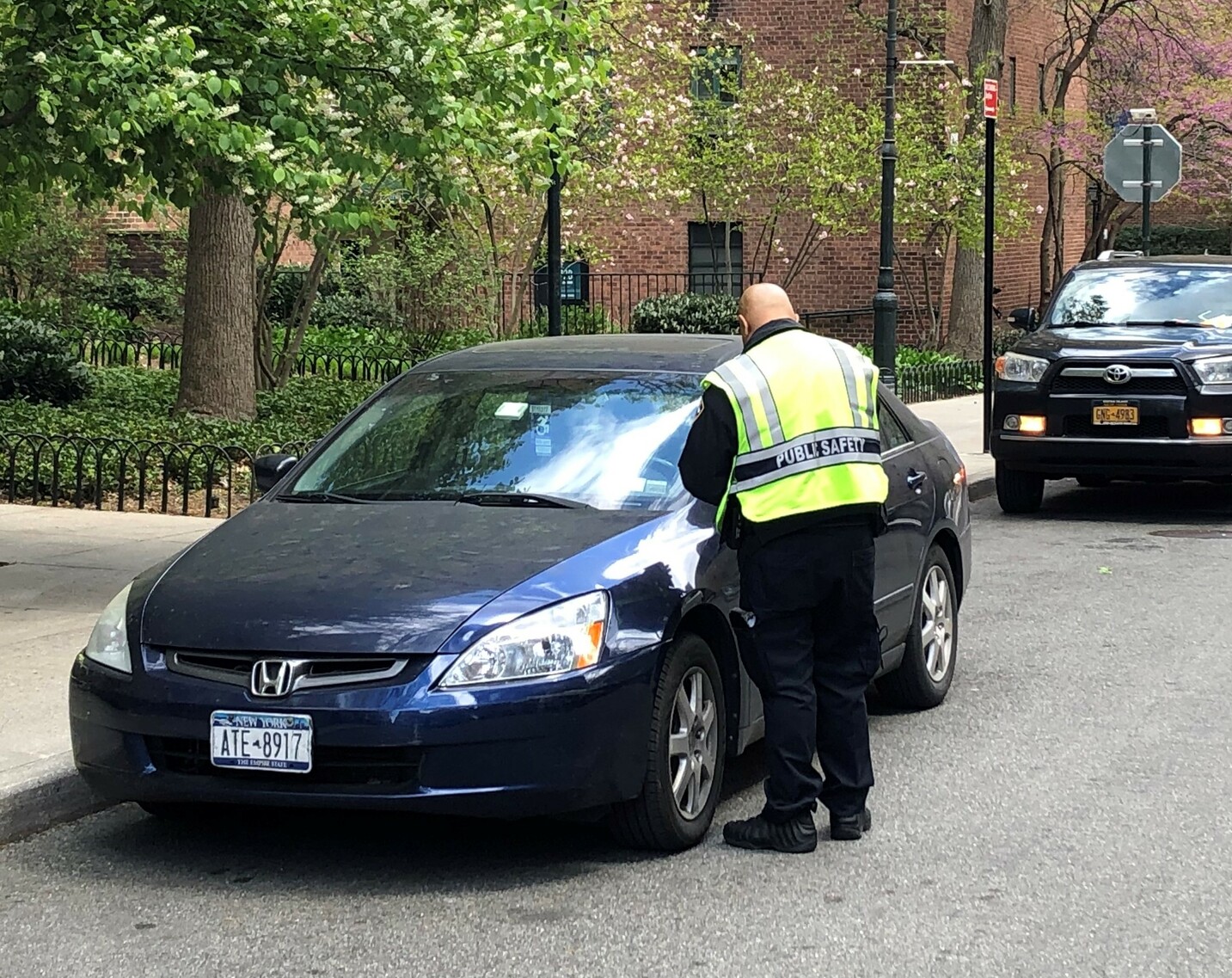 Ticketing blitz: New York City parking tickets can be slapped on vehicles on the private loop roads in Stuyvesant Town, and have nearly doubled in price to $115 per ticket after Beam Living recently changed the signs from "No Parking" to "No Standing Anytime." Above, a Stuy Town security member tickets a car inside the complex. (Photo by Keith J. Kelly)

BY KEITH J. KELLY | New York Police Department ticket agents are apparently no longer honoring a decades-old agreement reached between the Department of Transportation and former Assemblymember Steve Sanders that allowed a 15-minute grace period for residents to make short stops in no-parking and no-standing zones on the four interior loop roads of Stuyvesant Town.

A recent change on the signage from “NO PARKING” to “NO STANDING ANYTIME” also jacked up the cost of a ticket, nearly doubling it from the old fee of $60 to a new, hefty $115 fine under the current rule.

However, the Stuyvesant Town/Peter Cooper Village security team, which also has N.Y.P.D. parking ticket enforcement power, says it is actually granting a 30-minute grace period before it will write tickets to vehicles it catches in the “No Standing Anytime” zones, provided they have flashers on. But the Stuy Town security spokesperson conceded they cannot stop the N.Y.P.D. from enforcing the letter of the law with no grace period whatsoever.

The confusing jumble comes about because although the four loop roads — off of First Avenue, 20th Street, Avenue C and 14th Street — are technically considered private roads, Stuyvesant Town’s owners have long allowed them to be governed by New York City parking regulations. The city is apparently very happy to reap the revenue it gets from residents caught on the loop roads.

N.Y.P.D. ticket agents, as well as the development’s security force, can issue the hefty tickets that amount to $115 per violation.

The jumble of confusing and overlapping regulations has caught the attention of City Councilmember Keith Powers.

“Our office has been engaged in an ongoing dialogue with Beam Living regarding parking at Stuyvesant Town and Peter Cooper Village to create better clarity for residents on the parking regulations,” said Kaye Dyja, a spokesperson for Powers. But, so far, there is no resolution.

A spokesperson for Beam Living, which manages the complex for the Blackstone hedge fund — which owns the sprawling 80-acre East Side complex, which houses close to 30,000 tenants — acknowledged a 30-minute grace period. But he also conceded the N.Y.P.D. ticket agents are under no obligation to honor the grace period, even if Stuy Town security personnel will grant it.

“The loop roads at Stuy Town are private roads that we allow public access to,” he said. “We know that navigating a community of our size can be quite difficult, so we allow a 30-minute grace period for drivers who need to temporarily stop along our loop roads — as long as they have their flashers on to indicate they are not parked. This generous allowance is longer than any historically allowed here.”

At the same time, the spokesperson acknowledged that the city ticketing agents are under no obligation to honor the grace period that the private security force grants to vehicles with their flashers on.

“We appreciate our residents and most of our visitors being good neighbors and following the rules,” he said. “When people don’t comply, several of our public safety officers are sworn NYC peace officers and have the authority to issue parking summons. This does not limit any city agency’s authority to issue parking violations here, as they have jurisdiction in the city. We encourage all residents and visitors to follow the signage and parking rules to avoid being ticketed.”

He also said that Beam Living recently replaced the “No Parking” signs with “No Standing Anytime” signs, and he said the new signs removed a line that said the signs were D.O.T. approved.

“We recently changed the signage on the right-hand side from ‘No Parking’ to ‘No Standing Anytime’ because there was consistent abuse of the rules. The new signs also removed reference to the Department of Transportation at their request, as these are private roads.”

However, all the “No Standing” signs observed by The Village Sun still had a small line on the bottom indicating that they were D.O.T. approved signage — which, since these are private roads, are technically not supposed to carry such a notation.

Full disclosure: This reporter, who lives in Stuyvesant Town, in the past avoided a fine when he pleaded not guilty to a parking ticket written by an N.Y.P.D. officer in 2019 when the reporter showed up with a copy of the 1992 letter from D.O.T. to then-Assemblymember Steve Sanders reaffirming the 15-minute grace period. The D.O.T. letter at that time said that the agency conveyed this information to the 13th Precinct. (The letter was supplied to this reporter by then-newly elected City Councilmember Keith Powers.).

This March  a car registered to the reporter was issued tickets on two occasions while parked on the loop road. While neither of the recent tickets issued by Stuy Town security had a time stamp when “first observed,” a parking violations ruling rejected the not-guilty plea on the first ticket — despite including the 1992 letter between D.O.T. and former Assemblymember Sanders. The reporter never heard a ruling on the second case and ended up paying the fine on both — amounting to $230.