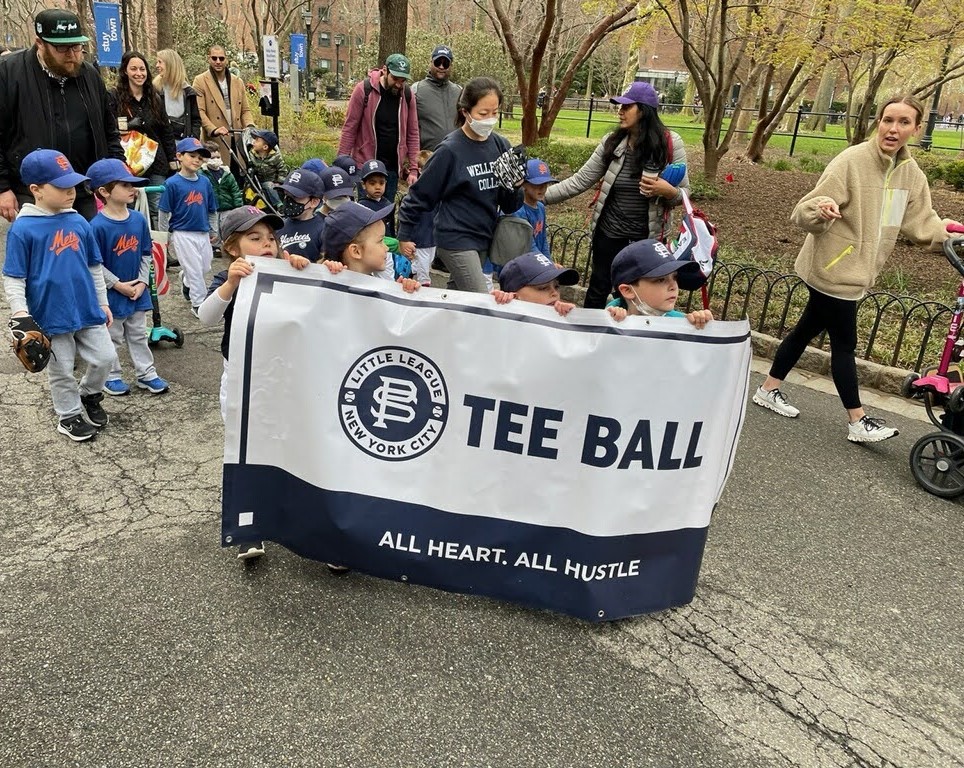 The youngest division, the Tee Ballers, made their way through Stuyvesant Town during the open day parade. (Courtesy P.S.L.L.)

BY KEITH J. KELLY | Hundreds of players and parents, along with local politicians, were led by bagpipers and joined by Mr. Met when the Peter Stuyvesant Little League held its opening day parade through Stuyvesant Town to Con Ed Field on April 2.

“This is our first parade since 2019,” P.S.L.L. President Seth Coren told the assembled masses when the procession reached historic Con Ed field.

City Councilmember Carlina Rivera told the crowd she was a lifelong Mets fan. Councilmember Keith Powers said he actually played in P.S.L.L. as a kid and said, “I hope you have more success than I did.”

Manhattan Borough President Mark Levine also made the scene — and drew cheers when he delivered only a two-sentence speech: “The kids want to play,” he noted.

Coren said the league is rapidly rebuilding, with just under 600 kids enrolled, but admitted numbers are still behind the pre-COVID peak of 760 players of baseball, softball and a Challenger Division.

“This year we’re still down about 20 percent,” he said.

“Everybody is rebuilding this year,” he noted. He said the Our Lady of Sorrows-sponsored teams from the former Felix Millan League on the Lower East Side are now playing within P.S.L.L. He said O.L.S. was seriously hurt by the East Side Coastal Resiliency project, which will wipe out the baseball fields along the East River during the two-phase reconstruction project.

During the pandemic, Coren noted that P.S. 40, P.S. 116 and the Epiphany School — the bedrock schools for P.S.L.L. members — all saw double-digit declines in number of students enrolled.

And he said the declines were most pronounced in the lower grades.

“The seven-, eight- and nine-year-olds really thinned out [during the pandemic],” he said. This created an attrition problem and a skills problem for baseball and softball, he noted. “It was like a lost few years for the younger kids. You have some 10-year-olds who are picking up a baseball for the first time in two years,” he said.

But P.S.L.L. is responding with more all-yearlong programs, including fall ball and indoor training programs. The fall programs are using indoor facilities at Baruch College, as well as ballfields within Stuyvesant Town / Peter Cooper Village for younger kids and Randall’s Island for older kids.

“We actually have more kids playing year-round,” he said, noting the programs range from competitive travel teams to recreational teams.

The league’s boundaries officially run from around 13th Street up to 72nd Street. But enrollees can come from anywhere in the city to join the P.S.L.L. Challenger Division, in which kids with physical — including wheelchair users — and intellectual challenges can enjoy the thrill of playing ball, with the help of other league players.