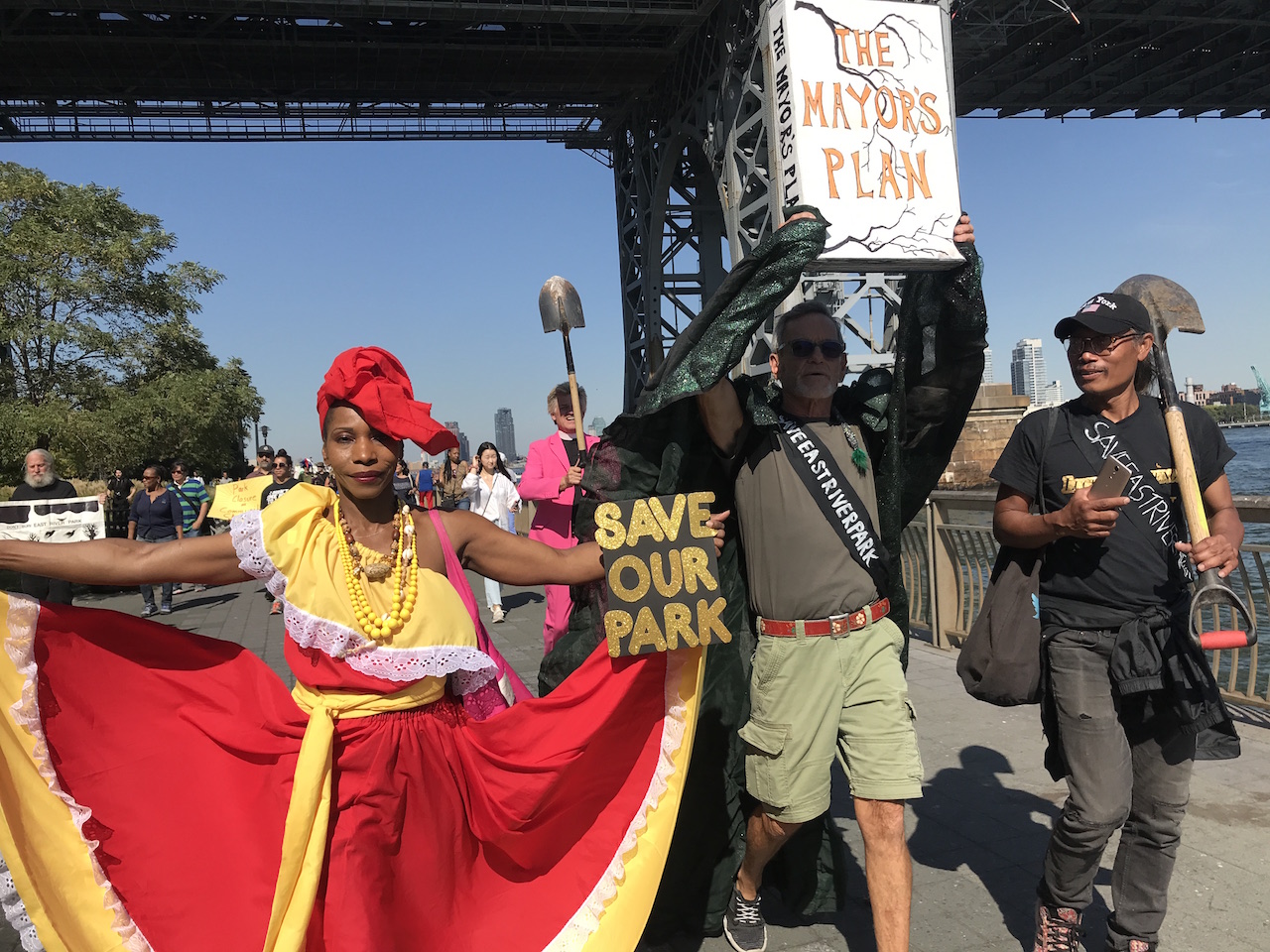 BY PAT ARNOW | It’s been eight years since Superstorm Sandy flooded our neighborhood.

It has been two years since the city decided to demolish East River Park to build a giant levee to protect our Lower East Side and East Village neighborhood.

It has been two years since residents reacted with dismay to that much destruction and began to ask the city to rethink the plan. After all, East River Park had helped absorb the storm surge and had survived — like our neighborhood, damaged but resilient.

It has been just over a year since we marched, some 400 strong, to Bury the Plan, Not the Park.

The city’s plan is to raze East River Park, add 8 feet of fill and rebuild the park. It is horrifying. There had been other, less destructive plans developed with community input that could be adapted.

A year ago, we delivered 9,000 petition signatures to City Hall opposing the mega-project. Hundreds had testified at hearings, and written and called elected representatives.

If city officials had listened, then we could now be preparing a greener flood-control plan that would protect our neighborhood and keep our park alive with all its glorious open space for our crowded neighborhood, with all its exciting biodiversity, with all its potential as a sponge for storm surges.

We could now be planning a more resilient park with new saltwater-resistant plantings. We’d be creating marshlands as the sea level rises. We’d be adding parkland over at least some of the F.D.R. Drive and building green walls along the highway where covering it would be too close to apartment buildings.

We could have a plan that would help slow climate change — for the earth and for our neighborhood. Instead, as soon as the city cuts down 1,000 trees and every other bit of greenery in the park that cools and cleans the air, we’ll immediately experience higher temperatures. We’ll gain only dirty air from years of digging up the park and then dumping onto it 900,000 tons of fill. The massive project will contribute to further climate change.

Now, the city will demolish our park in the middle of this pandemic when our crowded neighborhood needs its space more than ever. It will spend more than a billion dollars that the city cannot afford.

The project to bring flood control and rebuild the park is supposed to take five years. In the meantime, we are promised phased construction so that 40 percent of our park will remain open.

O.K., a lot of us are happy to continue having our park — except the city can’t trouble itself to give us interim flood protection. The city did a superficial study and said it wouldn’t protect us from another superstorm. We said, hey, just protect us from those less intense but still damaging storm surges that are much more likely. The answer was still no.

We are still defiant. Save East River Park.

Arnow is a founder of East River Park ACTION, a grassroots community nonprofit organization formed to advocate for long-term flood control that will retain much of East River Park and for interim flood protection for the Lower East Side and East Village.