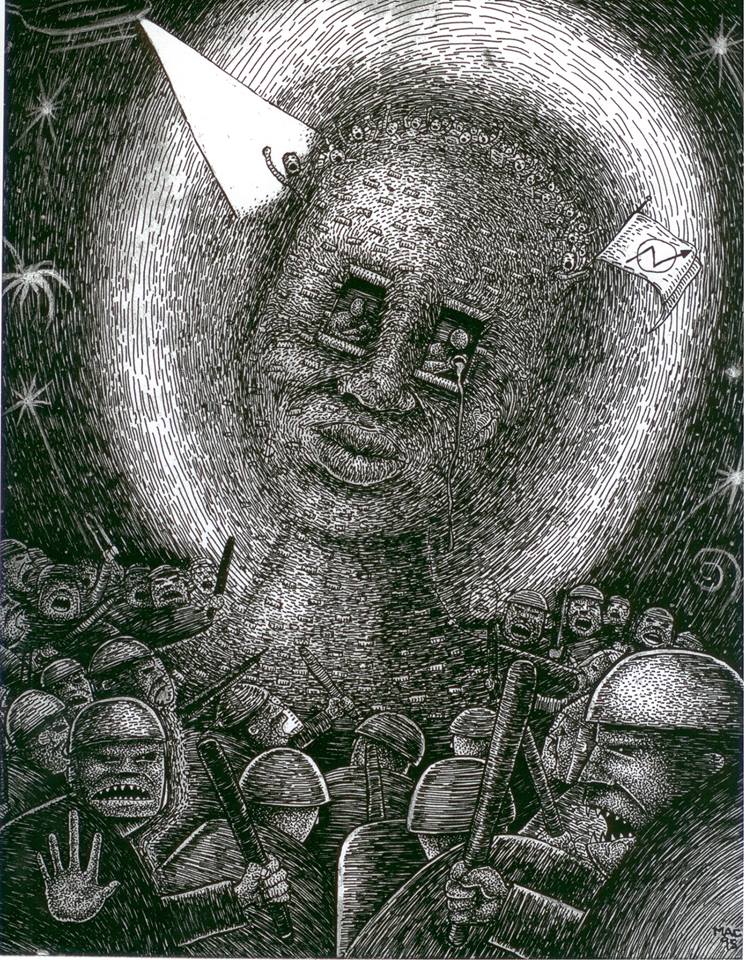 A native New Yorker, artist Mac McGill calls the East Village home. He was a squatter there during the neighborhood’s turbulent era in the 1980s and ’90s.

Today he lives in one of the former squats that was transferred to the squatters under a process started by former Mayor Giuliani and finished under former Mayor Bloomberg nearly 20 years ago.

McGill’s pen-and-ink work “Squat Eviction (early ’90s),” above, was done with a Rapidograph No. 1 pen. It shows a police helicopter shining a spotlight on a squat as police are preparing to clear out the building. A squatter is also seen defensively dumping a bucket of urine out the window, although the liquid also resembles a long tear. The zigzag-symbol squatter flag flies off the side of the besieged building.

A hypnotically pointillistic artist, McGill’s illustrations have appeared in The Progressive, Tikkun, The Source and World War 3 Illustrated, Chimurenga magazine in South Africa and Madburger and Warburger in Slovenia, as well as the books “Wobblies! A Graphic History of the Industrial Workers of the World” (Verso) and Mumia Abu-Jamal’s “All Things Censored” (Seven Stories Press).

McGill’s 2001 book “IX XI MMI” is in the permanent collection of the Library of Congress. He has exhibited his work in New York City at the School of Visual Arts, Theater for the New City, ABC No Rio and the Cathedral of St. John the Divine, as well as in Greece, Italy and Portugal, and occasionally performs by narrating his images over live music.

He also illustrated Marien Tillet’s adult fairy tale “Ogre,” published by Éditions CMDE in France in April. His forthcoming graphic novel, “Song for Katrina,” about the disastrous New Orleans flood of 2005, will be published in 2020 by Éditions CMDE.