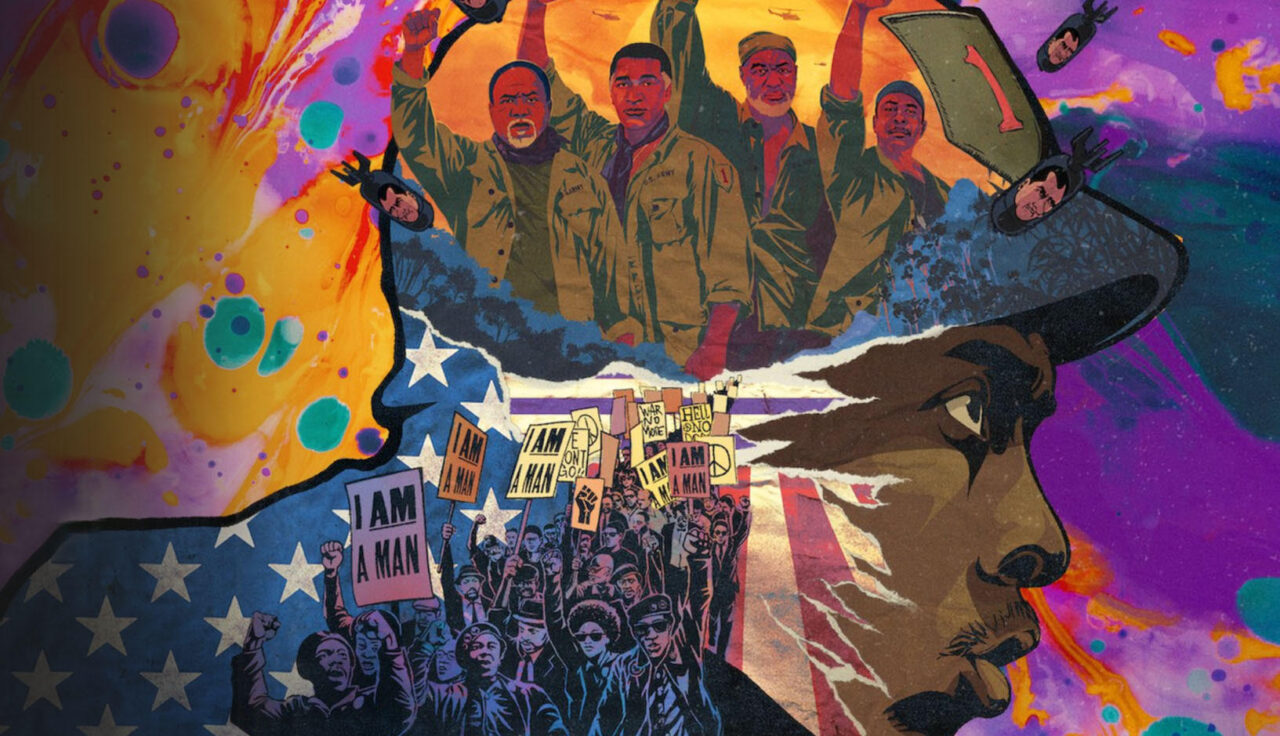 BY JUDITH MAHONEY PASTERNAK | In 1971, a squad of five Black American G.I.s in Vietnam was flown to a remote mountain in the jungle to find a downed C.I.A. cargo plane and retrieve its contents. Four of the five survived the mission.

Almost 50 years later, the four survivors reunite in Ho Chi Minh City, carrying U.S. and Vietnamese documents permitting them to return to the site of the earlier mission to find their comrade’s remains and bring him home for burial in Arlington. In fact, they also hope to find the $17 million in gold bars that constituted the plane’s cargo, which they found and buried rather than fighting their way back through the jungle to return the treasure to the U.S. government.

Spike Lee’s newest film, “Da Five Bloods,” juxtaposes the two stories, the wartime event and its belated sequel, shuttling back and forth for its entire two-and-a-half hours between past and present. In fact, it is telling more than two stories, perhaps more than can be comfortably contained in one movie, but from that ambitious goal it derives both its power and its weaknesses.

It is at once the story of a caper of sorts gone terribly awry; an account of the war that tore the United States apart from the rarely seen perspective of its Black G.I.s; a look at the war’s consequences and its terrible impact on those who fought in it and on the country where it was fought; and, for good measure, a retelling of the account in “The Treasure of the Sierra Madre” of the corrosive influence of gold on the people seeking it.

Dense, complex, blood-drenched and often painful to watch, the movie doesn’t meet its disparate goals with equal success, and there are plot holes and questions left hanging. It is undeniably uneven.

Yet, where the film does succeed, in its depth and scope, it is a great and unforgettable movie, possibly Lee’s masterpiece so far. But it could probably not have reached that height without the searing performance of Delroy Lindo in the iconic role of Paul, the desperate, maddened and most war-damaged of the four survivors. Lee has concentrated into Paul’s character every horror that the trauma of war can inflict on a soldier, and Lindo’s portrayal of Paul is a bravura performance, credible, harrowing and heartbreaking.

All that said, this is a review by a white woman of a movie about Black lives and experience and necessarily limited by that perspective. (I believe a similar limitation usually obtains when men try to portray women’s experience, but I think Lee has repeatedly transcended that limitation; one of the hallmarks of his work and his genius is his ability to see and show the full humanity of all his characters. His films rarely have villains, although in that respect, as in others, “Da Five Bloods” is an exception.)

There are literally dozens of minor stories crammed into the film that add atmosphere and nuance to “Da Five Bloods,” and possibly even affect the outcomes of the main stories in small ways, but add little to the themes of the horrors of war in general and the experience of Black soldiers in the Vietnam War. It should be noted, however, that several of the subplots involve women, always in sympathetic and supportive roles. (Unless you don’t count as supportive the exhortations for Black soldiers to abandon the war effort by the Vietnamese broadcaster known as Hanoi Hannah, played by Van Veronica Ngo.)

There’s more, much more, that can and will be said. People will be talking about “Da Five Bloods,” pro and con, for a long time. Luckily, we can watch from the comfort of our living room sofas.

But don’t expect much in the way of comfort. “Da Five Bloods” is many things, but none of them involve comfort. Greatness rarely does.

“Da Five Bloods,” directed by Spike Lee, written by Lee and Danny Bilson, Paul De Meo and Kevin Willmott. Music by Terence Blanchard, with songs by Marvin Gaye. Streaming on Netflix, where it is rated 16+.

Pasternak, who was born and raised in the U.S., is a writer, journalist and activist, now permanently living in Paris. She is the author of seven books, a handful of published short stories and poems, and hundreds of articles and essays, many of them movie reviews.