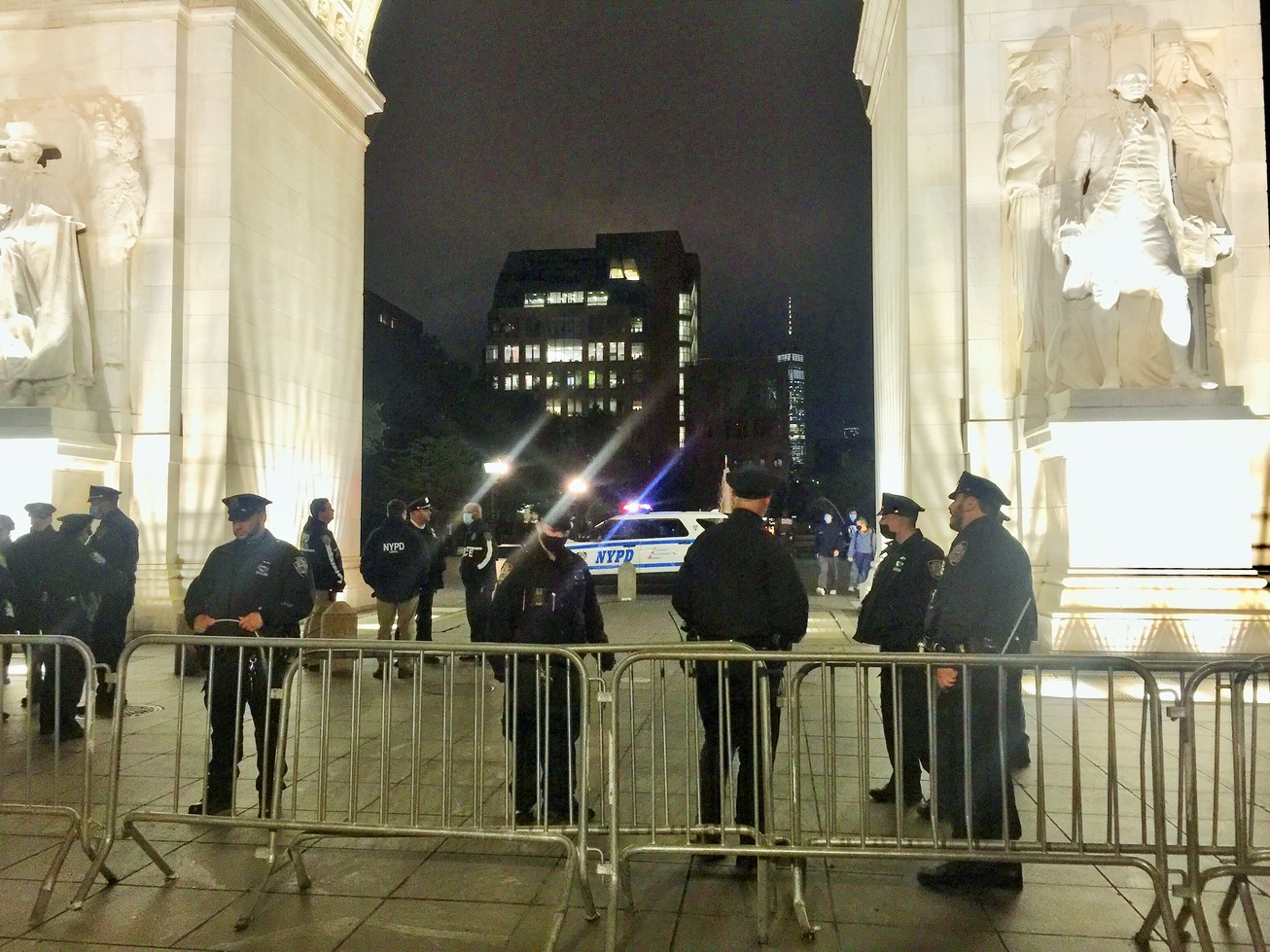 Police enforcing the curfew in Washington Square Park on May 31. (Photo by Sharon Woolums)

BY THE VILLAGE SUN | The Shaman is not going to like this — but many local residents really will.

The Village Sun has learned that police are reportedly set to finally start enforcing the longstanding midnight curfew at Washington Square Park.

Word is that they decided to wait until after the Gay Pride March weekend is over to start the enforcement.

A reliable source, who is close to the New York Police Department and a neighbor of Greenwich Village’s Sixth Precinct, gave the newspaper the exclusive inside scoop. He requested anonymity.

“Starting Monday, the N.Y.P.D. is going to empty out the park at midnight and stay consistent with it,” the source said. “They’re going to bring in as many officers as they need and say, ‘Point your feet in that direction and go.’ They will be asking everyone to leave the park.”

He said he did not know how many police would be involved but that it would definitely be more than a handful.

About a month ago, police started trying to enforce a 10 p.m. weekend curfew, feeling they needed to begin clearing the park earlier if they were actually going to have it empty by midnight. But on the night of Sat., June 5, a group of young parkgoers clashed with police trying to clear the park, resulting in 23 arrests. Since then, cops have backed off and the park has been left open all night long.

Meanwhile, party promoter David Ortiz, 28, a.k.a. “Shaman,” has vowed to keep throwing raves and spreading “free love” in the park every night, saying it’s people’s First Amendment right. He recently branded neighbors who complain about the square’s late-night party scene “Karens” and “Kevins,” adding that, if they don’t like, they should move.

Police reportedly decided to scrap the idea of trying to impose the earlier 10 p.m. curfew.

“They will start at midnight to get everyone out,” the source said. “Police think it shouldn’t take that long to get them all out.”

However, cops might start pulling the plug on electric amps and neon-glowing “party speakers” in the park before then.

“They might be going in earlier on amplification,” he added. “It’s against park rules.”

The police press department did not immediately respond to a request to confirm or deny if the park’s curfew enforcement would start Monday.

The source said he believed an announcement about it would be coming out sometime soon.

The park revelers praise what they call a special late-night scene that has developed in the space. One group hands out free food and water and does its best to pick up trash left from the nocturnal fun.

But, unfortunately, it has not been all peace, love and dancing. Early last Saturday around 12:40 a.m. a woman was trampled and left bleeding from her head after a man waving a Taser and armed with a large knife caused the crowd to panic and stampede. According to a video, at some point during the chaos, the guy with the Taser, Jason McDermott, 42, was smashed over the head with a glass bottle. McDermott was arrested and then promptly released without bail.