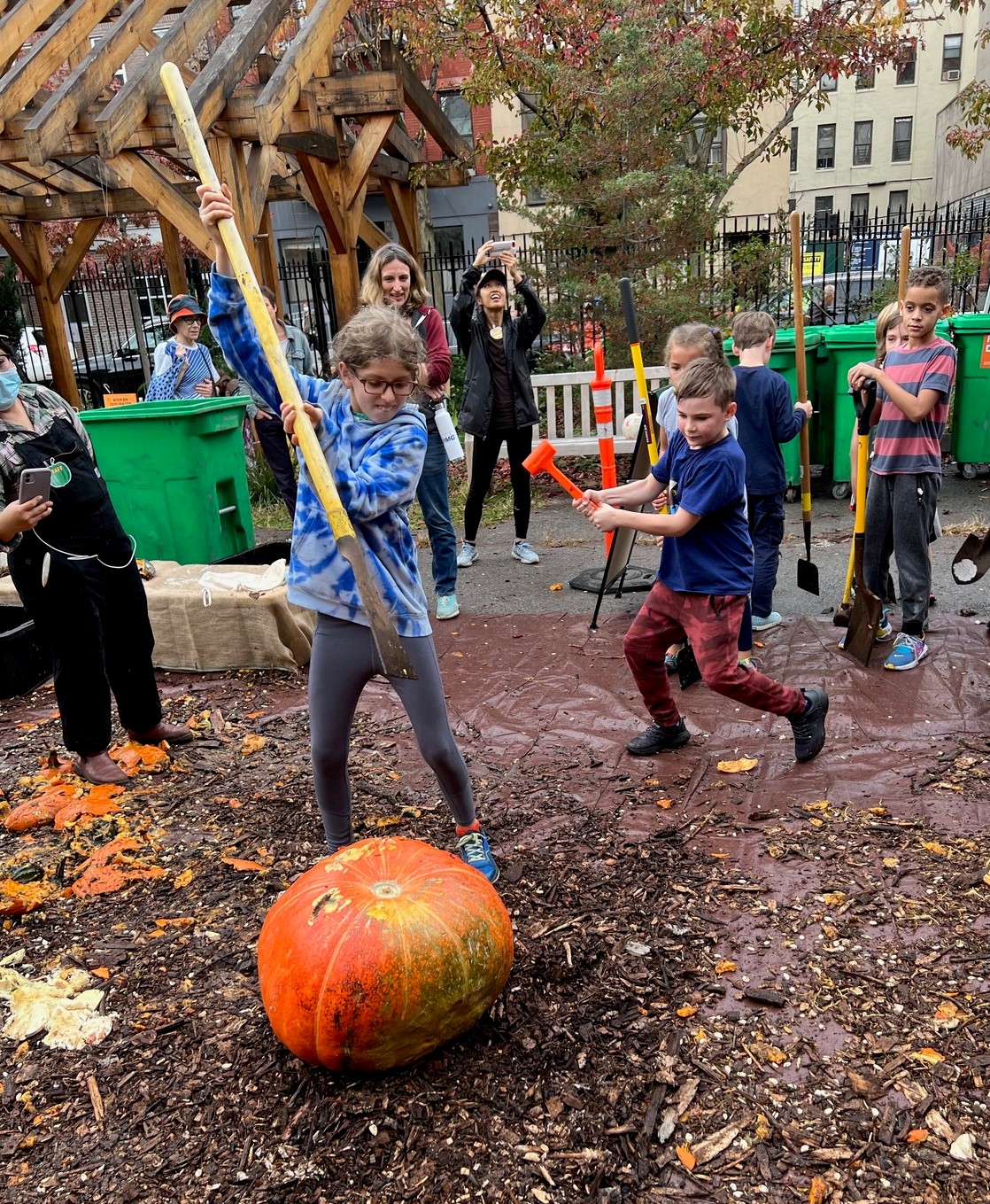 Kids got out their energy by pulverizing the pumpkins. (Photo by Bonnie Rosenstock)

Smashing pumpkins in the East Village for community and compost

BY BONNIE ROSENSTOCK | On Sun., Nov. 6, La Plaza Cultural de Armando Perez, on E. Ninth Street between Avenues B and C, was the scene of the great pumpkin massacre, for the purpose of compost collection.

The Lower East Side community was invited to contribute their own pumpkins, jack-o’-lanterns and gourds for the smashup. People of all ages (but especially children) wielded sledgehammers, shovels, hoes and other tools of mass destruction to pulverize the pumpkins.

Each pumpkin was counted and weighed beforehand by volunteers from the city’s Department of Sanitation. Free pastries made with pumpkin and hot apple cider were available, as well as prizes and cooking and composting demonstrations.

The hacking hoedown’s highlight was a 70-pound pumpkin, donated by Van Houten Farms in Orangeburg, NY, a vendor at the Union Square Greenmarket, which gave the participants a particular challenge, one swing at a time until the massive fruit finally succumbed to the team effort.

Afterward, the overflowing bins of crushed and mashed pumpkins were sent to the Fresh Kills Compost Facility, located in the former Freshkills landfill in western Staten Island. The landfill was closed in 2001, and construction began on the new 2,200-acre Fresh Kills Park in 2008, with an environmental focus.

In the spring, or sometime during the growing season, the composted pumpkins will be returned to community gardens, parks and other green spaces to nourish their plantings. The program was created by The NYC Compost Project and carried out by staff funded by the Department of Sanitation and hosted by partner organizations in each borough. In this case, the host organization was the Lower East Side Ecology Center.

According to the ecology center, 190 pumpkins were smashed at the La Plaza event, totaling more than 1,200 pounds of compost material.

To learn how to compost, visit nyc.gov/mastercomposter.