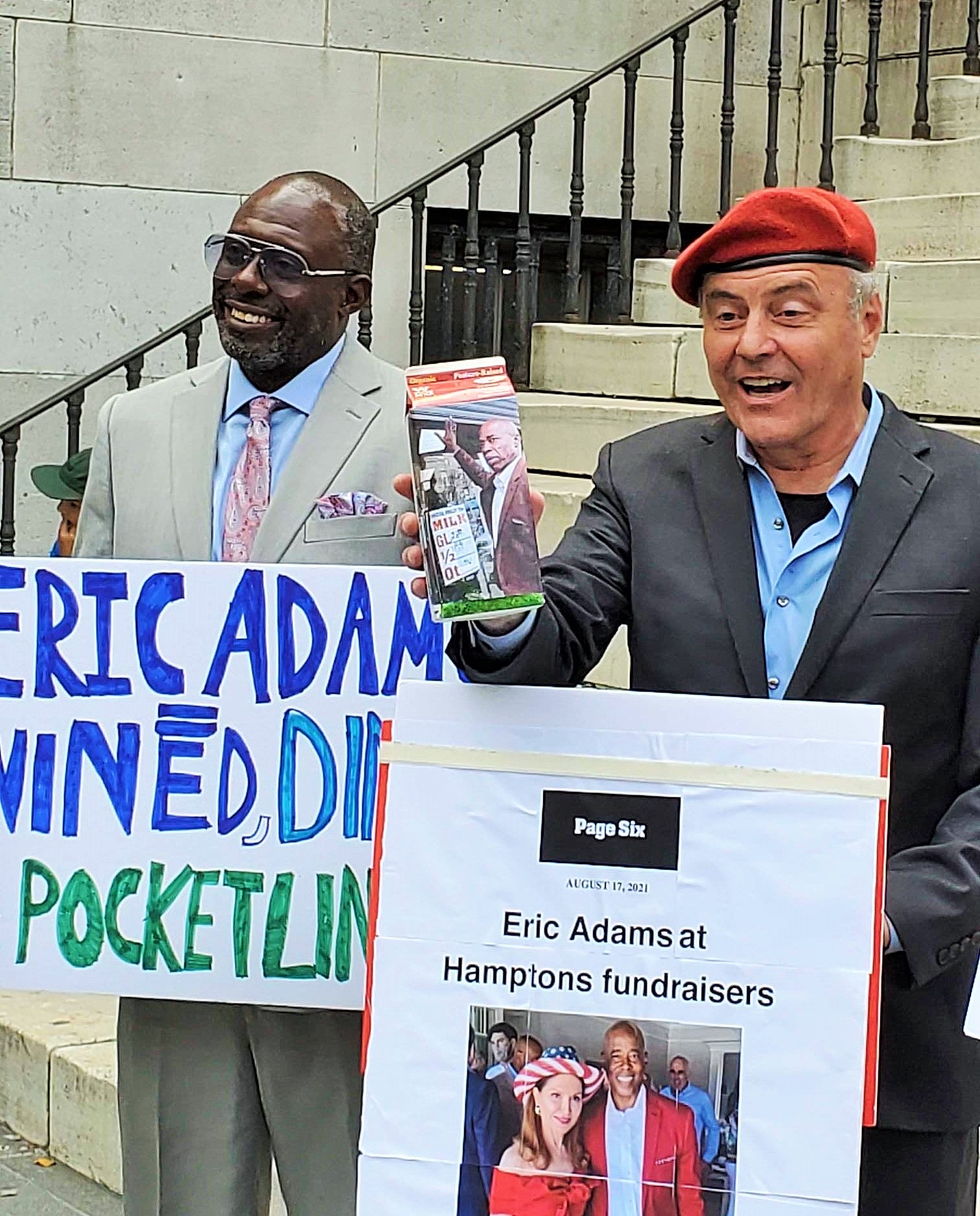 Holding up a "missing-children milk carton," Curtis Sliwa bashed Eric Adams for being in the Hamptons as Brooklyn was beset by gun violence. (Photo by The Village Sun)

BY LINCOLN ANDERSON | Holding up a milk carton with a photo of Eric Adams on it, Republican mayoral candidate Curtis Sliwa asked where his Democratic rival has been while Brooklyn was being wracked by shootings over the weekend.

The Village Sun happened to be passing by Brooklyn Borough Hall on Tuesday afternoon and noticed a group of Guardian Angels in their red berets and T-shirts, and discovered that Sliwa would be holding a press conference.

According to police, between Friday and Sunday there were 35 victims shot in 24 incidents in the city, most of them happening in Brooklyn, where Adams is the borough president.

On Monday, the New York Post’s Page Six reported that Adams was at a fundraiser in the Hamptons on Sunday that was hosted by G.O.P. billionaire John Catsimatidis, among others.

Fresh off his Hamptons jaunt, Adams is now taking a weeklong vacation in Europe.

Sliwa charged that all that Adams has been doing about the violence while out of town is posting on social media.

“He ain’t dealing with the shootings, he’s tweeting about it,” he accused.

Meanwhile, Sliwa declared that he, in fact, is the true “candidate of the streets” and mocked Adams for noshing on hors d’oeuvres with the “trendoids and freakazoids” on the East End.

“Eric Adams says he’s the blue-collar candidate for mayor,” he said. “Ha! Doesn’t look to blue collar to me… . I ask the question, where is Eric Adams? It’s like ‘Where’s Waldo?’

“After all the recent shootings in Brooklyn, where is Eric? In the Hamptons. … Now they say he’s ‘out of the country.'”

Sliwa also noted that he is supporting city Department of Correction officers, who complain they are getting assaulted by inmates but that the attackers face scant consequences.

“Eric Adams supports the closing of Rikers Island,” he said. “I do not.”

Sliwa accused Adams of being “de Blasio 2.0,” including on police issues. Although Adams pitched himself as the law-and-order candidate during the primary election, Sliwa said the Democratic nominee advocated for police reform during the George Floyd protests, but now talks of refunding the police with stimulus cash from the Biden administration.

“Last year…during the rioting and looting, he was [for] reform,” Sliwa said. “Now he’s [for] refund.”

Sliwa said the fact that Adams, a former cop, carries a firearm sets a bad example for combatting gun violence.

A few times during his remarks, however, Sliwa offered Adams advice if he were to win the mayoral general election in November. Adams is seen as the prohibitive favorite in heavily Democratic New York City.

But at another point he mocked Adams for allegedly having a “10-year plan” to become president, which was mentioned in the Page Six Hamptons item.

Speaking to The Village Sun before the press conference, Sliwa highlighted an issue that sets him apart from his opponent: He backs no-kill animal shelters in New York City.

Sliwa noted that he lives in a small 328-square-foot apartment on the Upper West Side with his wife, animal advocate Nancy Regula, and 16 rescue cats.

“I’m a huge supporter of no-kill shelters,” he said, adding that the Big Apple should follow the model of Austin, Texas, which is a leader on the issue.

Instead of euthanizing cats and dogs, he said, the city should farm the unwanted pets out to people to foster or adopt them. He backs the novel idea of a “SNAP pet card” that — like food stamps for pets — could only be used to buy pet food and supplies. The card would come loaded with $1,000 for one year.

Asked if people would abuse SNAP pet cards, he shrugged, “There’s always going to be some abuse.”