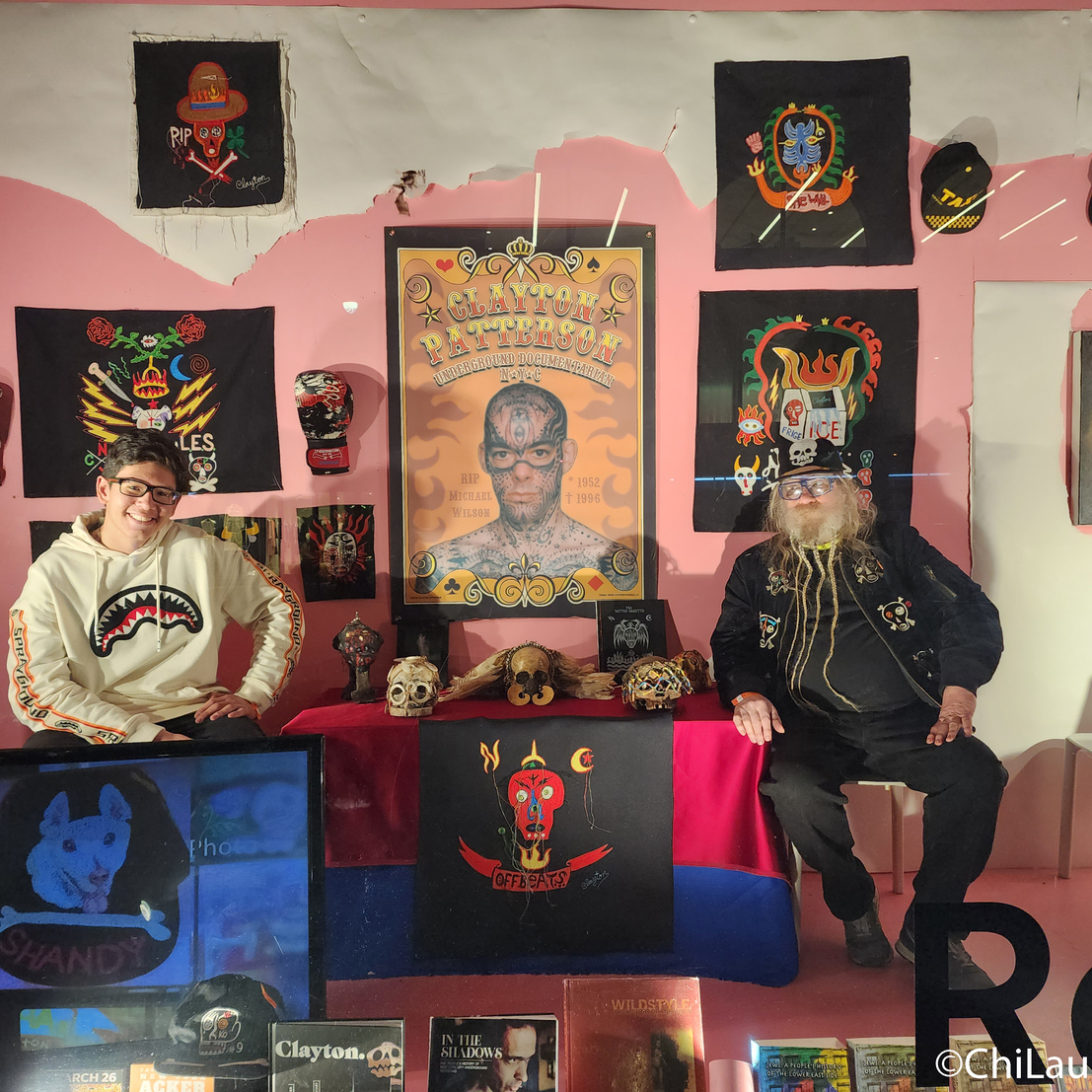 For one day in December — thanks to Rob Cristofaro, the founder of Alife, the Rivington Street streetwear store, who hooked it all up — Lower East Side documentarian Clayton Patterson had the chance to decorate a Louis Vuitton pop-up window in the former Barney’s store space at 61st Street and Madison Avenue. His partner in the project was Zachary Lau, 14, an aspiring photographer whom Patterson and local shutterbug Destiny Matta are mentoring. Added into the window’s mix were skulls that Zachary and his father, Chi Lau, collect.

BY ZACHARY LAU | My mother loves Louis Vuitton. My father and I collect skulls. On the surface, these two ideas appear to be incongruent. However, with Clayton Patterson’s display at Louis Vuittton the two worlds merged. And that is the hallmark of a great artist and curator, isn’t it? To take two separate ideas and join them in a delightful way.

When my father and I arrived at the window, I noticed the perfectly painted pink walls with flawless white paper perfectly tacked on. Clayton, with his immense experience with aesthetics, decided to partially tear it down and create jagged edges. I walked outside to the staging area and started loading Clayton’s embroideries, art, books and sculptures. Along with these items I brought in three skulls from our private collection, a large white column, a small white cube and a red, blue, black and brown cloth. I handed the embroideries to Clayton’s friend and set designer Ed and we got to work.

Clayton and my father draped the red and blue cloth over the column.  I placed the three skulls on the side of the pillar and Clayton distributed the sculptures among them. Shortly after setting up the column, we began to arrange the display on the cube. We draped the brown cloth over it and put up Clayton’s set of hats. Along with these items we added a photo of Clayton and Elsa. Another lesson learned about loving people.

On some level, I did not know how this would all come together and how it would be received by the intended audience. Clayton is a self-described “maximalist.” He included EVERYTHING in this display. He had multiple posters about tattoos, embroideries with tribal themes, books about gangs and our skulls. Among the clean-lined, minimalist displays, our jagged-lined “maximalist” display appeared organic and unique and it was honest. It’s honest because this is a display window into Clayton’s creative heart and soul.

I didn’t realize it at the time, but the display window was Clayton Patterson and Clayton Patterson embodied the Lower East Side. The Lower East Side is tenement buildings, cheap food, immigrants and graffiti. It’s dirty, gritty and at times dangerous. However, it is also bubbling with creativity, beauty and soul. In contrast, Madison Avenue is clean, pretty and sterile. It is made up of sets of orderly parallel lines that never cross each other. With tribal skulls, designed chaos and his scraggly beard, Clayton brought Essex Street to Madison Avenue.