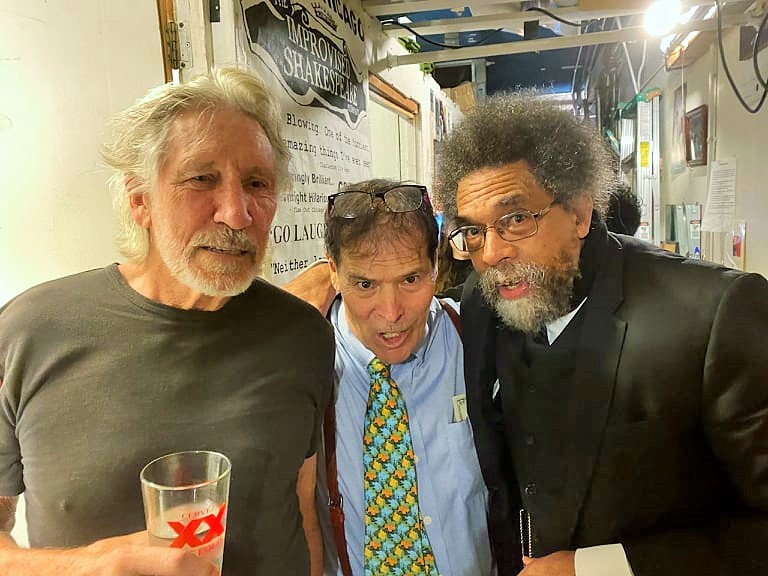 From left, Roger Waters, Randy Credico and Cornel West were headliners at the "Stand-ups for Assange" benefit at Theatre 80. (Courtesy Randy Credico)

Shticking it to the man at Julian Assange defense fundraiser

BY LINCOLN ANDERSON | Julian Assange continues to be held in a London maximum-security prison while the U.S. tries to extradite him to stand trial on conspiracy, espionage and hacking charges.

Meanwhile last month in the East Village, Randy Credico — a comic-turned-candidate-turned-radio show journalist who has championed the Wikileaks founder’s cause — held a “Stand-up for Assange” benefit for his legal defense.

On the bill were Credico himself, along with a lineup of fellow comics, rock icon Rogers Waters of Pink Floyd and Cornel West, the activist philosopher. Playing jazz piano was Raffi D’Lugoff.

In his opening monologue, Credico quipped that the evening was “an intimate audience of 75 — plus 14 F.B.I., N.S.A. and C.I.A. officers.”

He recalled his early career, when it became clear his political shtick was too hot to handle for some. A bit he performed in 1984 on Johnny Carson’s “The Tonight Show” got him blackballed from reappearing.

“I said, ‘You look at Jeanne Kirkpatrick. You have to ask yourself if Eva Braun really died in that bunker in 1945.’ … Such a light joke… .”

Nowadays, Credico hosts a radio show on WBAI and does the “Assange Countdown to Freedom” podcast. He also briefly ran for mayor in the recent election, with freeing Assange being one of his key campaign issues.

He noted of pianist D’Lugoff that his father, Art D’Lugoff, owned The Village Gate, “the most radical nightclub owner in the history of this city.”

At the show’s start, a guy on the sidewalk in front of the theater was ranting and raving, it wasn’t exactly clear about what. Some people in the audience said they had seen him around at a recent protest, though acting normally.

“That’s the reason I don’t do LSD,” Credico quipped of the yeller, wondering if he should invite him in and give him the microphone.

On top of that, the technician was having trouble getting the livestream to work.

“What, are we raising the Titanic tonight?” Credio lamented. As the numbers of people watching the livestream started to creep up, he quipped it was likely just more security-state spooks.

During a brief lull in the action, he pivoted to a smattering of rapid-fire impressions…James Mason, Walter Matthau, George C. Scott.

Waters, 78, told a bawdy medical joke, then noted that stand-up comedy was a whole new experience for him.

The Pink Floyd leader called Assange’s incarceration a travesty and the United States “a child-killing behemoth.”

In what he said was a first for him, he then sang an original song while accompanying himself on the piano. The tune kept circling back to the theme of a “choir.”

“This is where the choir lives,” he explained. “It’s in the f—in’ bar. And it’s great that we’re all here and making a little noise tonight.”

Speaking of the bar, Lorcan Otway, the owner of Theatre 80, is currently trying to transfer the liquor license from the place’s William Barnacle Tavern to the Theatre 80 performance venue — which he retrofitted as a cabaret during the pandemic — so alcohol can be served there. But, as of now, the actual bar is the only place where alcohol can be dispensed on the premises.

Although Waters has been vilified for being an Israel boycott backer, on this night he made no mention of the Jewish state.

West praised Waters’s performance, saying, “It was the blues at the deepest level. … Pink Floyd,” he predicted, “will go down as one of the greatest enactments of truth and beauty of the 20th century.”

West said governments fear the Wikileaks publisher because he has exposed “lies that reveal crimes. And no predatory capitalist regime wants to hear the lies exposed. That’s why he’s in jail,” he accused, “because he’s a truth-teller.”

Kunstler said she was “newly optimistic” about Assange’s case, noting how the English barrister on it had recently ruled against his extradition.

In 2016, she introduced Credico to Assange.

“Then a year later, Roger Stone came up,” she noted. “He’s not a dumb guy, he’s just a creep, a horrible guy.”

Due to statements he made, Stone was linked to the Wikileaks dump of Democratic National Committee e-mails before the 2016 presidential election. That, in turn, put Credico, a “frenemy” of Stone who had interviewed Assange, under the microscope. Credico was accused of being Stone’s “back channel” connection to Assange. Meanwhile, Stone was hit with multiple federal charges, including making false statements and witness tampering, including for trying to influence Credico’s testimony. He was convicted but Trump later commuted his sentence.

Kunstler scoffed, “That Julian would tell either me or Randy what his plans are is absurd. But he certainly wouldn’t tell Roger Stone. … They said Randy Credico was the guy who put it together. He can’t even do e-mail.”

“Julian Assange never got anything wrong,” comic Lee Camp declared, contrasting that with the mainstream media’s misleading narratives on Russiagate and Iraqi weapons of mass destruction.

“The corporate media work in lockstep with the state,” Camp charged. “No, [Assange] didn’t give anything to Russia. No, nothing was hacked. … Everyone who believes in journalism should be on Assange’s side. Julian Assange must be defended because the elites want him locked up.”

Speaking toward the Assange benefit’s end, Otway said it had truly been a night for the ages for the Theatre 80 room. He ranked it right up there with when comedian Lord Buckley was arrested for marijuana and when a fundraiser was held there for civil-rights attorney Lynne Stewart when she was fighting federal charges of aiding terrorists.