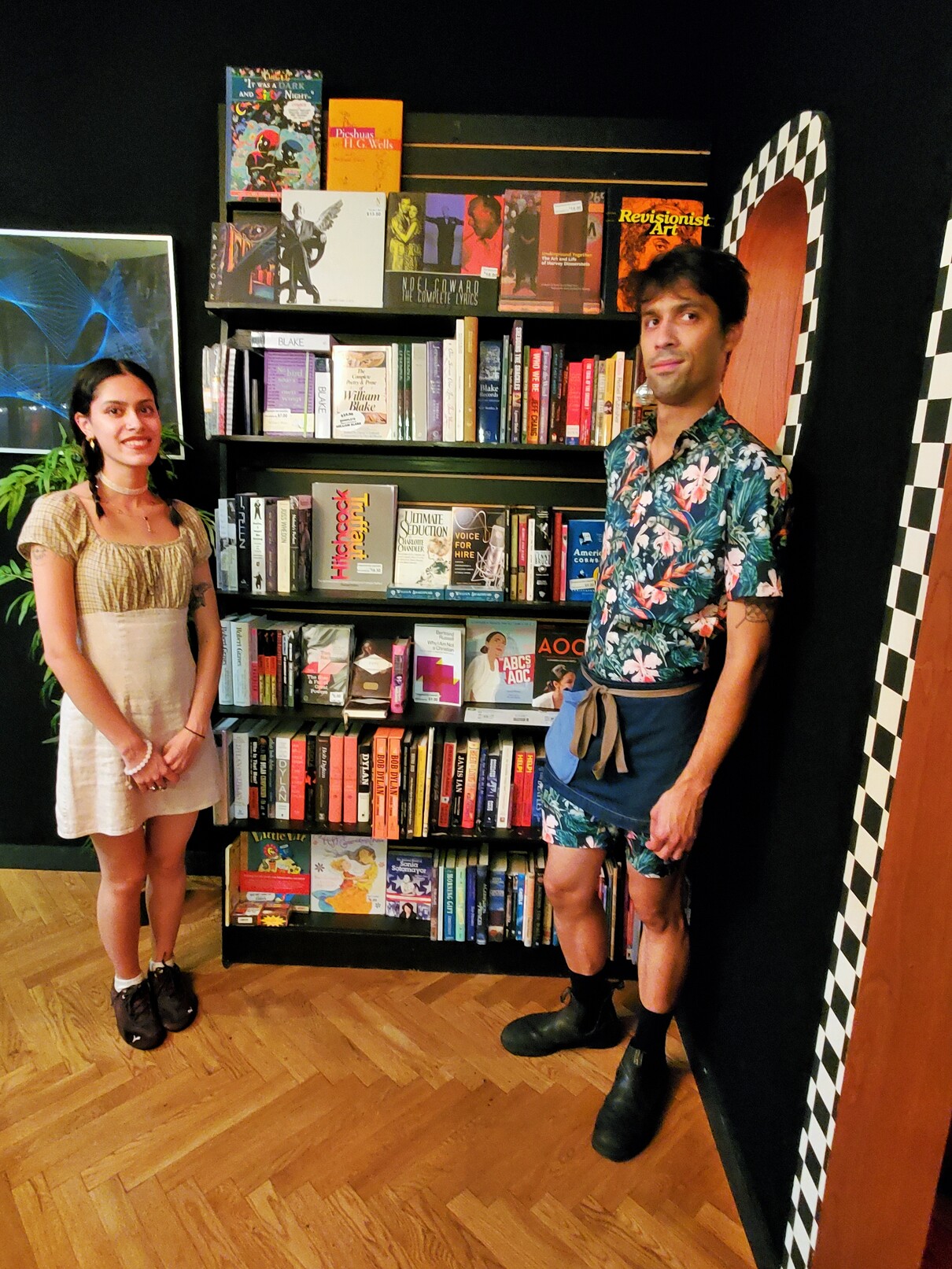 Natalia Ortiz and Esteban Ortiz, no relation, employees at Temperance Wine Bar, flank one of Jim Drougas's bookshelf units inside the bar's private tasting room. (Photo by The Village Sun)

BY LINCOLN ANDERSON | In vino veritas is taking on a new meaning on Carmine Street — or at least in one bar, that is.

After running a left-wing bookstore in Greenwich Village for more than 30 years before having to vacate it at the end of last month, James Drougas’s fans and loyal customers hoped that he would pop up somewhere soon.

He has — right next door, as a matter of fact — in an unexpected pop-up location.

Drougas now has two shelving units full of books in the private tasting room at the eastern end of Temperance Wine Bar, at 40 Carmine St. — literally, right next to where his Unoppressive Non-Imperialist Bargain Books used to be. The tomes on display might appear to be a smaller selection than what his, admittedly, also small store formerly held. But there are more than 300 of them, and their presence keeps the Unoppressive spirit alive, with books about Alexandria Ocasio-Cortez, volumes by Alan Watts on Zen and religion, collections of William Blake’s prose and poetry and biographies of renowned filmmakers and movie actors.

Jonathan Rexroat, cofounder of Rexford Hospitality Group and the wine bar’s operator, has made the space available to Drougas.

The bookseller is calling it his “summer pop-up.” A sign in the former bookstore’s window now directs people to “stop by” the wine shop to find reading material.

The book nook is open Tuesday through Sunday, excluding days with private events at the wine bar.

Vintage photos wallpapering one side of the room pay homage to 1970s and ’80s New York City, including the punk rock scene. A cool-looking Rexroat himself is in one of the photos.

In addition, there will be two tables of books outside on the sidewalk “sporadically,” Drougas said. He plans to man the tables personally this coming weekend.

Last Saturday night no one was staffing the bookshelves per se. However, Natalia Ortiz, a bar employee, said she keeps an eye on them. But in self-serve style, people can buy a book there any time the bar is open via Venmo, PayPal and Cash App.

Meanwhile, the longtime Village merchant continues to search for a new, long-term home for his store. A space on E. Ninth Street that he hoped would work turned out to be a “no-go,” he said.

Basically, other possibilities for a new bookstore space are “on the wind still,” he said.

As for Temperance Wine Bar, it’s boasts more than 100 wines, including flavorful Spanish and Portuguese varietals, plus tasty tapas, including the likes of house-cured sardines and buttered bruschetta, a heaping shaved Brussels sprout salad and duck meatballs with marinara sauce, to name just a few.

Not only has the bar provided shelf space to Drougas, it’s even created a signature drink in his honor — dubbed, fittingly, the Unoppressive Non-Imperialist.

Temperance Wine Bar will be celebrating its one-year anniversary on July 21.