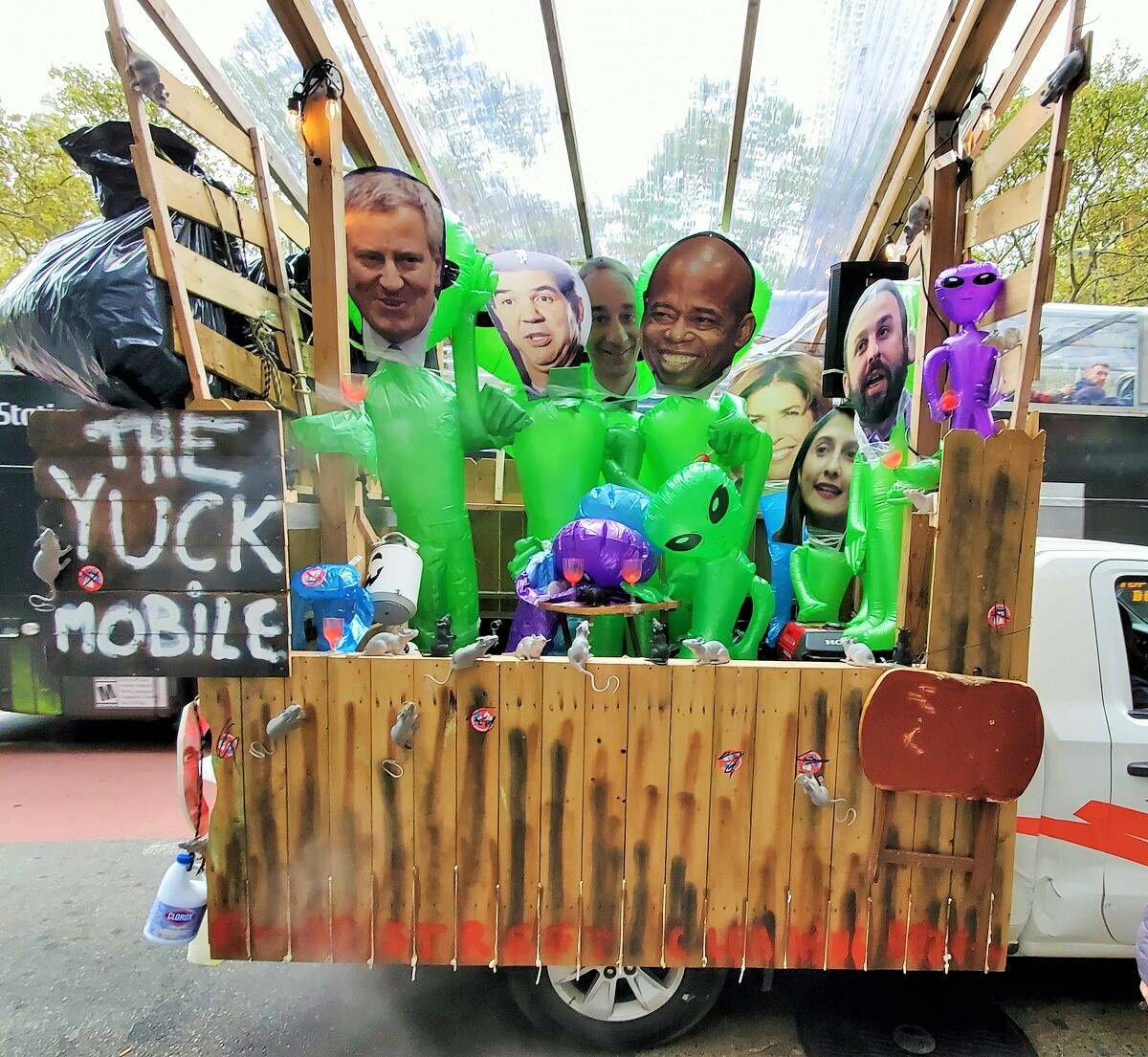 Scores of beleaguered residents — from Greenwich Village to the East Village to Williamsburg — descended on Broadway at Murray Street, outside the New York City Council offices on Nov. 15, to demand an end to the city’s pandemic-emergency outdoor dining program. Specifically, they inveighed that there should be no “closed-door deals” on Open Restaurants.

Dripping with life-size plastic rats and trash bags, the Yuckmobile sported a dining party of Mayor Adams, former Mayor de Blasio, key councilmembers and Andrew Rigie, the head of the New York City Hospitality Alliance. It blared a cacophony of noise but police said to turn it off — which is easier said than done when the noise is coming from a real dining shed.

The rally was organized by the ad hoc group CUEUP, some of whose members are party to two lawsuits that have been lodged against the Open Restaurants program.

The Council has been working on a bill to make the program — which has cluttered city streets with tens of thousands of often-ramshackle sheds — permanent. However, critics slam the shacks as “rat hotels” and say they block the streets and sidewalks, cause noise and trash, and turn nightlife-heavy areas like Downtown Manhattan into a constant Mardi Gras.

Obviously, bar and restaurant operators love that the program has increased their business. Sheds that were supposed to be kept partly open for air circulation during COVID are now increasingly becoming closed, bunker-like structures. The Council may ultimately want to shed the sheds, but not the whole outdoor program.

To opponents’ anger, the Council does not plan to hold a public hearing on the bill’s final version, though one was held when the bill was first introduced. Word was that the final vote would be sometime in November. Shed foes feared it would be within days, on Nov. 22.

However, Councilmember Christopher Marte, who represents Lower Manhattan’s District 1, happened to be at another nearby rally and dropped by the protest to assuage their worry.

“There’s a reason that we’re not voting this week on this legislation,” he said. “That’s because you guys keep on pushing! I’m here and I’m going to be here until we get the legislation that shuts the sheds and gives us our neighborhoods back!”

Stu Waldman, 81, who lives on Bedford Street and is an outspoken shed hater, was one of the event’s organizers.

“From the beginning,” he said, “not only have we not been listened to, we’ve been lied to, again and again and again. We asked for an E.I.S. [environmental impact study]. … For the city to say, ‘So, we haven’t got an E.I.S.,’ to say there’s no serious impacts…it’s really gaslighting. How can they say that with a straight face? They have to find out what the impacts are.”

However, Waldman said, so far it’s been “whatever the restaurant industry wants, they get.”

Shannon Phipps, a mother of a young child, from Williamsburg, said a big coffee shop chain just erected a new shed on her block right in time for winter.

“I didn’t become an activist till Open Streets,” she said, referring to the program that pedestrianizes certain streets at certain hours. “We were basically sheltering in place and we saw how it quickly morphed into an occupation.”

“The sheds have been a boon to the rat population,” she said. “And they’re decimating the gardens. The rats are eating more food. They’re making more babies. I’m a reproductive biologist — that’s how it works. I mean, the rats are eating clams and mussels.”

Allie Ryan, an East Village activist who is running for City Council, said, “People are voicing their discontent about this program, but elected officials, city councilmembers are pushing this forward. What do we have to do to get them to hear us? I think there should be a voter referendum.”