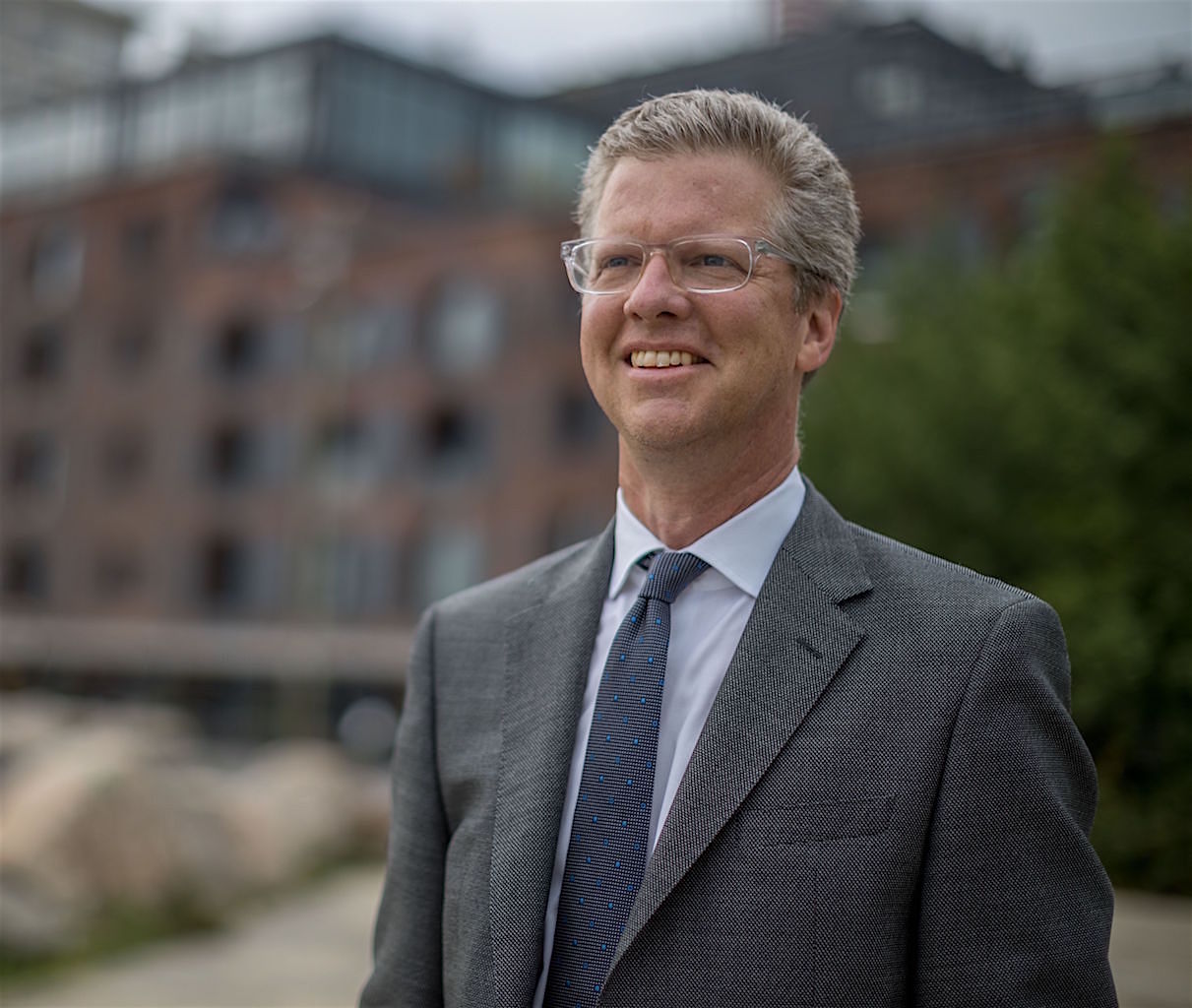 BY LINCOLN ANDERSON | Shaun Donovan and opponents of the East Side Coastal Resiliency project definitely share one feeling in common about the embattled scheme: “deep frustration.”

That’s how the Democratic mayoral candidate said he felt when the de Blasio administration went silent on a relatively low-impact resiliency plan for East River Park, only to eventually replace it, out of the blue, with a different scenario. Under the new plan, which the city is currently hoping to put into effect, the 2.4-mile-long park would be elevated from between 8 feet to 10 feet and then totally rebuilt from scratch.

For Donovan, the frustration was personal because he actually created the Rebuild By Design process that spawned the resiliency plan’s first incarnation. At the time, he was the secretary of the U.S. Department of Housing and Urban Development and President Obama had also appointed him the head of the Hurricane Sandy recovery effort.

Rebuild By Design, an international design competition, has since been championed by the Rockefeller Foundation, which has made it part of its global 100 Resilient Cities effort.

That first East Side resiliency plan generally enjoyed community buy-in, though some park activists also wanted it to include decking over part of the F.D.R. Drive. But extensive community input into the design went all for nought when City Hall unilaterally decided to switch to the “elevated park” plan.

“That was part of my deep frustration when the plan was being held for years,” Donovan told The Village Sun in a recent interview. “I was deeply passionate about [the original] plan and deeply frustrated that all the work I did to make it possible was bypassed.”

As for why the original plan fell into a black hole, only later to be replaced, Donovan said, “From how I understand it, the city couldn’t get its different agencies that needed to work on it to agree. It was lack of coordination by the de Blasio administration that we’ve seen on homelessness and other issues. I think it’s central to why we have the worst homeless crisis since the Great Depression. For homelessness, you need every agency across the table.”

Speaking at a Zoom event last month with leaders of the city’s arts, entertainment and hospitality industries, Donovan said that, when he was HUD secretary, the Obama administration successfully tackled veterans’ homelessness nationwide.

“We ended veteran homelessness, not reduced it, ended it,” he said. “That can happen here.”

Indeed, amid the crowded field of candidates, Donovan is seen as someone who would be a skilled manager of the city. He has that kind of experience. He started out as the commissioner of the city’s Department of Housing Preservation and Development, then joined the Obama administration. After running HUD, he was appointed director of the Office of Management and Budget, overseeing the president’s $4 trillion budget proposal to Congress.

Asked how he would address the contentious situation with East River Park if he were mayor, Donovan said he would take the same approach he did during the Rebuild By Design process.

“The first thing I would do is exactly what I would do as HUD secretary — hear the views, look at options,” he said, “put the vision of the community first.”

Asked, were he elected, if he would put the brakes on the coastal resiliency project, he said, “We’d have to look at exactly where the park is in January 2022.” But he later added, “It is absolutely a possibility. And I would make sure we went back to the plan, back to the community and reevaluate.”

“More than fine,” he said. “It was the result of thousands of hours of community meetings, visioning sessions. This is what real community-based planning looks like. I spent a career — 30 years — learning about what it means to put the people back in planning and that is the strategy I have led with my entire career.”

Donovan said this approach means the difference between a park project “that’s going to happen to your community or with and for the community.”

“Too often city agencies disappear with a plan into a black box and come back with a plan that doesn’t reflect the will of the community,” he said.

On that note, asked his position on Intro 2186, the long-range comprehensive planning bill, Donovan said he generally does support the concept. Opponents, though, object that the bill calls for the creation of a “director” who would impose a plan on any community board district where the City Council balked at picking one.

“I do believe we need more comprehensive planning for the future of the city,” he asserted. “For too long we’ve had a ‘Department of Zoning’ rather than a Department of Planning. And I do believe that every community needs to do its fair share to meet the needs of New Yorkers.

“But I would pair that comprehensive planning with much earlier and deeper community engagement,” he said, “like the way I did with Rebuild By Design.

“We shouldn’t just rezone low-income black and brown communities,” he added. “We should make sure we have a balanced approach.”

Planners pushing to unloose an upzoning on Soho and Noho, for example, argue that the neighborhoods are majority white.

Donovan stressed, “There is no one-size-fits-all solution.” He said he has been heavily influenced by legendary urban planner Jane Jacobs, who, of course, lived in Greenwich Village.

He was referring to how the West Village Houses’ former owner wanted to take them out of the Mitchell-Lama affordable-housing program in the early 2000s and turn them market rate. A deal was brokered where most existing tenants could buy their units while others could continue to rent.

Donovan backs the idea of “15-minute neighborhoods,” meaning residents should not be further than 15 minutes away from everything they need, such as stores, parks and transportation.

On the subject of Mayor de Blasio’s contentious Soho/Noho rezoning, Donovan did not make a blanket statement against upzonings in historic districts.

“Real community-based and -oriented planning means figuring out where adding density makes sense and where it doesn’t,” he said, adding that avenues, which are wider, are usually the places to add housing and development.

“We have historic districts for a reason,” he noted, “height and density and character. And so I do have concerns about upzoning districts. I’m not saying that there’s no way we can find any way to build in Manhattan.”

Queried about whether he would support the Small Business Jobs Survival Act, Donovan did not say yes, but answered, “We need to be doing much more to support our local small businesses.”

He said a concern about proposals he has seen to help small businesses, such as commercial rent regulation, is that there needs to be assurance that “those businesses that need the support are the ones getting the help,” as opposed to bigger companies that do not need this kind of assistance.

During the March 11 Zoom session with arts and hospitality leaders, influential restaurateur Danny Meyer asked Donovan what can be done to help local businesses.

“Even before COVID, the cost of doing business was so high,” Meyer said. “Cities people love going to, like Paris, have a bookstore or bistro that’s been there 60 years, a vitality that New York has but could lose.” In short, Meyer, asked what Donovan would do to “crack the crisis of real estate.”

The mayoral contender acknowledged “the damage that’s been done by COVID,” but noted, “the crisis was there before COVID.” Gotham is currently faced with the problem of “the shrinking of the city,” as he put it. He offered the idea of pop-up performances to revitalize vacant ground-floor commercial spaces and low-interest loans.

However, he said, “I don’t know if I would go as far as to implement commercial rent control in the city.”

On the Big Apple’s new outdoor dining program that has been in effect during the pandemic, Donovan indicated that he basically supports it — yet thinks it should not have taken a pandemic to make it happen.

“We’re a 21st-century city with 20th-century streets,” he said. “This isn’t just, for me, about outdoor dining but antiquated trash collection, overflowing trash baskets, the lack of protected [bike] lanes…the use of streets and parking, curbsides. All of that needs real leadership and a mayor who understands innovative solutions to bring our streets and sidewalks into the 21st century. What should have happened is our mayor should have started that planning as soon as he was elected. Instead this was a knee-jerk reaction to a moment of crisis that laid bare the lack of true community-based planning that the city should have been doing.

“I do believe there is a way to ‘open restaurants’ and allow them to use our streets permanently,” he added. “I do believe that the life and joy that we’ve seen on our streets at a time when we really needed it can be made permanent…without noise, without impairing seniors. …”

As for the 14th St. busway, he said he’s hearing good things. Yet, he said, he understands that not all in the community were on board with the plan, only to see the mayor fast-track making it permanent.

“What I have heard from most of my friends and people who live in the neighborhood, I’ve generally heard a positive response,” he said of the novel transit initiative. “But that’s not an excuse for making changes to the community, as opposed to with and for the community.”

As for how he can set himself apart in a crowded field of mayoral candidates, Donovan said: experience and vision.

“I’ve set myself apart in three ways,” he said. “Nobody in this race has the deep experience in crisis, the bold, comprehensive ideas for our city, and the experience at all levels of government to put these ideas into reality. People want change but they also definitely want experience. They don’t want a novice at this point.

“I am a public servant not a politician,” he proudly said, “and I’ve been called by President Obama and now-President Biden to serve in face of crisis over and over again.”

Donovan’s campaign recently had a crisis itself a week ago when he initially did not quality for matching funds from the city’s Campaign Finance Board. But the C.F.B. subsequently reversed itself and approved $1.5 million in matching funds for his campaign.