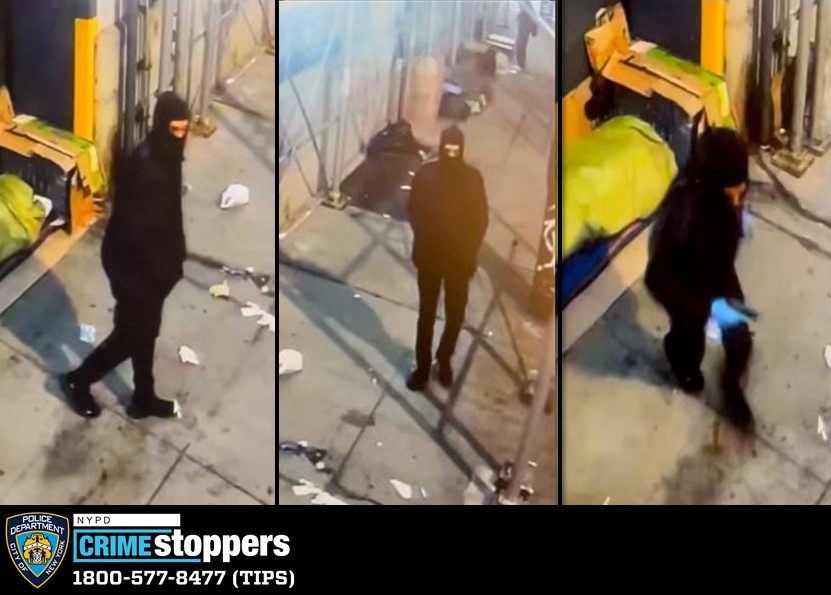 Surveillance camera images of the shooter who killed a sleeping homeless man in Soho at Lafayette and Howard Streets early on the morning of Sat., March 12. (Courtesy N.Y.P.D.)

BY THE VILLAGE SUN | Police are trying to catch a killer who has slain at least two and possibly three homeless men on the streets of both Downtown Manhattan and Washington, D.C., over the past two weeks. The suspect has also wounded at least three other homeless men who survived.

A total of $55,000 in reward money is being offered for the wanted man.

Commissioner Keechant Sewell of the New York Police Department and Chief Robert Contee of the Metropolitan Police Department announced that the several shootings in the two cities were committed by the same suspect. The two departments are teaming up on the investigations, along with the federal Bureau of Alcohol, Tobacco, Firearms and Explosives.

In New York City, two homeless men were shot — one fatally — while they slept on the street in the early morning hours of Sat., March 12.

Also, late on Sun., March 13 — shortly after police had issued a statement on the series of homeless shootings — police announced another homeless man had been found dead on the street earlier that day, at Greenwich and Murray Streets in Tribeca, around 6:30 p.m. The New York Post reported the victim had a bloody pelvis wound. The medical examiner will determine the cause of death.

According to police, the first shooting in the pattern occurred Thurs., March 3, around 4 a.m., when D.C. cops responded to the sound of gunfire on New York Avenue. At the scene, officers found a wounded man, who was transported to a local hospital for treatment of non-life-threatening injuries.

On Tues., March 8, around 1:21 a.m., Washington police responded to H Street Northeast after a report of a shooting. Again, they found an adult male with gunshot wounds, who was transported to the hospital with non-life-threatening injuries.

The next day, a few minutes before 3 a.m., a member of the D.C. Metropolitan Police was near New York Avenue Northeast and spotted a tent fire. Firefighters and E.M.S. put out the blaze, after which the remains of a dead adult male were discovered. The D.C. Office of the Chief Medical Examiner determined the man’s death was a homicide from multiple stab and gunshot wounds.

Three days later the killer was in Manhattan, where on Sat., March 12, around 4:30 a.m. he shot a 38-year-old homeless man in the arm as he was sleeping on King Street near Varick Street in Soho, police said.

Later that same day, around 5 p.m., New York police officers responded to a 911 call of an unidentified homeless man with gunshot wounds to the head and neck at 148 Lafayette St., at Howard Street, also in Soho. The victim was pronounced dead at the scene.

Surveillance video of the Lafayette Street incident shows the shooter kicking the man a few times to check if he was awake, looking around to see if anyone was watching, then blasting the helpless victim point-blank. Area witnesses reported hearing shots around 6 a.m.

The suspect is seen in surveillance images from the national capital wearing all-dark clothing, with a shaved head and beard. In the Downtown Manhattan shootings Saturday night, when the weather was frigid, he wore a black balaclava covering most of his face.

Given the similarity in the perpetrator or perpetrators’ M.O. and the circumstances, the New York City and D.C. police and A.T.F. are jointly investigating the incidents.

Mayor Eric Adams and D.C. Mayor Muriel Bowser spoke about the shocking killings, afterward issuing a joint statement in which they guaranteed his capture.

“The work to get this individual off our streets before he hurts or murders another individual is urgent,” the mayors said. “The rise in gun violence has shaken all of us and it is particularly horrible to know that someone is out there deliberately doing harm to an already vulnerable population.

“As our law enforcement agencies work quickly with federal partners to locate the suspect, we are also calling on unsheltered residents to seek shelter. Again, it is heartbreaking and tragic to know that, in addition to all the dangers that unsheltered residents face, we now have a cold-blooded killer on the loose. But we are certain that we will get the suspect off the street and into police custody.”

“Our homeless population is one of our most vulnerable,” said Police Commissioner Sewell, “and an individual praying on them as they sleep is an exceptionally heinous crime. We will use every tool, every technique and every partner to bring the killer to justice.”

“One of these shootings occurred within blocks of our Washington, D.C., headquarters,” A.T.F. Director Marvin Richardson said. “We have used our advanced A.T.F. systems to conduct real-time analysis, backed up by our A.T.F. National Lab in Maryland to expedite the evidence and assist in the investigations in Washington, D.C., and New York City. Our three agencies are one team.”

Anyone who can identify this individual or who has knowledge of these incidents should call the New York Police Department’s Crime Stoppers Hotline at 1-800-577-TIPS (8477) or for Spanish, 1-888-57-PISTA (74782). Tips can also be submitted on the Crime Stoppers Web site at WWW.NYPDCRIMESTOPPERS.COM or on Twitter at @NYPDTips. All tips are strictly confidential.

Anyone who can identify this individual or who has knowledge of these incidents should call police in Washington, D.C., at 202-727-9099 or text the tip to M.P.D.’s anonymous text tip line at 50411. The Metropolitan Police Department is offering a reward of up to $25,000 to anyone who provides information that leads to the arrest and conviction of the person responsible for the incidents.

The A.T.F. Washington Field Division is offering an additional $20,000.