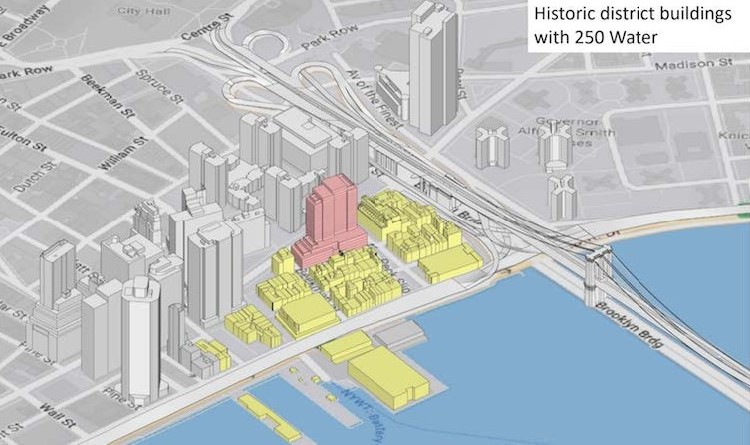 BY THE VILLAGE SUN | Updated Jan. 13, 11:30 p.m.: The Seaport Coalition has won its lawsuit against the New York City Landmarks Preservation Commission for “violating its mandate” in approving the Howard Hughes Corporation’s 250 Water St. tower.

The decision invalidates the project’s certificate of appropriateness and stops construction of a tower inside the low-scale South Street Seaport Historic District.

On Jan. 11, State Supreme Court Judge Arthur Engoron ruled in favor of the Seaport Coalition lawsuit to halt the billion-dollar project which, the plaintiffs argued, would “overwhelm and dominate” the South Street Historic District.

The lawsuit challenged, among other issues, L.P.C. validating the developer’s attempt to link funding for the Seaport Museum to Howard Hughes’s 250 Water St. development. The coalition argued that linking a nonprofit to a for-profit developer is “a tactic often used to provide political cover for City Planning commissioners and electeds to provide community benefits.”

The Landmarks Preservation Law entrusts L.P.C. with the responsibility to preserve historically and architecturally significant buildings and districts that are valuable and important to the city as a whole.

In his ruling, Engoron wrote, “Prior to the Hughes Corp., developers had tried, and failed, to obtain a [certificate of appropriateness] to build high-rise buildings at 250 Water St. Each time, L.P.C. rejected the applications on the ground that the proposed high-rises would relate more closely to the tall buildings outside the district and thus ‘visually confus[e] the present clear boundary of the district.’ In rejecting prior proposals, L.P.C. also stated that the proposed high-rises ‘would dominate and overwhelm the neighboring buildings in the district by virtue of [their] sheer size and boldly geometric massing’ and ‘would cause an abrupt change in scale within the district which would be disruptive of the district’s homogenous quality.'”

The justice agreed with the plaintiffs that allowing the application for the Hughes Corp. tower project to be “consolidated” with that of funding for the cash-strapped Seaport Museum created an “impermissible quid pro quo [that] influenced L.P.C. to consider the potential benefits for the museum in approving the tower, rather than considering the appropriateness of the tower on its own merits.”

In short, Engoron said, L.P.C. “abused” its own mission of preservation by “diverging from prior practice without explaining why, and by pairing two separate applications, one of which promised to provide significant, conditional financial assistance to the…other.

“In the final analysis,” he concluded, “the citizens of New York City are entitled to to feel confident that a controversial, counterintuitive decision to allow a skyscraper to be built in a low-rise historic district…was made solely on the merits, and not because of a quid pro quo, even one with the laudable purpose of museum funding.”

In a press release, the Seaport Coalition said, “If the 250 Water St. approval were to go unchallenged, it would demonstrate to developers that the L.P.C. is now ‘open for business’ to offers of neighborhood amenities in return for a building that is clearly alien to our historically valuable sites and ‘overrides’ historic preservation safeguards embedded in the New York City Landmarks Law.

In a statement, a Howard Hughes spokesperson said, “We respectfully disagree with Judge Engoron’s decision and believe that the Appellate Division will overturn this decision in due course.”